The analysis, published in the journal Proceedings of the National Academy of Sciences, looked at data on 29,000 land vertebrate species compiled by the International Union for Conservation of Nature (IUCN) Red List of Threatened Species and BirdLife International. The scientists identified 515 species with populations below 1,000 and about half of these had fewer than 250 individuals remaining.

What is a Mass Extinction Event?

A mass extinction is usually defined as a loss of about three quarters of all species in existence across the entire Earth over a “short” geological period of time. Given the vast amount of time since life first evolved on the planet, “short” is defined as anything less than 2.8 million years.

The land vertebrates on the brink of extinction, with fewer than 1,000 individuals left, include the Sumatran rhino, the Española giant tortoise and the harlequin frog. Historic data for 77 of these species shows that they had lost 94% of their populations in the last century. Further, more than 400 vertebrate species became extinct in the last century, extinctions that would have taken up to 10,000 years in the normal course of evolution, illustrating humanity’s profound effect on the planet and those that live on it.

The analysis also showed that 388 species of land vertebrates had populations under 5,000 individuals and 84% lived in the same regions as the species with populations under 1,000, creating the conditions for a domino effect. The scientists warned that ‘extinction breeds extinction’, where close ecological interactions of species on the brink tend to move other species towards extinction, creating the domino effect. 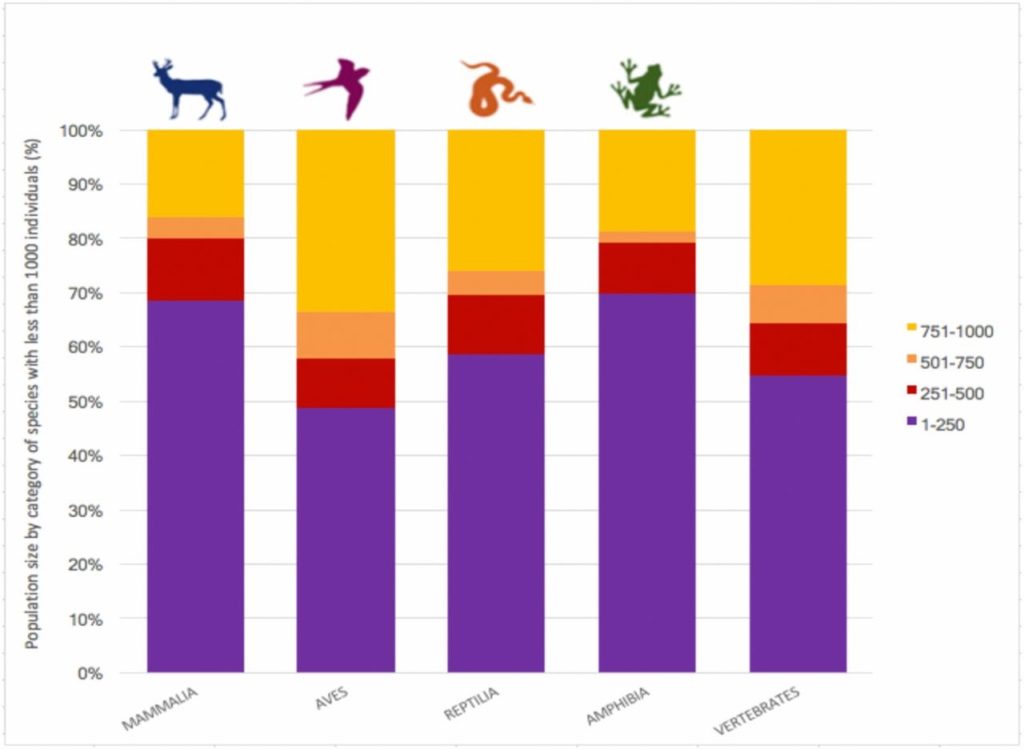 The scientists say that the ongoing sixth mass extinction may be the most serious environmental threat to the persistence of civilisation, because it is irreversible. They say that it is caused by an ever-increasing population and consumption rates. Further, species are links in ecosystems and, as they disappear, the species they interact with are likely to disappear as well.

Professor Paul Ehrlich of Stanford University and one of the researchers of the analysis, says, “When humanity exterminates other creatures, it is sawing off the limb on which it is sitting, destroying working parts of our own life-support system. The conservation of endangered species should be elevated to a global emergency for governments and institutions, equal to the climate disruption to which it is linked.”

Consequences of the Sixth Mass Extinction

When the number of individuals in a population or species drops too low, its contributions to ecosystem functions and services become unimportant, its genetic variability and resilience is reduced and its contribution to human welfare may be lost. An example of this includes the overhunting of sea otters, the main predator of kelp-eating sea urchins. A population boom of urchins wreaked havoc on kelp forests in the Bering Sea, leading to the extinction of the kelp-eating Steller’s sea cow.

Another is the bison, which was a keystone species in North America. At one time, it was maintaining the entire ecosystem, supplying meat, robes and fertilisers to Native Americans, and later to Europeans. Is it estimated that 200 years ago, there were 30 to 60 million individuals, but overharvesting for meat and skins and land conversion for farming decimated most populations. By 1844, there were 325 individuals left. They have since recovered to 4,000 wild bison and 500,000 living in enclosures, but the species has not reclaimed its ecological role and its habitats- the prairies- have been mostly destroyed.

Many endangered species are being affected by the wildlife trade, both legal and illegal, which poses a threat to human health, is a major cause of species extinction and is eroding the ecosystem services that are vital for our survival. The scientists note that the ban on wildlife trade imposed by the Chinese government could be a major conservation measure for many species on the verge of extinction if imposed properly. They propose including wild species for consumption as food as well as medicinal use and pets to curb the acceleration of the sixth mass extinction.

There have been five mass extinction events during the last 450 million years, each destroying 70-95% of the species of plants, animals and microorganisms that existed previously. These events were caused by massive volcanic eruptions, depletion of ocean oxygen or collision with an asteroid. In each event, it took millions of years to regain the numbers of species comparable to those before the extinction event.

As such, an estimated 2% of the species that ever lived are alive today. Species extinction rates are today hundreds of thousands of times faster than the ‘normal’ rates occurring in the last tens of millions of years. The losses that we are seeing have mostly occurred since our ancestors developed agriculture 11 000 years ago.

Can We Stop the Sixth Mass Extinction?

The scientists also propose classifying all species with less than 5 000 individuals as critically endangered on the IUCN list as well as implementing a global comprehensive binding agreement requiring parties to address the extinction crisis, especially through tackling the illegal and legal wildlife trade.

Mark Wright, the director of science at WWF, says, “The numbers in this research are shocking. However, there is still hope. If we stop the land-grabbing and devastating deforestation in countries such as Brazil, we can start to bend the curve in biodiversity loss and climate change. But we need global ambition to do that.”

Humanity relies on biodiversity for its health and wellbeing. The recent COVID-19 pandemic is an example of the dangers of interfering with and damaging the natural world. The scientists urge that a booming human population, destruction of habitats, wildlife trade, pollution and the climate crises must all be urgently tackled.

There is time to save species, but the window of opportunity is almost closed. We must save what we can, or lose the opportunity to do so forever. There will likely be more pandemics in the future if we continue destroying habitats and trading wildlife for consumption. The fate of humanity and most living species is at stake; it is therefore imperative that we act now.