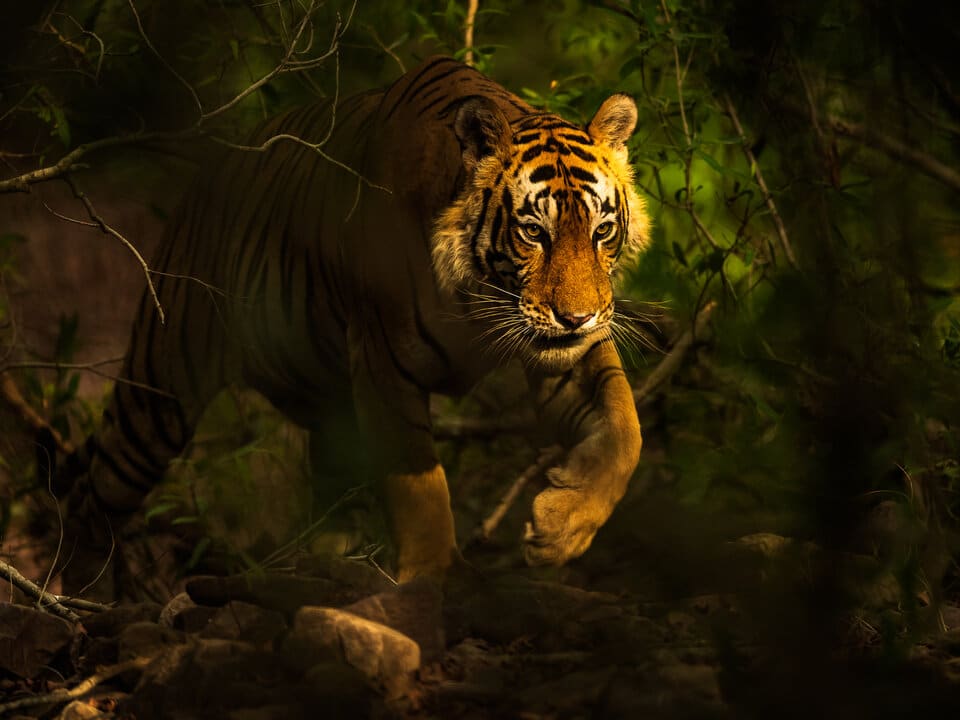 In 2010, government ministers from the 13 countries that still had wild tigers committed to implementing measures to double the number of the big cats by 2022 but Southeast Asia will highly unlikely meet the goal. Many countries in the region are actually seeing their tiger populations go extinct or decline since the pledge was made. Population declines are driven by habitat loss due to logging, plantation expansion and extractive industries; illegal trade in tiger products; poaching and snaring.

Tigers once roamed throughout the dense forested interior of mainland Southeast Asia and several islands of Indonesia. Positioned at the pinnacle of the food chain, tigers maintain ecosystem balance, and by protecting them, we can preserve entire biodiverse landscapes.

However, the long-term survival of this flagship conservation species now hangs in the balance. In 2010, government ministers from the 13 countries that still had wild tiger populations committed to implementing measures to double the wild population of the big cats by 2022.

In Southeast Asia, it is highly unlikely that this goal will be met. In fact, many countries in the region have fewer tigers now than when the pledge was made. Over the past few years, tigers have gone locally extinct in Cambodia, Laos and Vietnam; over the past two decades, Indonesia, Malaysia, Myanmar and, to a lesser extent, Thailand, have seen their tiger populations shrink.

Fewer than 600 Sumatran tigers (Panthera tigris sumatrae) remain in Indonesia, with declining trends edging their status to critically endangered. Numbers have plummeted in step with widespread destruction of their forest habitat, primarily due to logging and expanding oil palm and pulpwood plantations. Today, only two populations across the island maintain long-term viability, with more than 30 breeding females each. Moreover, both of these tiger communities are now under serious threat from planned road projects.

As elsewhere in Southeast Asia, poachers stalk tigers in Sumatra to feed the illegal domestic and international trade in tiger products. According to the IUCN, at least 50 Sumatran tigers were killed in Indonesia each year between 1998 and 2002, both for trade and as a result of human-tiger conflict.

Further north, the Malayan tiger (P. t. jacksoni) hangs on in fragmented forests in Peninsular Malaysia. According to the IUCN’s latest assessment, in 2014, the subspecies is critically endangered, with a population estimated between 80 and 120. The tiger’s main threats are habitat loss and fragmentation driven by commercial plantation expansion and resource extraction projects.

In Malaysia, development pressure even cuts into protected areas, carving up important wildlife corridors that allow tigers to roam between remaining forests. For instance, a planned iron ore mine will excavate more than 60 hectares (148 acres) of the Som Forest Reserve, which links four key Malaysian forest complexes. The access roads that serve these industries also pave the way for poachers to access once-remote reaches of the forest interior.

Alongside habitat loss, indiscriminate snaring is considered the greatest threat to tigers in mainland Southeast Asia. According to WWF, there are an estimated 12 million snares set throughout protected areas in Cambodia, Laos and Vietnam — countries where tigers are already locally extinct.

Nevertheless, collaborative efforts between government departments, NGOs and local communities to curb snaring in Malaysia are proving effective. Anti-poaching patrols led by Indigenous communities in Malaysia’s Belum Temengor Forest Complex contributed to a 94% reduction in active snares since 2017. “We now need to scale this up across the country and match it with strong political will and investment,” Sophia Lim, executive director and CEO of WWF-Malaysia, said in a statement. “Recovering Southeast Asia’s tigers will also help mitigate climate change, protect water catchment areas, reduce the impact of natural disasters, and provide livelihoods for local communities.”

Measures have also proved effective in Thailand, where Indochinese tigers (P. t. corbetti) have their last stronghold. Fewer than 200 are thought to remain in the country, but several breeding populations have been confirmed: in the Western Forest Complex close to the Thai-Myanmar border, and in the Dong-Phayayen-Khao Yai Forest Complex. Strong protection and habitat connectivity have resulted in tigers dispersing between protected areas within these complexes and also into Myanmar, where recent estimates put tiger numbers at fewer than two dozen.

Tiger “farms” are another major threat to wild tigers in Southeast Asia that continue to undermine conservation efforts and stoke the relentless trade in tiger parts. WWF estimates 8,000 tigers are held in captivity in China, Laos, Thailand and Vietnam, where they’re bred, raised and killed for their body parts. A 2019 TRAFFIC report calculated an average of 120 tigers per year were seized from traffickers between 2000 and 2018 in Southeast Asia. More than half of the tigers seized in Thailand and a third of those in Vietnam came from captive-breeding facilities.

Conservation groups are calling for governments in China, Laos, Thailand and Vietnam to phase out tiger farms and end the trade in tiger parts, regardless of the source.

The upcoming Asia Ministerial Conference on Tiger Conservation in Malaysia in November 2021 will give authorities a chance to renew commitments to boosting tiger numbers. The meeting will include proposals to increase protected area budgets to put more rangers on the ground and boost opportunities for tiger translocations and reintroductions.

“Tiger reintroduction is the most difficult tiger conservation approach, but can be successful with support from governments and within well-managed protected areas and landscapes with sufficient prey for tigers,” Thomas Gray, tiger landscape and recovery lead at WWF, told Mongabay, adding that evidence from India and Russia proves that tiger reintroductions can work.

“Possible reintroduction into Southeast Asia countries which have lost tigers, such as Cambodia, Vietnam and Laos, may be a longer-term process. But it is certainly possible if large landscapes can be secured, protected from hunting, and prey populations recover. The Cardamom Rainforest Landscape and the Eastern Plains Landscape in Cambodia both have real potential for this,” Gray said.

Ultimately, though, species reintroductions are a last resort. What tigers need most are sufficient forest habitat, ample prey and reliable protection. If tiger recovery efforts in Southeast Asia can put these elements in place, then perhaps at least population trajectories will be going in the right direction by the time 2022 comes along.