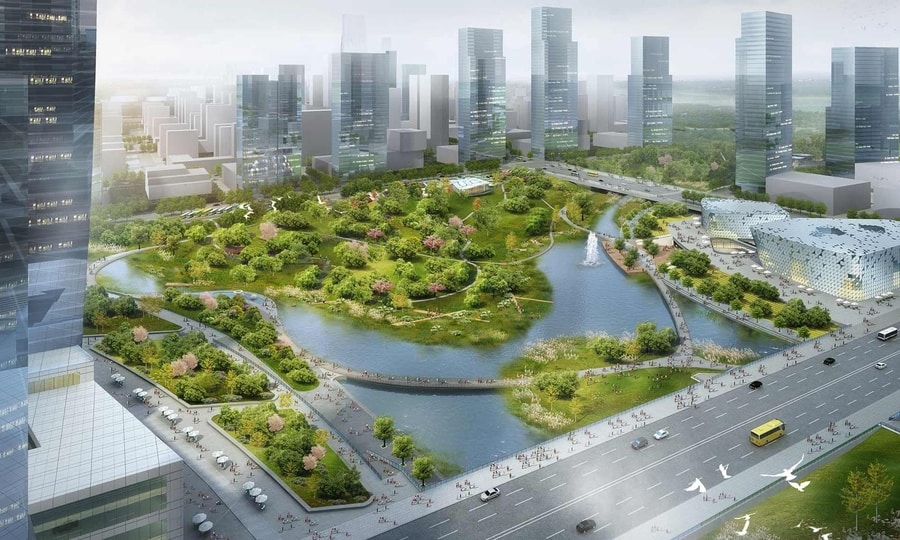 Following decades of urbanisation, overexploitation and pollution, China is now experiencing a serious water shortage and floodings made worse by the climate crisis. In July 2021, the Chinese city of Zhengzhou, Henan, battled the heaviest rain in a millennia and devastating floods that killed at least 31 people and displaced 1.24 million residents. Since early June, 24 provinces across China have suffered severe flooding, with over 443 rivers flooded, 33 of which have swelled beyond historic levels, with more than 23.85 million people affected, according to the the Ministry of Water Resources. Water-related issues have increased in frequency and intensity over the last few decades, seriously affecting China’s society, environment and infrastructure, incurring average annual economic losses of over RMB ¥251 billion (USD$36 billion) between 2007 and 2016. Adopting widespread sponge city concepts across China could reduce these risks in the country.

Many of these issues lie in the urbanisation rate in the country, which has increased by 14.5% since 2008. By 2035, 70% of the Chinese population is projected to live in urban areas, putting immense pressure on urban infrastructure, local environments and resources. This rapid urbanisation, alongside associated issues of pollution and unsustainable construction practices, is often seen as a consequence of economic reform and has created significant environmental and water-related problems in China’s urban areas.

What is A Sponge City?

Since it was conceived in 2013 by Professor Kongjian Yu, the ‘sponge city concept’ has presented an opportunity for Chinese cities to implement new integrated urban water management (IUWM) strategies. Sponge city developments seek to control and mitigate flooding, water pollution and water scarcity in urban spaces as water becomes China’s ‘most critical resource’. These developments are a new type of Chinese eco-city that offer a holistic strategy to hopefully improve the ongoing development and urbanisation processes by explicitly considering the urban water cycle.

Taking inspiration from international IUWM strategies, including sustainable drainage systems (SuDS) seen in the UK or low-impact developments (LID) in the US, sponge cities aim to control and improve urban flooding, water pollution and microclimates, recycle rainwater resources and re-instate degraded environments. The key features of the sponge city concept- to be environmentally adaptive, systematic and comprehensive, and environmentally friendly- envisions urban developments as systems that absorb, store, infiltrate and purify rainwater.

Sponge cities aim to promote positive interactions between socio-economic systems within the cityscape and with the urban water cycle to enhance local urban resilience, particularly in the face of increasingly volatile water-related disasters. China’s Ministry of Housing and Urban-Rural Development (MHURD) supports this approach through the New National Urbanisation Plan with the aim of improving sustainability and urban quality over the 2014-2020 period.

A number of crucial factors make sponge cities necessary in China: rapid and extensive urbanisation, a recognition of urban and water sustainability issues, an awareness of these issues increasing in the future with the onset of anthropocentric climate change and its multifaceted threats and the associated economic losses.

Many Chinese eco-cities are reported to struggle with inter-provincial prestige gaining and a lack of accountability in creating consistent ‘eco’ urban developments. The lack of comprehensive regulatory definitions and frameworks and the ineffective macro-scale environmental governance in China results in minimal control over eco-city planning, which promotes greenwashing that is often seen in China’s eco-city agenda. China’s sponge city concept suggests a move away from greenwashing and towards more legitimate and effective environmental planning and governance. This is due to more robust planning frameworks and defined characteristics of the sponge city concept, coupled with the high importance in mitigating flooding and water shortages to protect lives, assets and habitats. Sponge cities, if successful, will be a significant and accountable eco-centric response to the ecological civilisation movement that hopes to implement resilient and adaptive cities and combat the monumental water crisis in China.

Challenges of Sponge Cities in China

Sponge cities are a relatively new concept. Since 2014, there have been two batches of 30 different pilot sponge cities implemented across China, with 16 schemes starting in 2015 and 14 in 2016. The pilot studies, such as in Beijing, Tianjin, Wuhan and Shenzhen, are creating practical, localised experiences in implementing IUWM strategies. The State Council has set 2030 as the target for the sponge cities to be integrated into regional urban development plans. This target is progressive and ambitious, particularly considering the three major challenges that these pilots have revealed: governance, design and financing. Overcoming these challenges will be vital for the successful implementation of sponge cities.

Firstly, the current top-down shared governance mechanisms used for the sponge city program in China’s current policy domain reveals a fragmented governance structure that misses opportunities for coordinated and participatory efforts needed for sponge cities. Additionally, a study of all 30 pilot sponge cities has shown that at the provincial level, water and land-use policies and property rights make regulation and implementation more complicated. The ineffective administrative boundaries, weak regulation and complexity of IUWM strategies will hinder the success of future sponge cities.

Secondly, there are several uncertainties with urban design. As a relatively new concept, sponge city design and planning lack comprehensive standards and national guidelines that make them more challenging to implement. Many municipalities favour grey infrastructures over green and specific IUWM strategies, such as planter systems, underground infiltration or drain upgrades, are either currently unavailable for implementation or inappropriate for use and will cause further problems. Consequently, the essential low-impact green infrastructures needed for sponge cities are not readily available for use.

Additionally, topography, climate and previous city design and sector prevalence will affect the extent to which sponge cities can be effectively implemented. In the eastern Shandong province, intense human activity has threatened to dry up the natural springs in Jinan. The location of Jinan’s Xiaoqing River near water treatment plants makes it difficult to control water pollution through sponge city and IUWM strategies, preventing the effective use of green and grey infrastructures to reduce water shortages. Baicheng, in northwestern Jilin province, also suffers from water scarcity and poor water quality but for very different reasons. The cold winter temperatures, which can reach -30°C for 15 days of the year, can kill off the more effective green infrastructures such as vegetation buffers. Furthermore, the ground can become unstable due to freeze-thawing, affecting grey infrastructures such as drainage regulation systems.

Thirdly, the financing of sponge city pilots has shown various uncertainties and risks. Investments typically come from central and local government subsidies and public-private-partnership (PPP) funding. All 30 pilot schemes were allotted between 0.3 to 0.5 billion RMB from the central government for the first three years, which only accounts for 15-20% of total costs. Large-scale and highly effective IUWM strategies needed for sponge cities, such as afforestation and vegetation buffers, require tremendous financial support, yet they rarely attract non-government investment. Consequently, when central government’s subsidies and PPP investment cannot contribute enough funding, the local financial capacity may hinder China’s sponge city implementation.

China’s MHURD actively encourages PPP to help finance sponge city construction. However, a recent study has revealed that there are not many examples of successful PPP investment cases. PPP’s are mainly investments based on the performance of sponge city program, but 19 of the 30 pilot cities have experienced flooding risks and related impacts since their launch, which is not an encouraging signal for investors and puts a strain on the relations between public and private stakeholders. In some cases, such as Wuhan’s pilot sponge city development, there is even distrust between private investors and the central government, which complicates relations and decreases the chances of PPP funding. Furthermore, the lack of inclusion of the general public in the decision making process often leads to low acceptance of sponge city developments and poor cooperation between residents and investors and contractors, further decreasing the chances of success.

The sponge city concept is a strong contender as a solution to the current and future water struggles in China. Sponge cities represent a shift in environmental governance and planning in China, focusing on the increasingly evident impacts of years of resource exploitation and rapid urbanisation and seeking to mitigate the damaging implications from flooding, water shortages and pollution. Sponge city developments promise an accountable form of urban planning that steps away from green-washed eco-city plans to a more eco-centric version of China’s ecological civilisation, following a wider global trend in environmental and green-oriented developments. However, the sponge city pilots have highlighted a range of implementation challenges, such as governance issues, uncertain financing and out-of-date or unavailable urban design that will hinder sponge city implementation and its subsequent effectiveness and legitimacy. The sponge city concept is ahead of its time, and much research, policy changes, investment opportunities and progressive design solutions are needed to resolve the range of challenges for its necessary implementation.