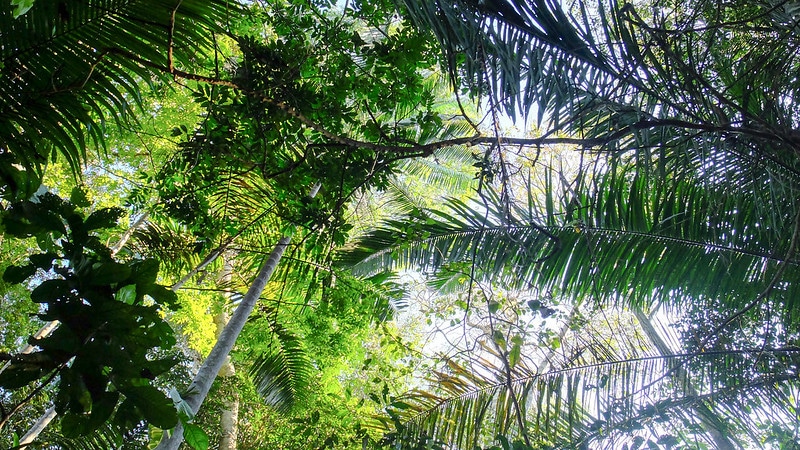 The asteroid impact 66 million years ago that killed more than 75% of all species on Earth, including all non-avian dinosaurs, triggered an ecological catastrophe that took the neotropical rainforests around 6 million years to recover from, according to a recent study published in Science. The mass extinction that followed claimed nearly half of all tropical plant species and shifted ecosystems in the Amazon from open-canopy forests dominated by ferns to the dense closed canopy rainforests we know today, the study report.

The geological period known as the Cretaceous came to an abrupt end with that asteroid strike on Chicxulub in what is today the Yucatán Peninsula in Mexico, triggering tsunamis and wildfires, throwing up a blanket of debris into the atmosphere that spread around the world, and hailing the start of the Paleogene period. To understand how this catastrophic event influenced the forests of Central and South America, researchers at the Smithsonian Tropical Research Institute (STRI) in Panama collected fossilised pollen spores and leaves from the pre-impact (late Cretaceous) Guaduas formation, and post-impact (Paleogene) formations in Bogotá and Cerrejónin in Colombia. They found that plant diversity declined by 45% at the end of the Cretaceous and did not recover for more than 6 million years.

When diversity finally returned to pre-impact levels, the Neotropical forests looked very different. Open forests with a diverse mixture of ferns and conifers had been replaced by dense, closed-canopy forests dominated by flowering plants.

“During the last days of the age of dinosaurs, the tropics were not dominated by flowering plants [and] trees grew widely spaced apart allowing light to reach the forest floor,” said lead author Mónica Carvalho, a postdoctoral researcher at the STRI. “After the extinction, rainforests became dominated by flowering plants [and the] forests became dense and multistratal, just as we see today.”

“A single historical accident, when a meteor hit the Yucatán Peninsula one morning of a day 66 million years ago, gave rise to the modern tropical rainforests,” said co-author Carlos Jaramillo, a paleobiologist at the STRI. “It’s staggering for me that the forests we see today are a by-product of [that impact].

“We are the product of history, for sure,” he added.

The researchers analysed more than 50,000 pollen spores to create a picture of pre- and post-impact plant diversity recorded in the rock formations. Pollen spores are extremely hardy, providing “a very detailed and nearly continuous record of plant diversity and overall forest composition [revealing] a very accurate picture of how diversity changes through time at a regional scale,” Carvalho said.

The researchers looked at the shape and structure of fossilised leaves, allowing them to zoom in on broad-scale patterns of diversity in individual plant families and compare them to modern forests. “Leaf fossils reflect local communities and provide more detailed information on the ecology, precipitation, structure, and natural affinities of past forests,” Carvalho said.

The results revealed a dynamic history for Neotropical forests, one that was fundamentally shaped by the Chicxulub impact. “We always tend to think the tropics is a place where nothing changes,” Jaramillo said, “but in fact the ecosystem has had a 100% transformation in only 150 million years.”

Today, “in the tropics 95% of all the plants are flowering plants, but if you go back to the beginning of the Cretaceous there was not a single one,” he said.

The fossilised leaves also held another clue about the Cretaceous forests: holes and damage revealed the effect of the asteroid impact on the diversity and feeding habits of herbivorous insects.

Cretaceous leaves showed particular types of damage on particular plant species, suggesting that insects were picky about what they ate. “We can infer that herbivore communities did not eat just any plant; rather, they were quite selective,” Carvalho said. “This is the case in the Late Cretaceous rainforests, where different plant species had very different leaf damage trace marks.”

The researchers suggested three interlinked hypotheses that might help to explain the sudden transition they found in Colombian forests: the extinction of large-bodied dinosaurs at the end of the Cretaceous removed a significant source of forest disturbance, triggering a “race for light” that caused the canopy to close; dust from the impact acted as a fertiliser, allowing flowering plants to dominate; and conifers were more likely to go extinct than flowering plants, leaving behind a new forest composition in the wake of the impact.

“All three of these ideas are, from a science perspective, very fun to think about!” said Abigail Swann, a climate and biosphere scientist at the University of Washington in Seattle, who was not involved in the study. “I’m already excited to consider what types of simulation experiments one could use to test [them].”

Today, large herbivores like elephants are known to knock over and dig up trees in forests, and dinosaurs could have played similar roles in late Cretaceous forests. “After large dinosaurs were gone, this may have enabled flowering plants to grow to their full potential,” Carvalho said.

The second factor, the short-term fertilising effect of the asteroid impact, may have also set the stage for the emergence of plants in the legume family, which can take up nitrogen from the atmosphere and release it into the soil for other plants to use. Legumes were not present in late Cretaceous forests; their emergence after the impact may have helped maintain high nutrient levels, allowing flowering plants to diversify and dominate the ecosystem. “As soon as you put nutrients in the soil the angiosperm grows so much faster than the conifer that the conifer cannot compete,” Jaramillo said.

Lessons For the Modern Amazon

Climate models have predicted that the combined effects of climate warming, elevated levels of carbon dioxide in the atmosphere, and large-scale deforestation could trigger a switch from a rainforest biome to a degraded savanna ecosystem, with knock-on effects for regional and global climate, weather, and biodiversity.

During the late Cretaceous and early Paleogene periods covered in this study, Earth’s climate was much warmer and atmospheric CO2 levels were much higher, which may suggest a more optimistic outlook for the Amazon. Although the forests were very different in structure, “both the open canopy [savanna-like] state and the closed canopy forest were able to exist under very hot and very high CO2 conditions,” Swann said, indicating that “our current tropical forest is not necessarily destined to become a savanna due to climate conditions alone.”

“Rainforests and life on Earth, in general, are perfectly capable of living under warmer conditions and higher CO2,” Carvalho said. “The problem we are facing now has to do with the velocity at which climate is changing, and of course, on top of that, the rate at which we are destroying tropical rainforests.”

Mitigating the most extreme climatic warming and rapidly halting deforestation in the Amazon will be the crucial puzzle pieces that determine whether these diverse tropical forest ecosystems can survive, she added.

“Tropical rainforest plant diversity took over 6 million years to recover after the ecological catastrophe at the end-Cretaceous. If we continue with the current rate of deforestation, habitat destruction and climate change, we will not be able to wait for another 6 million years for rainforests to recover,” Carvalho said.

“When you chop down a piece of forest, it’s a genetic pool that had taken 66 million years to develop and is gone in a few days,” Jaramillo said. “That diversity is lost forever.”

This article was originally published on Mongabay, written by Claire Asher, and is republished here as part of an editorial partnership with Earth.Org.