Scraping sounds fill the nights at Mapungubwe, a national park at the confluence of the Limpopo and Shashe rivers, where the borders of Botswana, Zimbabwe and South Africa meet. Families of elephants relentlessly tear the bark off ancient baobab trees, scraping their tusks on the trees and digging deep into their cores to extract the fibrous, moisture-rich interior.

How many baobab trees are left?

A drive through the national park reveals that dozens of these giant trees have been severely damaged, many left with gaping holes in their trunks. Biotechnician Stephen Khosa of South African National Parks (SANParks) recently completed a survey on baobab (Adansonia digitata) mortality. Of the 501 trees surveyed between 2005 and 2020, he writes in an email, 6% have died. According to a study in the African Journal of Ecology, the typical mortality rate for baobab populations is between 1.1 and 3.7%.

The baobab deaths in Mapungubwe are attributed to elephant damage and other related factors, such as a multi-year drought that started in 2015 and, possibly, groundwater abstraction from mining in the direct vicinity of the park.

However, the true mortality rate could be much higher. There is considerable uncertainty in the survey’s results: Khosa confirmed in an email that “there was a significant monitoring gap in this project between 2009 & 2020.”

You might also like: UN Sustainable Development Goals May Do More Harm for Biodiversity Than Good- Study 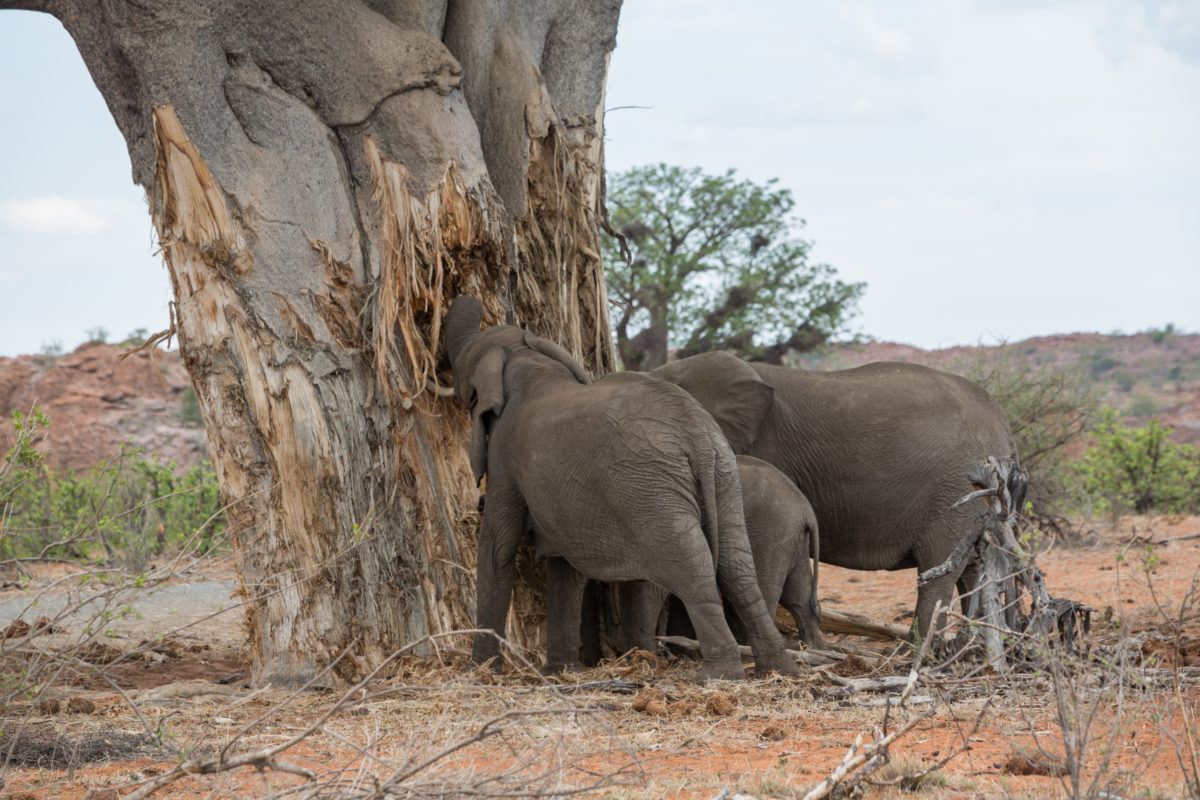 A. digitata are resilient trees: the mature baobabs here in the northern parts of Limpopo have an average age of between 300 and 500 years; the oldest specimen in Africa has been dated to 2,500 years. Jens Gebauer, at Germany’s Rhine-Waal University of Applied Sciences, calls it “one of the most impressive plants in coping with drought due to its great ability to store water in its enormous trunks. This allows the baobab to grow in very dry regions and cope with drought and heat.”

Mapungubwe is no ordinary national park. In addition to an abundance of wildlife, it is a UNESCO World Heritage site and a vital archaeological resource, home of the only known San rock art painting of a rhino and one of the best-known pieces of pre-colonial African art, a golden rhino statue. The Kingdom of Mapungubwe (900 to 1300 C.E.) was part of a trade network that stretched all the way to India and China. Ivory and gold from here were traded for porcelain and glass.

The baobabs of Mapungubwe have helped to record the kingdom’s rise and fall. A 1,000-year climatic record of the area was developed by analyzing the carbon isotope values of baobab trees. From this, we know that around 1300, a severe drought destroyed the kingdom’s agricultural base. Mapungubwe was abandoned, and its remarkable civilization shifted north to what is today Zimbabwe.

While that 14th-century drought was due to a natural fluctuation of rainfall patterns, the present drought is linked to climate change from anthropogenic greenhouse gas emissions and overuse of water resources. Southern Africa has been enduring a severe drought since 2015, heavily affecting its people and wildlife.

A 2018 analysis of the drought, led by Friederike Otto of Oxford University’s Environmental Change Institute, concluded that “the likelihood of an event like the observed 2015–2017 drought has increased by a factor of 3.3 (1.4-6.4). Unlike for other drought analyses in other parts of Africa, this is a very clear result with anthropogenic climate change having significantly increased the likelihood of such a drought to occur.”

Corli Wigley-Coetsee, an ecologist at SANParks’ Savanna and Arid Research Unit, says the Limpopo River’s water resources are overallocated and underprotected: next to diamond mining operations and open-cast and underground coal mining, at least 23 prospecting licenses for coal mining have been granted near the national park, some in the buffer zone, exacerbating water scarcity in the park.

She also points out that in the ecological system of the proposed Greater Mapungubwe Transfrontier Conservation Area, borders like the Limpopo River are no longer a barrier to elephants: the river often dries up.

Elephant populations in Botswana and Zimbabwe are under significant pressure from drought, overpopulation and poaching, and are on the move as a result. Botswana alone hosts 130,000 elephants. Many find a safe haven in Mapungubwe National Park.

With their water-rich interiors, baobab trees are part of the park’s attraction to elephants. The natural process of elephants digging into these trees doesn’t usually cause lasting damage. Baobabs have a unique ability among trees to recover their bark and tissue, says David Baum from the University of Wisconsin-Madison, who has studied the trees for more than 30 years. “Baobabs have coexisted with elephants for millions of years, which probably explains why they have evolved such a remarkable ability for regrowth,” he says.

Baobab trees have evolved to tolerate occasional elephant damage and benefit from elephants eating their fruit and dispersing the seed, Baum says. But at times of severe water shortage, when elephants exploit the trees too heavily, a baobab will eventually collapse. Some simply re-sprout. But if the structural damage is too severe, the tree can die.

According to South African baobab ecologist Diana Mayne, research suggests that lack of precipitation, climate extremes and weather fluctuations most negatively affect baobabs even when they’re not being hollowed out by elephants. “Baobabs are vulnerable to drought-induced embolism, similar to an embolism from a thrombosis or heart attack in humans,” she says.

Elephants are complex, sentient, intelligent and emotional beings responding to human-induced changes in their environment. Hennie Lötter, from the University of Johannesburg’s Department of Philosophy, an expert in the ethics of elephant conservation, says humans have a distinct moral obligation to guarantee their flourishing. In a recent paper, he writes, “We have conquered about 90% of elephant habitats and in the process we have reduced their numbers tremendously compared to the large numbers of elephants alive merely 200 years ago.”

Temperatures in Southern Africa could rise by 5-6°C (9-10.8°F) by the end of the century due to global greenhouse emissions, according to the Intergovernmental Panel on Climate Change. Severe droughts will be a regular part of the region’s future, affecting both baobabs and elephants.

Elephants no longer have room to maneuver: they are trapped between climate change, habitat destruction and poaching. For Lötter, safeguarding the space for them to flourish is bound up in the health of the wider ecosystems of Southern Africa and beyond. “We can safeguard elephant flourishing only if we simultaneously guarantee the well-being of the other members of the global biosphere,” he says, “and the healthy functioning of the global biosphere itself.”

This article was originally published on Mongabay, written by Tristen Taylor and Nathalie Bertrams, and is republished here as part of an editorial partnership with Earth.Org.

Following Earth.Org’s June 18th coverage of the mysterious illness that had killed a cluster of elephants in the Okavango Delta region in northern Botswana, it has now emerged that more than 350 elephants have died, in a mass die-off event that scientists are describing as a ‘conservation disaster’.

70% of those elephants that have died in the region in Botswana are clustered around waterholes. The government has yet to test samples so there is no information about what could be causing the deaths or whether there is a threat to humans. Anthrax has been ruled out, so the two main possibilities are poisoning or an unknown pathogen. Cyanide poisoning is another possibility, however local reports say that scavenging animals do not seem to be dying after consuming the carcasses, nor are they showing abnormal behaviour.

The slow response by the government has been met with incredulity by scientists and conservationists, with Dr Niall McCann, the director of conservation at National Park Rescue, saying, “When we’ve got a mass die-off of elephants near human habitation at a time when wildlife disease is very much at the forefront of everyone’s minds, it seems extraordinary that the government has not sent the samples to a reputable lab.”

Witnesses say that some elephants were seen walking in circles, an indication of neurological impairment, while some have fallen straight on their face, a sign of quick deaths.

Several live elephants have appeared to be weak and emaciated, suggesting that more will die in the coming weeks. However, the number of deaths is likely to be even higher since carcasses can be difficult to spot. There have been no reports of elephant deaths in neighbouring countries.

The tusks of deceased elephants have not been removed and authorities have been urged to guard the carcasses so that poachers do not take them.

Dr Cyril Taolo, acting director for Botswana’s department of wildlife and national parks, said, “We are aware of the elephants that are dying. Out of the 350 animals we have confirmed 280 of those animals. We are still in the process of confirming the rest.

“We have sent [samples] off for testing and we are expecting the results over the next couple of weeks or so. The COVID-19 restrictions have not helped in the transportation of samples in the region and around the world. We’re now beginning to emerge from that and that is why we are now in a position to send the samples to other laboratories,” he added.

Half a decade ago, with rising demand for ivory in the world market, poachers ran amok in Niassa Reserve killing thousands of elephants. In 2009, over 15,000 elephants had roamed free in the reserve that spans over 42,000 sq km–an area larger than Taiwan–in a remote part of northern Mozambique. But 70% of them were killed by 2015 as the rampant poaching went unchecked.

Life for the remaining 4500 elephants continued to be dotted by serious threats despite the national government introducing new anti poaching measures. 200 more elephants were killed in the following two years.

But a new collaborative approach taken by the government and conservationists brought the poaching death toll down to zero in the last 12 months.

How to stop elephant poaching?

The Mozambique government teamed up with two conservation groups–the New York-based Wildlife Conservation Society and the Niassa Conservation Alliance–to implement a well-coordinated anti-poaching strategy last year. The plan included aerial surveillance and deployment of a newly formed rapid-intervention police force capable of being quickly dispatched to remote poaching locations in the wilderness, in areas where poachers previously roamed unhindered by the law.

Year-round air surveillance relied on a Cessna aircraft and a helicopter. Air patrols were further strengthened during the wet summer season–a period running from December 2018 to May 2019–when the elephants were most vulnerable to poaching.

Unlike the reserve’s normal rangers, the new rapid-intervention police force was better armed and was empowered to arrest suspected poachers. The force’s ability to immediately arrest the poachers made a real impact. They processed each case within 72 hours and submitted it to the local prosecutor. Meanwhile, the government fast-tracked the cases in the court and prosecuted a number of suspects under the revised conservation law.

The government also invested more in improving Niassa’s radio communication system leading to better coordination between surveillance and enforcement teams. Besides stopping every single poacher from entering into the nature reserve, the police also cleared a number of illegal mining and fishing camps within the boundary.

Anti-poaching measures by various African nations together with an ivory trade ban by countries including China, have significantly reduced the threats African elephants face. A recent study finds that African elephant poaching rates have dropped by 60% in the last six years. The annual poaching mortality rates in sub-Saharan Africa fell from 10% in 2011 to less than 4% in 2017. Yet the rate of annual elephant losses still exceeds the birth rate. Africa’s elephant population has plummeted from an estimated few million around 1900 to a little more than 400,000, according to a survey. The recovery of elephant populations will require as much as 90 years even if poaching were to be completely eradicated from Africa tomorrow. Gaps in policy and enforcement, coupled with corruption, and sluggishness on behalf of most local governments are still major challenges that hinder conservation efforts of elephants in the continent.