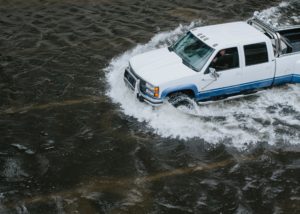 Research suggests that groundwater reserves in sub-Saharan Africa are more resilient to climate change than previously understood. But overexploitation by humans could still dwindle them.

Previous studies that indicated climate change caused rapid depletion of groundwater — the largest source of freshwater resource on the planet — had raised serious concerns among climate scientists and conservationists. But new research by a consortium of international hydrogeologists suggests that climate change may not deplete groundwater in sub-Saharan Africa.

The study — the first regional assessment to look at how climate change has influenced groundwater across sub-Saharan Africa — examined patterns of groundwater replenishment in 14 multidecadal groundwater level records from nine African countries that represent a range of climates from hyper-arid to humid. Researchers found that groundwater was consistently replenished every year regardless of the amount of annual precipitation. The replenishment process has been more sensitive to the intensity of rainfall than to the overall amount of rain.

Although the climate crisis is expected to cause less overall rainfall, the research suggests that groundwater supplies in Africa will survive because of the heavier and more intense rainfall caused by global warming. Even if annual rainfall is low, periods of intense rain will be sufficient enough to replenish local groundwater resources.

In Africa, groundwater reserves are 20 times larger than the water stored in lakes and reservoirs above ground. A vital source of drinking water for millions of people in cities and villages across the continent, these reserves are accessed through wells, boreholes, and springs. People rely more on them during droughts than other water sources on the surface, which often remain dried up during the summer. 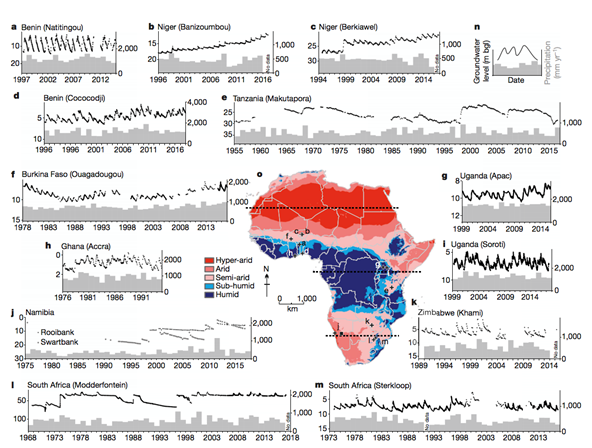 Multi-decadal groundwater levels across Sub-Saharan Africa show that groundwater recharge due to intense periods of rainfall.

The researchers determined groundwater levels analysing a relative balance between recharge — the process by which groundwater is replenished — and discharge — the flow of groundwater to springs, streams, wetlands and the sea. Individuals and companies collecting water for irrigation and drinking also contribute to reducing the amount of stored groundwater.

A comparative analysis revealed that groundwater is mostly replenished by rainfall that trickles down through the soil to the water table in wetter regions of Africa. This phenomenon occurs consistently across large areas on the continent. But in drier regions, groundwater is mostly recharged locally by water leaking from temporary streams and ponds, which usually start overflowing after heavy rains.

Scientists consider these findings path-breaking because previous studies had ignored an important fact about groundwater replenishment. “Previous regional-level assessments of groundwater resources using large-scale models had ignored the contribution of leaking streams and ponds to groundwater supplies, underestimating its renewability in drylands and resilience to climate change,” says co-lead of the study Dr. Mark Cuthbert from Cardiff University.

Those studies based on computer models had earlier predicted that freshwater will become scarcer in African drylands as climate change continue to reduce rainfall. But, the reality appears to be the opposite as per these findings: global warming is making rainfall come in fewer but heavier bursts accelerating overall groundwater replenishment.

These findings debunk myths of groundwater depletion in Africa and will encourage policymakers to adopt new strategies to meet the United Nations’ Sustainable Development Goals (SDGs) like food security and access to clean water. Food production on the continent can be improved by allocating groundwater for irrigation through sustainable resource management, which can also ensure safe drinking water for generations to come.