The European Union claims to be a leader in implementing climate change mitigation strategies. Under the Paris agreement, it has pledged to reduce greenhouse gas emissions by at least 40% and produce 32% of its energy from renewable sources by 2030. The European Commission’s new President Ursula von der Leyen wants to make Europe the first climate-neutral continent by 2050.

However, the EU has ignored a key area in its fight against climate change: agriculture, which is responsible for about 10% of Europe’s greenhouse gas emissions. Its Common Agricultural Policy (CAP), experts warn, encourages environmentally destructive farming practices that cause large scale emissions and the degradation of natural resources at an alarming rate. The continent’s rich biodiversity has also suffered because of those practices.

Launched in 1962 to sustain the EU’s food supplies by boosting the productivity of farmlands, the CAP is a cornerstone of Europe’s agricultural policy. With a budget of more than €58 billion a year, it provides financial support to some 12 million farmers across Europe.

A report by Alliance Environnement, a union of environmental advocacy groups, finds that the CAP has allowed farmers to plough up permanent grasslands, thus releasing large volumes of carbon dioxide into the atmosphere. It also allowed large-scale cultivation on peatlands which store twice as much carbon as all the world’s forests.

Wetlands in Europe were species-rich habitats performing valuable ecosystem services such as flood protection, water quality enhancement, food chain support, and carbon sequestration. However, the CAP encouraged farmers to convert vast tracts of wetlands into agricultural lands causing significant biodiversity loss. Intensive use of pesticides has also led to species loss in many parts of Europe including France, which receives the largest agricultural subsidy under CAP.

An investigation by Greenpeace revealed that CAP funds provide direct incentives for the widespread use of harmful and polluting agricultural practices. More than half of the farms examined by Greenpeace in seven EU countries had received payments totaling €104 million despite being the highest emitters of ammonia in their countries. Ammonia runoff from fertilisers and slurry manure has led to the rapid growth of algae in rivers, lakes, and oceans in Europe choking plants and animals of oxygen as well as causing air pollution.

Another report reveals the EU’s farming sector has shown no decline in emissions since 2010 due to a lack of effective environmental regulations in the CAP. Even if an individual state wanted to introduce new regulations in the agricultural sector, CAP provisions would not allow for them.

According to WWF, CAP has done very little to effectively support low-carbon and nature-friendly farming because it only supports market-driven high-input farming practices whilst disregarding climate commitments. It has demanded major reforms in the EU’s agricultural policy to reduce the sector’s carbon footprint.

“We can achieve wins for both the climate and the farming sector’s sustainability by cutting emissions rapidly, and adopting practices that help store more carbon in soils and landscapes,” says Imke Lübbeke, head of climate and energy, WWF. “The EU’s draft long term climate strategy shows that agriculture can and should do more to achieve net-zero emissions in Europe.”

The latest campaign by WWF warns that man-made noise causes chaos in the Arctic marine ecosystem, where whales once thrived for thousands of years safely under the thick sea ice cover. Global warming cracked open the ice shields and let the men enter with their commercial ships, tourist cruises, and fuel exploration vessels.  Their unsettling noises damage whales’ hearing and impede their communication.

Earth’s northernmost waters are never quiet. Every day, the whistles of beluga whales and the grunts of humpbacks compose underwater symphonies in the Arctic Ocean. The natural orchestras that nurture the lives of Arctic whales are now disrupted by invasive and dangerous man-made noise.

Doom of the last acoustic refuge

Scientists once saw the Arctic Ocean as ‘the last acoustic refuge’ for marine mammals. But that was before the ice started melting exponentially.  An analysis of three decades of data by the US National Snow and Ice Data Centre (NSIDC) reveals that the extent of Arctic sea ice loss in the last four years hit the highest rate ever.

The absence of thick ice prompted maritime traffic in the Arctic waters. In 2017, for the first time, a giant Russian commercial LNG tanker sailed across the northern route from Europe to Asia without the protection of an ice-breaker. The imminent doom of whales’ last natural sanctuary thus became obvious.

Currently, the four main trans-Arctic routes of commercial navigation see a steep increase in traffic year by year. In the northern route alone, the Russian government predicts, the cargo turnover would grow tenfold by 2020. WWF warns that Arctic sea traffic will quadruple by 2025.

There is an emerging trend of whale-watching tourism, cruise ships and boats carrying scores of travellers across the arctic waters- Skjálfandi Bay in the northern coast of Iceland draws more than 100 000 tourists every year. Whale-watching boats operate from 8 am to 11 pm all year round. 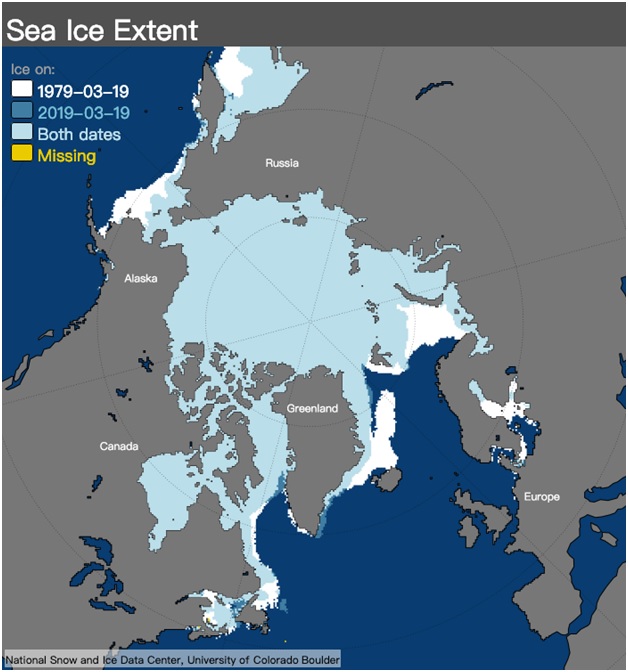 The Arctic sea ice extent is declining at a rate of 12.8 percent per decade since 1979 (Photo: National Snow and Ice Data Center)

WWF explains that marine mammals heavily depend on acoustic information to survive the underwater environment where it’s always dark.

Research published in the scientific journal Biology Letters last year by oceanographer Ms. Kate Stafford and her team points out bowhead whales, an endangered Arctic whale species can sing up to 24 hours to attract mates during breeding season. Analysing five years of data Ms. Stafford, Associate Professor at the University of Washington, reveals that bowhead whales make new and diverse songs each year.  The round-foreheaded belugas—nicknamed as “the canaries of the sea”– are considered the most vocal among whale species. They use diverse clicks, whistles, and clangs to communicate, navigate and locate food. The humpback whales, on the other hand, compose new tunes each year to mate- like the behavioral pattern of the bowhead whales.

The man-made noise of ships overlaps the vocal frequency of whales and interrupts their communication. It hampers their navigation and cripples their ability to detect dangers. Sounds to them are like eyes to human. Man-made noises mask their senses.

Many whales stop singing when heavy ships pass by. Although some other species like the begulas try to overcome their challenge by changing their vocalisation level, the increasing number ships may soon exhaust them.

Industrial activities such as oil and gas exploration pose a great danger to them. Seismic air guns used for searching fuel deposits generate intense, acoustic impulse signals. The noise is louder than a jet’s take-off and can travel over 2,000 miles. Marine mammals experience temporary or permanent hearing loss when they get exposed these air gun blast—just like a human.

A 2017 study highlighted that air gun blasts can double the death rate of zooplankton, jellyfish, shrimps and sea snails.  The result is a disturbed oceanic food chain with the whale species, which feed on these small creatures, face starvation. 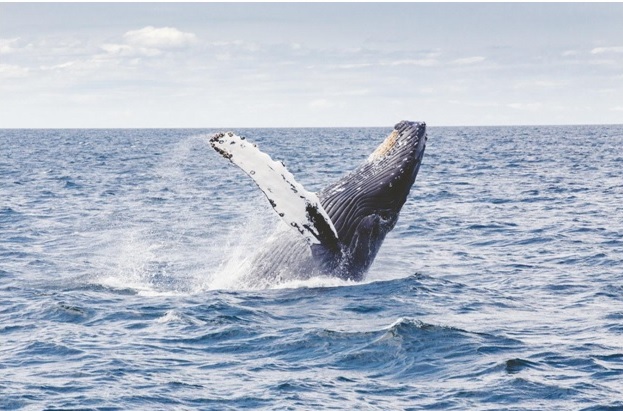 Humpbacks are known for ‘singing’ to attract mates. (Photo by Thomas Kelley/Unsplash)

In their campaign, WWF urges the eight Arctic States, including Canada, Norway, Russia, and the US, to take action to stop the noise pollution. Experts have suggested practical solutions to the problem.

One simple step for mitigation is to slow down ships’ speed. Belén García Ovide, a Spanish marine biologist, who studied acoustic effects on whales for more than five years, says a boat’s speed is the biggest single factor of noise intensity in the ocean. Research published last year in Acoustic Society of America also sees the potentials in reducing acoustic masking by lowering cruise ships’ speed from 25 knots to 15 knots (equivalent to about 17 mph to 11.5 mph).

Quiet-ship technology is also an efficient way to deal with the noise. However, WWF points out existing technologies, which are designed to produce quiet military vessels, are either too expensive or unfit for the size of commercial ship engines.

The International Maritime Organisation (IMO), in charge of leading the implementation of ship-quieting technology, drafted a set of voluntary guidelines in 2014. The implementation of these guidelines might yield some positive results. WWF recommends regulations such as limiting vessels’ access to port facilities if they cannot meet noise level requirements.