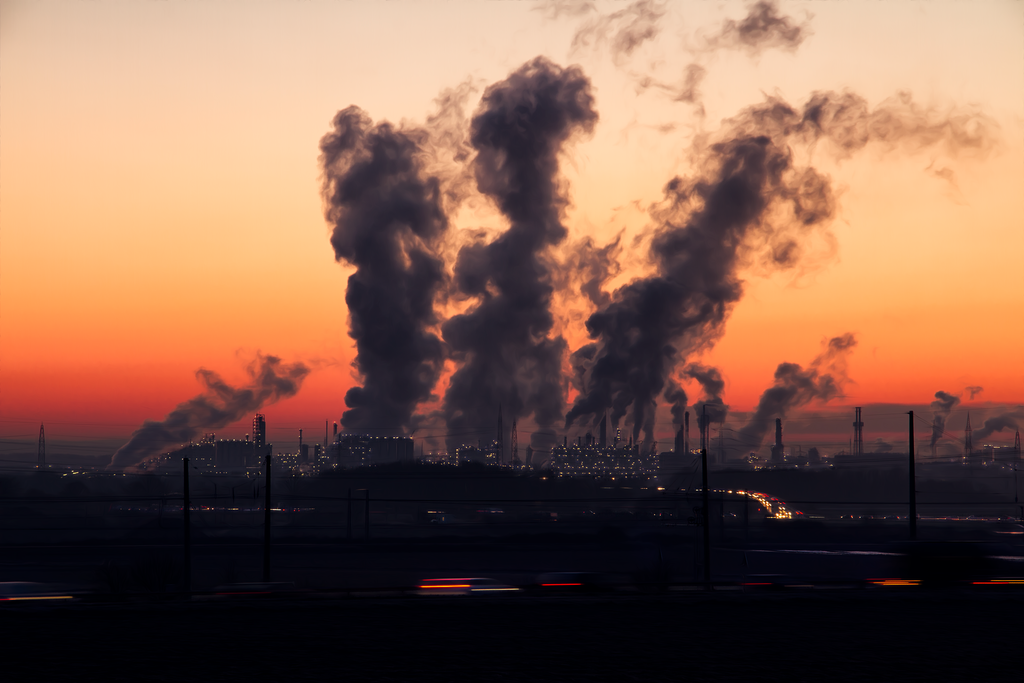 China’s clean energy investments are plummeting, having decreased 39% in the first half of this year from the same period last year. At the same time, construction of new coal plants is set to equal the capacity of all coal plants in the EU. As the world’s biggest carbon emitter, how can China still be expanding its coal production with the 2°C Paris Agreement target in mind?

A recent statement published by a group of 11,000 scientists warned of ‘untold human suffering’ unless radical climate action and lifestyle changes occur, adding that the Earth is now facing a ‘climate emergency’.

It’s not all bad news, however: this year, coal-generated electricity is expected to see its biggest global reduction on record. During the UN Climate Action Summit in New York, António Guterres, the UN Secretary-General, brought world leaders together in a bid to encourage faster reduction of emissions under the Paris Agreement and he specifically called for member countries to end all new coal developments by 2020. As one of the most carbon-intensive natural resources, coal is at the heart of debates about the climate crisis and emissions. With this in mind, questions arise as to why China is increasing its coal production capacity and decreasing its green energy investments.

In its Renewable Energy Development Five Year Plan established in 2016, China outlined its objectives to include increasing installed renewable power capacity to 680 GW by 2020 and installed wind capacity to 210 GW. Because of these commitments, China has been touted as the next ‘renewable energy superpower’.

Despite this progress, clean energy investments across Asia are plummeting, coinciding with an increase in coal production. China, the world’s biggest carbon emitter, accounts for most of this decline. The nation put US$86 billion into clean energy projects in 2018, down from US$122 billion in 2017, as it cut renewables subsidy programmes to control ‘soaring’ costs. Despite this financial concern, a report by the Global Energy Monitor reveals that China expanded coal production by nearly 43 GW between January 2018 and June 2019, far above an 8 GW decline across the rest of the world as more plants closed than were opened.

The territory doesn’t seem to be stopping anytime soon: coal plants roughly equal to the coal capacity of the entire EU are under construction, amounting to around 121 GW. The Global Energy Monitor report argues that an increase in coal capacity is incompatible with the Paris Agreement target of keeping global warming below 2°C by 2100; as it is, if current activities are continued, this target is optimistic. The UN’s Intergovernmental Panel on Climate Change (IPCC) has found that sticking to this target requires a 58%- 70% reduction from current levels in global coal power generation by 2030, and a 90% reduction by 2035.

China’s total coal-fired power capacity stands at more than 1000 GW. The country needs to close more than 40% of that to stick to greenhouse gas reductions required to meet the 2°C target. China’s increase in coal production will entirely offset global declines in coal power use across the rest of the world. 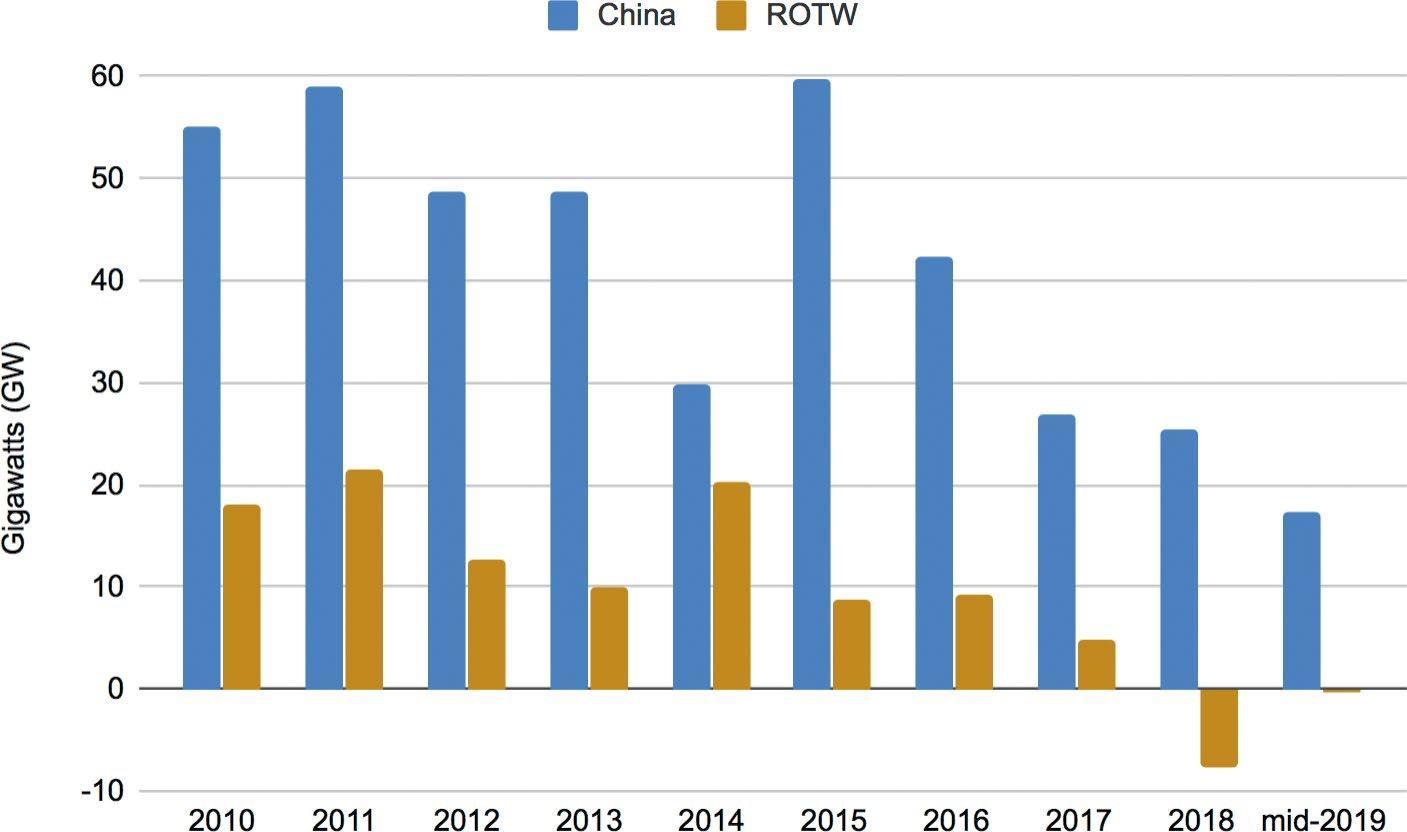 Under the Paris Agreement, countries have united to adopt nationally determined contributions, or NDCs, which incorporate efforts by each member country to reduce emissions and adapt to the impacts of climate change. However, a recent report found that the current NDC ambitions need to be tripled for emission reductions to be in line with the 2°C target. Despite these numerous and hard-hitting warnings, global CO​2 emissions from fossil fuels are continuing to grow by over 1% annually and 2% in 2018, reaching an all-time high. China’s emissions are expected to rise about 3% this year.

In 2015, in an attempt to curb the growth of coal production and usage, the Chinese national government tried to clamp down on new-build coal. However, it continued to allow provincial governments the freedom to permit new coal plants. This resulted in local authorities permitting up to five times more coal plants.

China’s economy grew 6% in the third quarter of 2019 compared with a year earlier, its slowest pace in 30 years. The Financial Times argues that this revived push for coal is driven by two main economic factors, namely that Chinese energy companies are desperate to gain market share and local governments still view coal plants as a source of jobs and investment, especially in regions like Shanxi, which relies on the fuel for half of its jobs and 80% of its energy.

The nation commands half of the world’s coal-power capacity, with some plants only operating half of the time, creating the opportunity for their use to grow quickly. It is vital that both the long-term economic and environmental impacts of this coal rush be considered further.

According to the Global Energy Monitor’s report, the way to do this lies with the Chinese government. It argues that existing policies discouraging coal plant building should be strengthened, such as reducing guaranteed operating hours and rates of return for new coal plants, and incentivising low-carbon power over coal.

China is still the leading investor in renewable energy globally, so sticking to this message is crucial for meeting the Paris Agreement targets and mitigating the impacts of anthropogenic climate change.

However, China is adamant that coal is part of its long-term vision, explicitly defying the Paris Agreement. “We continue to work hard to advance the fight against climate change, but we are indeed facing multiple challenges such as developing the economy, improving people’s livelihoods, eliminating poverty and controlling pollution,” said Zhao Yingmin, China’s Vice Minister of Ecology and Environment at a recent briefing.