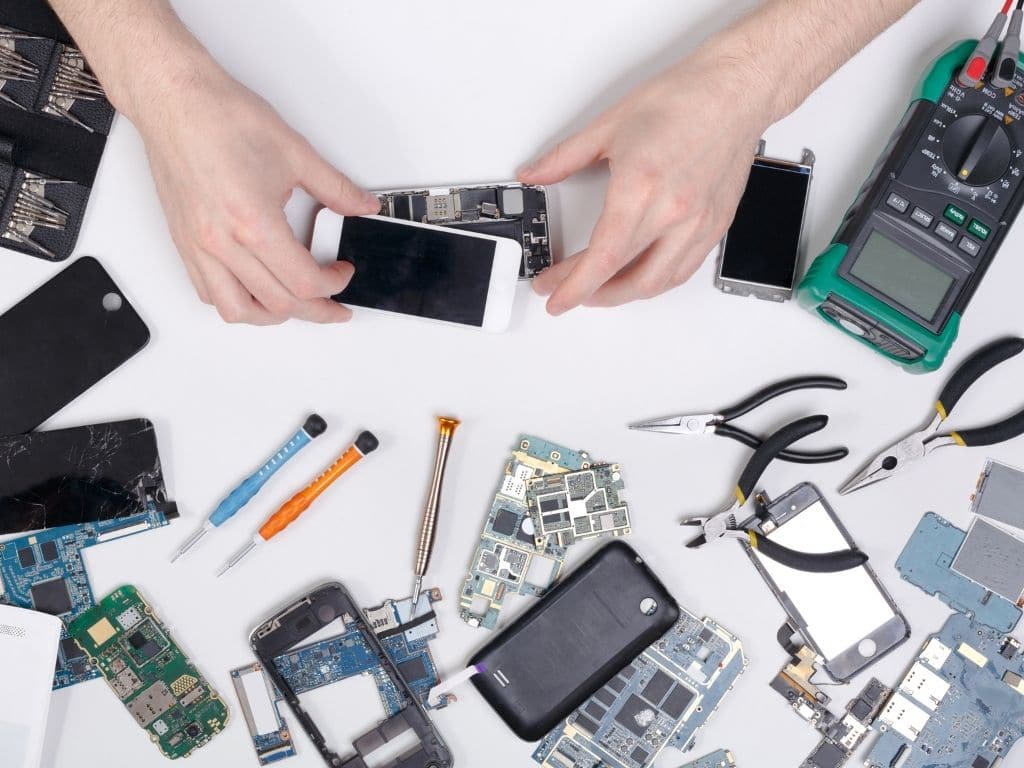 Every day, instead of repairing their broken phones, consumers discard hundreds and thousands of smartphones and replace them with newer ones because repairs are expensive and difficult. During the pandemic, as the hospital rooms began to fill, ventilators began to break, and the hospitals were not able to fix them. This electronic waste then finds itself in landfills and into the ocean. While the use of technology has made much advancement to machines, it has left them more controllable by the manufacturer, which has led to the rise of ‘Right to Repair’ – a movement dedicated to giving consumers the right to repair their own devices, rather than buying newer ones.

The increase in consumption of electronics, and consequently the frequency with which the waste is produced, has major ecological effects. Firstly, it has significantly increased the unsustainable process of mining that’s required for the materials needed to produce technological products and while a phone’s glass screen display is no longer laced with mercury and arsenic, most smartphones now run on lithium in batteries from which the metals are mined from salt flats in Argentina and Chile using large amounts of energy and water. Secondly, discarded devices produce large quantities of electronic waste, otherwise known as e-waste. The use of semiconductors and the entrance of new players from Brazil, China, and India has made the manufacturing of electronic portable devices relatively inexpensive while the inconvenience, difficulty, or high costs of repairs have made new purchases more appealing. If not disposed of properly, toxins from e-waste enter the soil and water, raising concerns about water pollution, soil pollution, and more.

Firms have been pushing consumers into buying new items by artificially reducing lifespan of products for a long time. In 1924, a cartel between Osram, Phillips, Tungsram, and General Electric, which was dissolved in 1939, ensured that light bulbs would not exceed an expected lifespan of 1,000 hours. More recently, Apple was accused of slowing down old iPhones after widespread complaints which led to people having to replace their phones which, according to investigators, boosted iPhone sales “potentially by millions of devices per year”. Intentionally or not, manufacturers have been employing various ways to make repair difficult, such as using proprietary screws, declining to publish repair documentation, or gluing parts together.

However, the urgency for repairing devices, rather than replacing, really began during the pandemic. As ventilators broke, hospitals were constrained by medical technology manufacturers, who frequently kept repair instructions from the public, forcing hospitals to consult only with authorised repair technicians and even led to instances of biomedical technicians hacking into ventilators.

The Right to Repair movement is a part of an anti-consumerism ideology that is opposed to consumerism and the continuous buying and consuming of material possessions. This movement has been gradually gaining power in the US and Europe. The Repair Association, a right to repair advocacy group, has put forward several policy objectives:

This has been opposed by technology giants, which impose limits on who can repair phones and other devices, saying that independent repair could lead to security risks by giving criminal access to technical information, safety risks from unauthorised repair, and risks to intellectual property.

Earlier this year, President Biden signed an executive order that announced his support for better consumer protection for repairs and the Federal Trade Commission then voted unanimously to better enforce laws around the right to repair, bringing us a step closer to a greener economy.

In the UK, new rules put into place since this summer has made manufacturers be legally obligated to make spare parts for products available to consumers for the first time. This aims to extend the lifespan of products by up to 10 years and is estimated to reduce 1.5 billion tonnes of electrical waste each year.

Unnecessary waste from electronics is a major threat to the environment and is the fastest-growing waste stream in the world. For the longest time, large companies have been ensuring ways to reduce lifespan of their products and making repairs expensive and difficult, pushing consumers towards buying new products. However, with movements such as the ‘Right to Repair’ movement, which are being opposed by the technology giants, progress is being made; as this can be seen through the new rules that are being, or will be, implemented around the world.