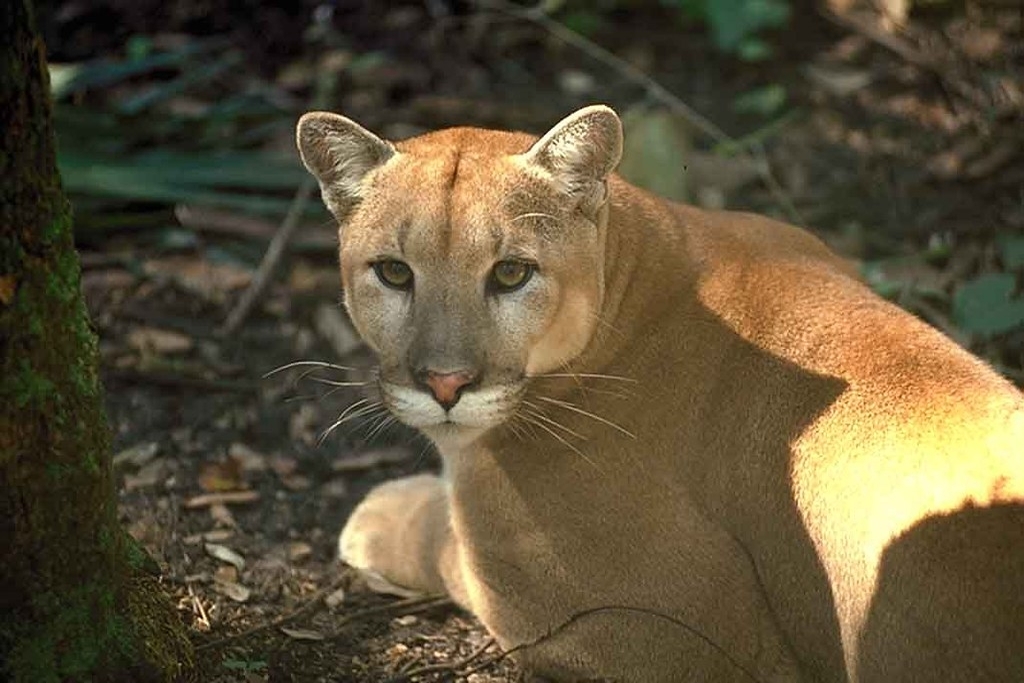 Veiled by the luscious resorts, vibrant theme parks and crystal-white sands of Florida, an ancient wilderness lives on. The ancestors of the Florida panther once roamed freely throughout the Southeastern United States. These days, however, rapid human development has driven these magnificent cats to an ever-decreasing range in the Southwestern tip of Florida.

The Florida panther is striking in its physique, calculated in its movements, and extremely rare. These big cats, recognised as Florida’s official state animal, are distinguished by their tan fur, whitish-grey chests and bellies, crooked tails, and prominent black markings on the tips of their ears, tails and snouts. Males can weigh up to 73kg and measure up to 2m in length, while females tend to be slightly smaller in size. Individuals can live up to 12-15 years in the wild.

Where do the Florida panthers live?

Florida panthers inhabit warm habitats consisting of wetlands, swamps and mature upland forests. They hunt a variety of prey including feral hogs, white-tailed deer, raccoons and armadillos. Solitary in nature and extremely territorial, Florida panthers can occupy ranges up to 650 square kilometre, travelling up to 32km per day.

A combination of bounty hunting, extensive habitat loss and automobile collisions have made the Florida panther one of the rarest and most endangered mammals in the US. Although the species is not acknowledged by the International Union for Conservation of Nature (IUCN), it has been recognised as an endangered species since 1973 under the Endangered Species Act. Florida panthers once occupied ranges all across Florida, Georgia, Alabama, Mississippi, Louisiana, Arkansas and parts of Tennessee and South Carolina. Today, their territory in Southwestern Florida is less than 5% of what it once was.

Why are Florida panthers endangered?

Florida panthers were hunted extensively in the 19th century after a bounty was placed on them in 1832 as they were perceived as a threat to humans, livestock and game animals. By the mid-1950s, the species was almost extinct. The Florida Fish and Wildlife Conservation Commission estimated in 2017 that the remaining Florida panther population rested somewhere between 120-230 individuals, but even the most optimistic estimate of 230 individuals is not a sustainable population size.

The Florida panther is considered an umbrella species due to its exceptionally large ranges, which means that a wealth of other species are indirectly conserved when panthers and their ranges are protected. Some examples include bobcats, Florida black bears, Florida turkeys and white-tailed deer.

Florida’s rapidly increasing human population is the greatest threat to the future of the Florida panther. The state’s population has almost tripled in size since Florida panthers were first listed as an endangered species, expanding from 7.9 million people in 1973 to almost 22 million people today. The state is expected to grow even more in the next 50 years, with an average of over 900 people moving to Florida every day and projected losses of up to 5 million acres of farms, forests and unprotected land by 2070.

Florida’s extreme population boom has generated a huge uptick of urban and suburban sprawl, residential development, road and airport construction, loss of farmland and other forms of land conversion. Consequently, panther habitat loss has occurred at a rate of approximately 1-2% annually, a margin which is unsustainable for the species. Alarmingly, counties in panther ranges are among the fastest-growing regions in the US.

Habitat loss, fragmentation and degradation in Florida have had devastating effects on the Florida panther population. Decreasing panther numbers have led to inbreeding, which has resulted in a slew of health issues including genetic depression and disease spread. Other serious threats to the survival of the panther, all stemming from habitat reduction, include mortalities due to vehicle collisions, mercury poisoning, lack of landowner acceptance and cooperation and a general fear and misunderstanding of the species.

The plight of the Florida panther might be grave, but it is not too late to save the species. The U.S. Fish and Wildlife Service, according to its 2008 Florida Panther Recovery Plan, will consider removing the Florida panther from the endangered species list once three populations of at least 240 individuals each (excluding dependent-aged kittens) have been established and maintained for at least 12 years and once sufficient habitat has been secured to support them long-term. When compared to smaller populations, panther populations exceeding 240 individuals are more able to maintain a high level of genetic variability and have the ability to withstand some habitat loss or mild disasters.

There are many individuals, groups, and organisations working to save the Florida panther. The 26 400-acre Florida Panther National Wildlife Refuge, located just over 30km east of Naples, Florida, was established in 1989 to protect Florida panthers and their unique habitats. More recently, The Florida Panther Recovery Implementation Team was formed in 2013 with the sole purpose of achieving the goals of the 2008 Florida Panther Recovery Plan. Several dozens of wildlife underpasses, overpasses, high fences and warning signs have been constructed on roads in Florida’s primary panther habitats to help combat habitat fragmentation and reduce panther mortalities caused by vehicle collisions.

But there is still much more to be done. Thomas Hoctor, a landscape ecologist at the University of Florida, cites rising sea levels as an imminent threat to the panthers’ current range. In order for the species to survive long-term, Hoctor believes it is crucial for Florida panthers to extend their ranges northward into the millions of acres of territory in northern Florida.

In order to achieve higher numbers and northward range expansion, wildlife experts may employ a conservation technique similar to one utilised in 1995, in which eight female Texas cougars were released in South Florida to breed with Florida panthers. This interbreeding produced a healthier, more resilient generation of panthers, with the panther population in Florida tripling by 2007.

Further research, conservation initiatives and public support will be paramount in the ongoing movement to save the Florida panther. The plight of the Florida panther presents humanity with an opportunity to reverse its destructive pattern of abuse against the planet and those that inhabit it.