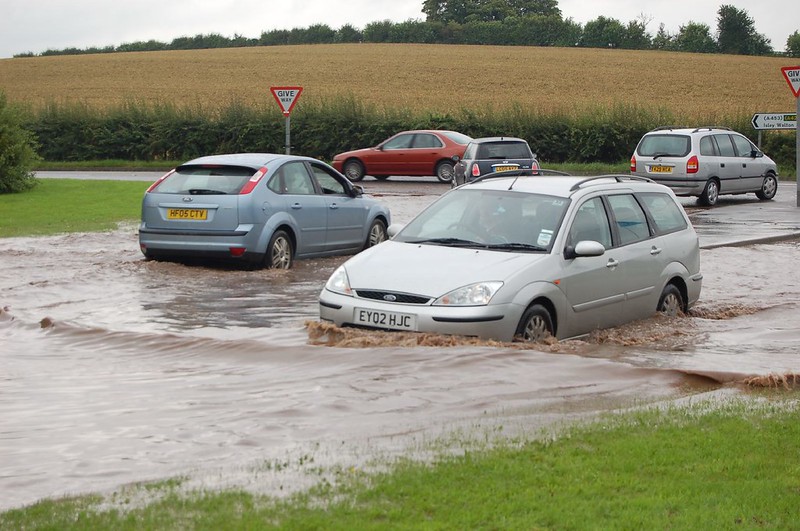 In complete contrast to the climate skepticism and inaction that has dominated the Trump administration’s environmental policies, the Commodity Futures Trading Commission (CFTC), a federal government agency, issued a report acknowledging that frequent and devastating shocks from climate change are a menace to the financial stability of the US. Central banks and corporates are waking up to the crisis and taking steps to build resilience, but political inertia can stand in the way.

“It’s the first time something like this has been done under the auspices of a US financial regulator,” said Dave Jones, a former insurance commissioner for California and one of the 34 industry leaders who put the report together. The 200-page report gives a comprehensive look at climate-change-induced risks to all financial markets, translating data and scientific revelations into language that Wall Street professionals and regulators understand. It includes projections of the fiscal impact that climate change and subsequent inaction could have on the US ‘ troubled economy amid the coronavirus pandemic and predictions of intensifying downpours and more potent hurricanes. It also offers 53 recommendations on how the sector and policymakers can address the elephant in the room.

The warning could not have come at a more vital time. The risks of climate change (and inaction) are looming and ever-growing across the US and around the world. The impacts of climate change are already manifesting in the largest state economies. The “one-two punch” of hurricanes along the Gulf Coast, the blazes sweeping across California and the now-routine flooding in Florida are only a fraction of the climate-related calamities that have wreaked havoc on US soil.

“By the end of this century, the negative impacts on the United States from climate change will amount to about 1.2 percent of annual gross domestic product (GDP) for every 1 degree Celsius increase,” the report estimates. This is tantamount to wiping out nearly half of the average annual GDP growth rates in recent years. “There is great uncertainty about how those losses may be distributed across the US and within any given sector or asset class,” but how some sectors are impacted can hint towards what could come in the next decade. 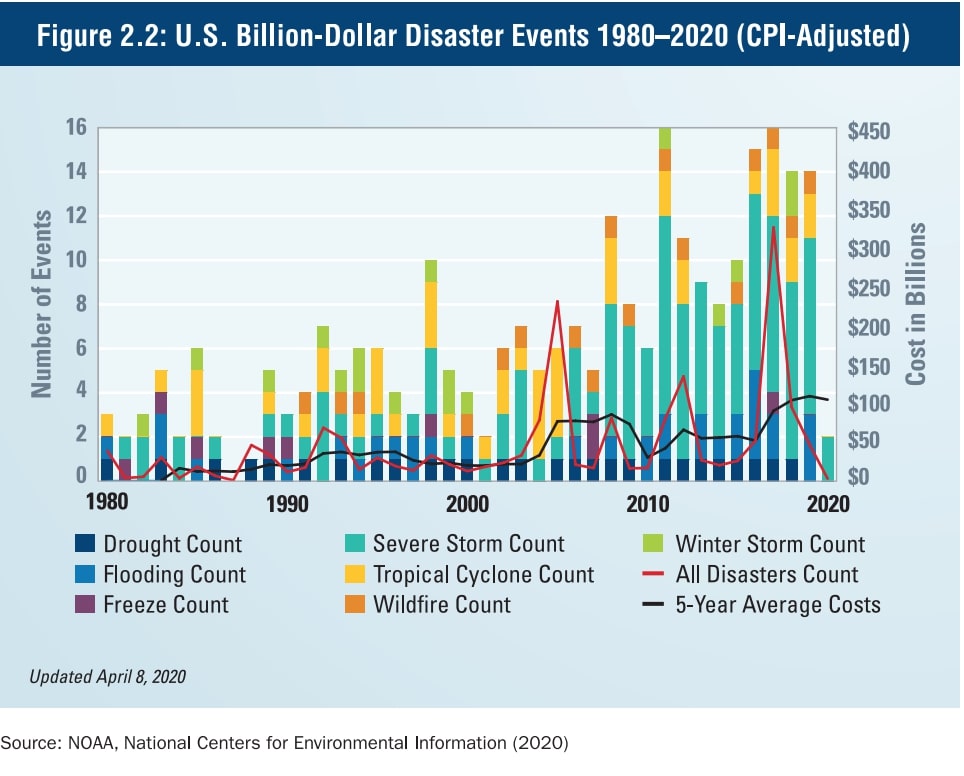 The farming industry, which contributed USD$1.053 trillion to US gross GDP in 2017- a 5.4% share according to the Economic Research Service– now bears the brunt of the damage caused by climate change. In 2019, historic rainfall and flooding devastated the Midwest, costing the region more than $400 million worth of livestock and more in damage and flooded farmland.

The scorching heat can be just as damaging to the health of an economy as excessive precipitation. By 2090, total impacts from extreme heat attributed to climate change could result in more than 2 billion lost labour hours, representing $160 billion (2015) in lost wages. “Companies that rely on outdoor and manual labour may face physical risks from declining labor productivity and higher costs associated with workers’ compensation, health insurance and general liability insurance,” the report says.

Physical risks such as these have taken up much of the media’s front pages. Less visible, but just as powerful, are the transition risks that constitute a bigger part of the story of the economic threats. Transition risks arise when companies fail to adapt to changes in policy, technology and consumer behaviour as the world moves towards a net-zero economy. 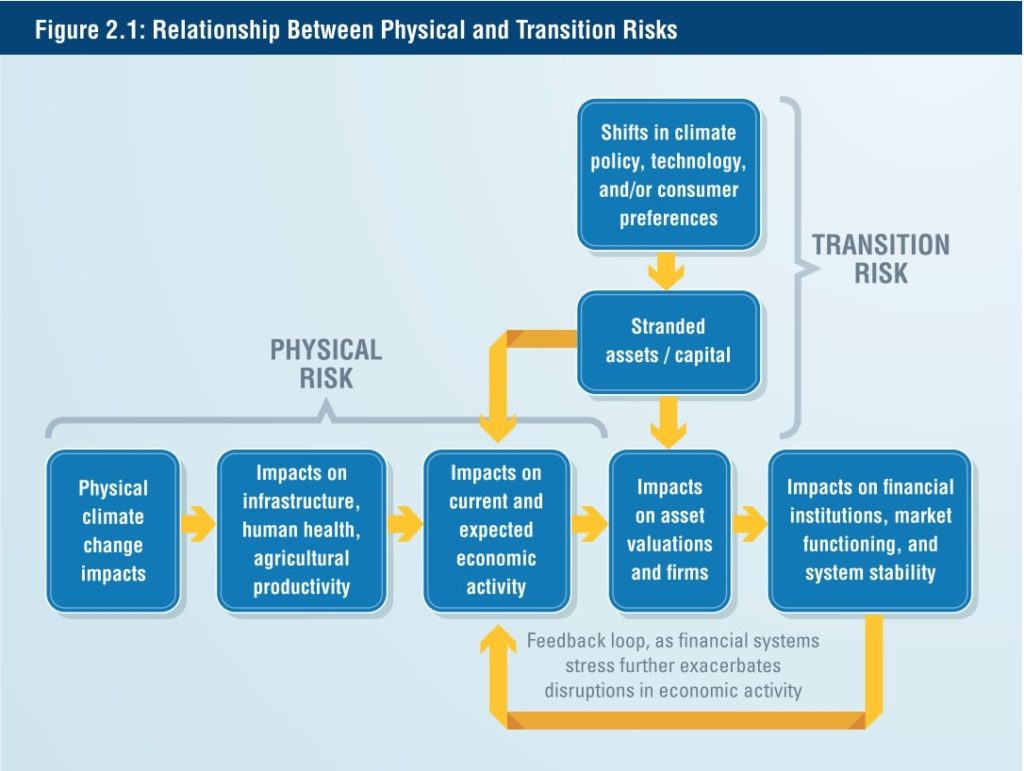 These risks are already nascent in banks and companies’ balance sheets. In 2018, Germany saw its weakest economic performance in five years. The recession hit in part due to the new EU emission tests, which have hampered auto production, one of the country’s pillar industries. That same year, Jaguar and Land Rover wrote off £3.6 billion, largely due to uncertainties around Brexit and diesel engines. Their depreciation could make them a risky investment to investors and banks.

What happened in Germany could happen to the US at any time. The report says that the financial system might be able to absorb the effect of climate change here and there, but when its spillover effects start to happen, more fundamentally, it is the underlying drivers of these risks that need to be addressed.

“A fundamental flaw in the economic system lies at the heart of the climate change problem- the lack of appropriate incentives to reduce greenhouse gas emissions,” the report says. For decades, economists have contended that pricing carbon emissions is one of the simplest and most efficient ways to address the “negative externalities” of fossil fuels. Negative externalities are situations when there is an external cost that accrues to other people or society as a whole.

In the case of greenhouse emissions, an additional cost has been shifted to society as a negative externality in the form of future climate impacts. As estimated in 2016 by the federal government, the quantifiable economic damage associated with a small increase in carbon emissions amounts to $52 per metric ton of CO2 in today’s dollars. However, many experts agree this is far lower than the true costs of carbon pollution. In the absence of an “economy-wide price on carbon that reflects the true social cost of the emission,” all manner of financial instruments- stocks, bonds, futures and bank loans- will not factor in those risks in their calculus. Hence, the mismeasurement of known risks, which, as they build up, can eventually cause “a disorderly adjustment of prices.”

Undeniably, there has been a growing nervousness among US investors about swiftly mounting environmental risks in the sector. Last year, executives from more than 75 companies, which altogether represented a market value of $2.5 trillion and employed over 1 million US workers, traveled to Capitol Hill to call for a federal carbon price. More companies, including energy companies such as Equinor and Shell are providing some climate-related disclosure as a measure to mitigate the risk. Still, actions such as this have primarily been voluntary- and disordered, “presenting a challenge for investors and others seeking to understand exposure to and management of climate risks.”

For the past few years, carbon pricing efforts have largely remained at the state level as Congress remains gridlocked on climate policy. “While there is an ongoing debate about the right price for emissions, what we do know is that inaction creates a large and growing liability,” says subcommittee chair Bob Litterman, a founding partner of the investment adviser Kepos Capital, in his foreword to the report.

How will these recommendations be taken forward? Some deem it likely that they will be shelved. Others remained hopeful that it could be a policy roadmap for the next administration now that Joe Biden is the president-elect. That said, the task force agrees that whoever comes next to the Oval Office should not make the same mistake twice. Likening climate change to the COVID-19 pandemic, which has caught the ill-prepared country off guard and thrown it into an economic crisis, Litterman writes, “time is of the essence. We do not know precisely when the planet’s climatic system will be pushed past catastrophic tipping points. But what we do know is that the cost of delay in responding to the risk can be devastating.”