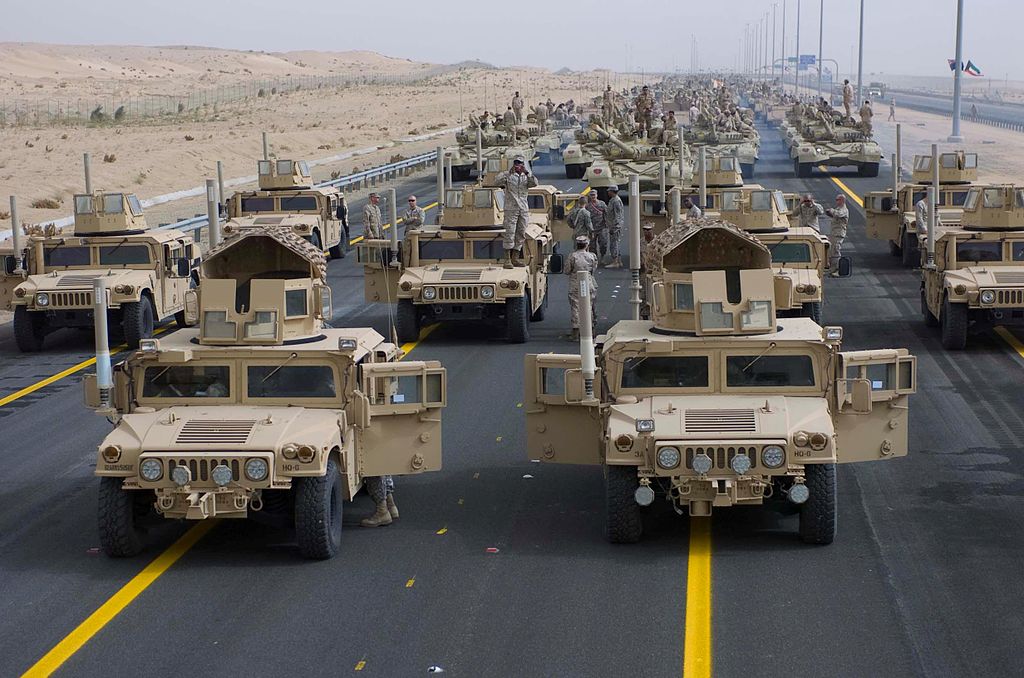 US military pollution is a significant contributor to climate change. If it were a nation state, it would be the 47th largest emitter in the world. Their negligence, nuclear testing and disregard for human life has come at a huge environmental cost, and reform needs to be taken into consideration to protect our planet.

The US military recently released a report analysing the Department of Defense’s climate risk. The Pentagon thoughtfully acknowledged that rising temperatures are “reshaping” the world with “more frequent, intense, and unpredictable extreme weather conditions caused by climate change”, but they failed to analyse the Defense Department’s own contributions to climate change.

This came as a surprise, as ample evidence has been published before the report detailing how dangerous the US military’s climate change contributions are. In 2019, a report released by Durham and Lancaster University found the US military to be “one of the largest climate polluters in history, consuming more liquid fuels and emitting more CO2e (carbon-dioxide equivalent) than most countries”. It established that if the US military were a nation state, it would be the 47th largest emitter of greenhouse gases (GHG) in the world. These figures were from taking into account the emissions from fuel usage alone.

This report did not come as a shock. The US military is a vast infrastructure and relies upon an extensive global network of trucks, cargo planes and container ships to supply its operations. These operations can range from anything – to humanitarian aid, to bombs and hydrocarbon fuels.

Gathering data about the US Armed Forces can be difficult. With their decision to withdraw from the 1997 Kyoto Protocol, the US is exempt from reporting their military emissions. However, gathering statistics from their negligent actions can be obtained through local news organisations, NGOs, lobbyists and Freedom of Information requests.

The US military is consistently contributing to enlarging the carbon footprint suffered by our planet.

In Minden, LA, the military were found to be burning explosives and munition waste several times a day with no environmental emission control measures being taken. Residents complained so the military moved the burning of these toxic substances to Colfax, LA. 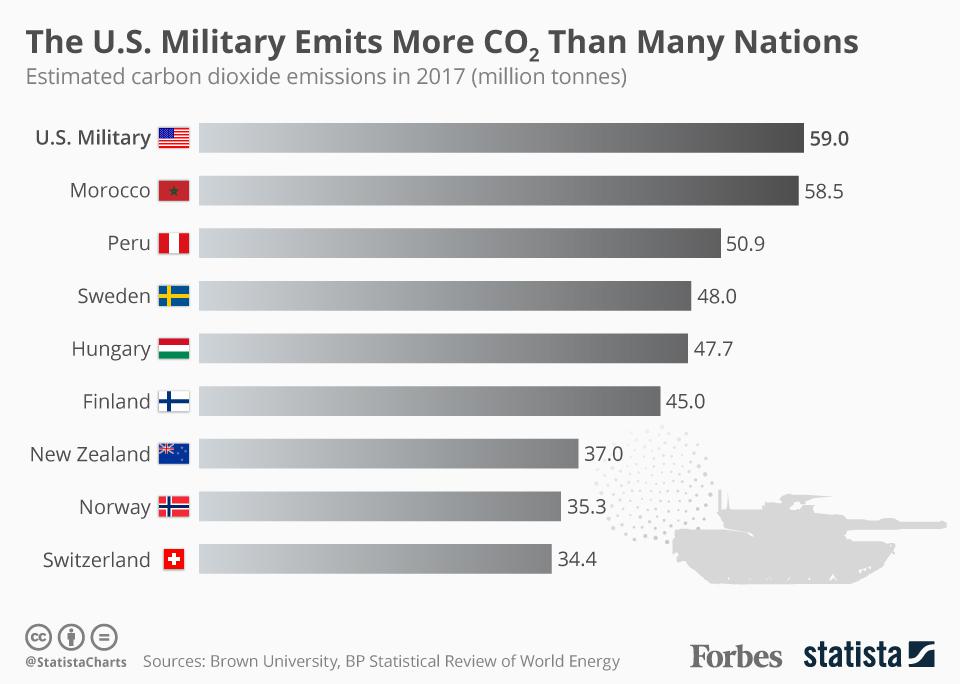 In 2017, the US Air Force bought USD$4.9billion worth of fuels, the Navy bought USD$2.8billion, the Army USD$947million and the Marines USD$36million. The US military was also found to have purchased 269,230 barrels of oil a day and emitted more than 25,000 kilotonnes of carbon dioxide.

These two examples are not exceptions. The Cost of Wars Project found that US military pollution had accounted for 1.2 billion metric tons of greenhouse gas emissions, which amount to 257 million passenger cars annually. They compared this astonishing output as higher than the emissions from whole countries like Sweden, Morocco, and Switzerland.

The report released by Durham and Lancaster University was an independent public assessment of the US military’s greenhouse gas emissions and calculated US military pollution through critical analysis of its logistical supply chains around the world. This study establishes the US military as one of the world’s largest institutional consumers of hydrocarbons.

Report co-author Dr Patrick Bigger, of Lancaster University Environment Centre, said: “The US military has long understood it is not immune from the potential consequences of climate change – recognising it as a threat multiplier that can exacerbate other threats – nor has it ignored its own contribution to the problem.”

“Yet its climate policy is fundamentally contradictory – confronting the effects of climate change while remaining the largest single institutional consumer of hydrocarbons in the world, a situation it is locked into for years to come because of its dependence on existing aircraft and warships for open-ended operations around the globe,“ Bigger added.

Co-author Dr Benjamin Neimark, Associate Director of the Pentland Centre for Sustainability in Business at Lancaster, said: “This research provides ample evidence to support recent calls by activist networks to include the US military in Congresswoman Alexandria Ocasio-Cortez’s Green New Deal and other international climate treaties.”

“Our research demonstrates that to account for the US military as a major climate actor, you must understand the logistical supply chain that makes its acquisition and consumption of hydrocarbon-based fuels possible” added co-author Dr Oliver Belcher, of Durham University’s Department of Geography.

Belcher continued: “How do we account for the most far-reaching, sophisticated supply chains, and the largest climate polluter in history? While incremental changes can amount to radical effects in the long-run, there is no shortage of evidence that the climate is at a tipping point and more is needed.”

Two of the most harrowing cases of US military pollution activity were the nuclear weapons tests they performed in the Marshall Islands and the Navajo Indian reservation.

From 1946 to 1958, the United States tested 67 nuclear weapons in what is now known as the Republic of the Marshall Islands. These weapons tests have been equated to being 1,000 times greater than the Hiroshima bomb, and the fallout from the tests had the largest impact on four northern atolls: Enewetak, Bikini, Rongelap, and Utrok, each of which were evacuated due to radiation emitted from these tests. Radiation poisoning, birth defects, leukaemia, thyroid and other cancers are just a few of the detrimental life-threatening consequences experienced by the residents of those islands more than 75 years later.

Between 1944 and 1977, Hanford Nuclear Reservation in Washington state released radioactive toxic gases and fluids, affecting the fish that provide food and economic subsistence to the residences. In addition to this, Uranium mining and aboveground nuclear-weapons tests had been occurring for approximately 50 years on and around these reservations. These actions have caused dramatic increases in cancer rates among indigenous people that reside in this region.

US military land pollution does not only take the form of nuclear testing, but it can also take the form of military real estate. Reports have indicated both domestic and foreign US military bases to rank as among some of the most polluted in the world. This is due to the astonishing amount of toxic chemicals, such as perchlorate and other components to jet fuel, that are found to contaminate drinking water, aquifers and the soil surrounding the bases.

“Almost every military site in this country is seriously contaminated,” John D. Dingell, a retired Michigan congressman and war veteran, told Newsweek in 2014. “Lejeune is one of many.”

The US military have claimed they are implementing positive changes into their policies, but these efforts have been so slight that it begs the question of whether they take these issues seriously. They have made efforts to increase renewable electric generators on the military bases in a bid to reduce their carbon footprint, although these efforts have been minimal. Additionally, the US Navy Task Force Climate Change initiative that was attempting to prepare military bases for global shifts in sea levels and warming ocean temperatures was quietly shut down.

The damage the US military has inflicted is shocking, and they have shown complete negligence and disregard of human life.

In 2017, the US Naval Air Station Oceana in Norfolk, VA was found to have spilled 84,000 gallons of jet fuel into a waterway. Similarly, in 2019, statistics arose claiming that the Air Force contractor had been dumping industrial solvent Trichloroethylene (TCE) into the ground surrounding the Tucson International Airport for 29 years. It was found that over 1,350 residents suffered from cancer and other illnesses, due to these negligent actions. Filed claims were brought against the Air Force by many South Tucsonans, who claim to continue to suffer from the damage caused by drinking the polluted water to this day.

This negligence and disregard of life is not new behaviour from the US military. From 1953-1986, Marine Corps Base Camp Lejeune in North Carolina was found to have been contaminating the groundwater with harmful chemicals that far exceeded safety standards. As a result of this negligence, a large number of servicemen contracted cancer and other illnesses.

Aside from their destructive contribution to climate change, US military wars have had a devastating effect on the economies and population of the countries they intervene in. Perhaps one of the most recent cases to their detrimental environmental record is the intervention of Iraq. The Iraqi economy is suffering tremendously as they are now forced to import more than 80% of their food, due to the desertification of 90% of Iraqi territory. Furthermore, US policies are negligent and disregard the safety of their servicemen as well as the Iraqi population. Open-air burn pits used to dispose of waste in the 2003 invasion has caused those exposed to suffer from cancer, and the depleted uranium left over from the Gulf War still causes a big environmental burden.

The irony is that a great deal of US interventions occur as American corporations wish to protect their access to oil and other fossil fuels. We see this dependence on oil as one of the driving factors of why there is such a heavy US military presence in many parts of the Middle East.

These interventions not only come with a high cost to life, but to the environment too. The Cost of Wars Project found the total emissions from war-related activity in Iraq, Afghanistan, Pakistan, and Syria to be estimated at more than 400 million metric tonnes of carbon dioxide alone.

A refugee crisis following a war is inevitable, and this is another dangerous result from American interventions. Surges of migrants from the Middle East, North Africa, and Central America have been attempting to flee to Europe and the US, and unfortunately, the response from both Europe and the US has been to tighten their borders and to increase their military activity. Furthermore, refugees and internally displaced people are “on the frontlines” of the climate emergency, and are the most vulnerable people who are likely to be disproportionately affected, as reported by the UN Refugee Agency (UNHRC).

As former United Nations Secretary General Ban Ki-Moon stated in 2014, “The environment has long been a silent casualty of war and armed conflict. From the contamination of land and the destruction of forest to the plunder of natural resources and the collapse of management systems, the environmental consequences of war are often widespread and devastating.”

Three possible reforms could be: