Extreme weather events related to climate change are forcing governments around the world to adapt their infrastructure systems accordingly to new pressures. For the US state of Texas, its record-low temperatures in February 2021 revealed the fragility of its water plants, creating a snowball effect of power shortages, water system breakdowns, and widespread risks to health and food security. The livelihood of rural Texan communities highly depends on outdated and poorly maintained aquifers and last year’s crisis was a wake-up call for both local and national governments to take immediate action and rethink the state’s water systems. We explore what causes water shortage in Texas and how the state is dealing with this major crisis.

In recent years, a series of extreme climate events have exposed huge flaws in Texas’ existing water system, leading to water shortages and droughts that have affected hundreds of thousands of residents. Recurring climate disruptions, coupled with a booming population and economic growth are redefining the state’s vulnerability to nature’s unpredictable behaviour as well as to the government’s capacity to adjust. We have a look at what causes water shortage in Texas and how the government is dealing with this crisis.

In February 2021, one of the most extreme winter storms seen in decades hit Texas, causing a domino effect of power failures and breakdowns in water systems, the combination of which left nearly 15 million people across the state without electricity and even clean water for days or even weeks. The problems, investigations revealed, were related to issues in the state’s water system. Record-freezing temperatures caused pipes to freeze, many of which were not designed to withstand the plunge in temperatures and drop in pressure in the system, thus resulting in many pipes bursting. Failures in water pipes can lead to the development of dangerous bacteria in the water supply – the state government subsequently issued repeated warnings to its population, strongly recommending to boil water before cooking or drinking. And even though some areas did not lose access to water, residents had no electricity due to the snow storm and were unable to heat it up.

The extreme storm that hit Texas in February 2021 was a big wake-up call for both the local and federal governments, as it exposed the fragility and vulnerability of water supply systems and infrastructures in Texas but also – although in less severe form – in other parts of the country, from Oklahoma City to Jackson, Mississippi.

How is Climate Change Affecting Water Supplies in Texas?

Texas – the second-largest US state located in the south-central part of the country – is consistently ranked among the top 10 states mostly affected by extreme weather events, such as drought, extreme heat, and wildfires.

Texas has always had an arid climate. However, things are progressively getting worse due to the climate crisis. Within the past century, most of the state has warmed at an average of almost 1.5F (0.8C) while rainfall has become more intense, causing increasingly severe storms and floods. Summers are also getting longer and hotter and, despite rainfall increases in some areas, less water is available. Indeed, warmer temperatures increase evaporation and water use by plants, making soils significantly drier over time. Overall, experts estimate that average rainfall is likely to decrease during winter, spring, and summer in the coming years. In 70 years’ time, the longest period without rain each year is likely to be at least three days longer than it is today. This will contribute to increased evaporation and subsequent reduction in water content in rivers and streams as well as insufficient water to irrigate crops or even drinkable water to satisfy the basic needs of the state’s growing population.

One of the biggest drivers of water scarcity is drought, a phenomenon in which dry conditions and lack of precipitation occur over certain areas for a period of time. While droughts are a natural occurrence, climate change and rising global temperatures have made them much more severe in the last decades, altering rainfall patterns and drying moisture in the soil at faster rates.

Texas’ economic growth is based on three, very thirsty sectors: fossil fuel production, real estate development, and agriculture. The state is the US leader in the number of farms and ranches. Cotton, corn, rice, and wheat are among the primary crops, but Texas is also big on peanuts, sunflowers, and sugarcane. According to statistics, 57% of the state’s water resources are used for agriculture. Each of the three sectors mentioned is badly impacted every time a drought occurs. Each decade since 1822, Texas has seen at least one period of severe drought. However, with climate change, these extreme events have intensified and become longer. The perfect example is the 1950s drought – gone down in history as the “drought of record”. Between 1949 and 1957, the state received up to 50% less rain than in normal times, while temperatures rose above average, leading to unprecedented drought and water shortages. This extreme dry period was a turning point in Texas history, and led to the formation of the Texas Water Development Board (TWDB), a governmental body responsible for “statewide water planning, collection and maintenance of water resource information, and administration of financial assistance programs for water supply, water quality, flood control, and agricultural water conservation projects.”.

While this seven-year drought remains to be the worst the state has experienced in the last century, it certainly will not be the last one. In the last 12 years, Texas has experienced some of its hottest and driest years on record, and going through consecutive severe droughts has brought its population and economy to their knees. This includes its most recent drought, which began in the fall of 2010 and lasted through winter 2014/2015. Texas has had a dry start to 2022 and, according to experts, nearly 84% of the state is now dealing with some level of drought, with a staggering 32% currently experiencing extreme drought conditions. 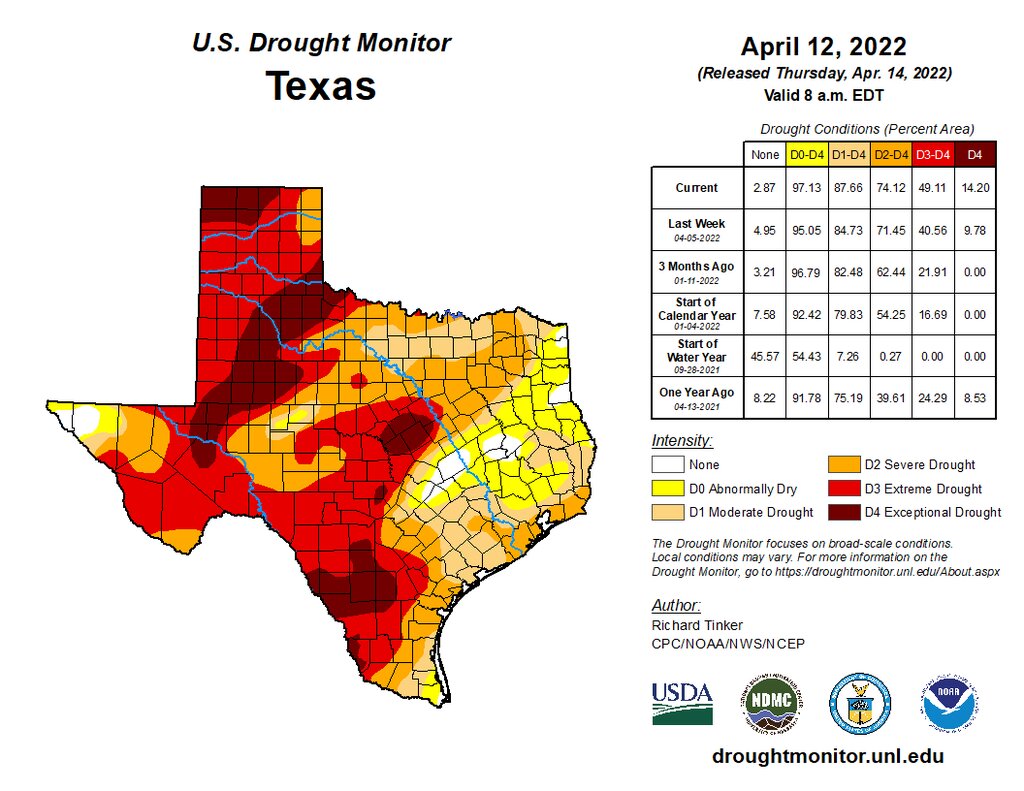 Recurrent dry periods pose a risk not only to the state’s ecosystems, endangering crops and wildlife, but they also contribute to exceptional water shortages while raising concerns over water quality and sanitation. Higher temperatures and recurring droughts are also very likely to increase the severity, frequency, and extent of wildfires. Since 1984, more than 1% of Texas’ land has burned each decade as a consequence of catastrophic wildfires, which are now threatening municipal water supplies. Indeed, toxic smokes contaminate water bodies that supply public drinking water utilities. Water exported from watersheds located in areas affected by wildfires often has greatly altered chemistry and may contain high levels of pollutants difficult to remove.

Is There Any Solution in Sight?

There is no doubt that Texas needs to secure a more resilient water supply and invest in infrastructure if it wants to avoid another crisis. The Water Development Board (TWDB) estimated that due to unprecedented population growth in the state – which is expected to reach 52 million by 2070, 22 million more people than today – demand for water will climb to 26 billion acre-feet, up from 18.4 million.

Nearly one-third of Texas’ water comes from underground aquifers. The largest single use of underground water is for irrigation. However, with the population expected to grow exponentially in the coming decades, municipal use is expected to take over, as more rural communities will depend on underground aquifers – often their only source of water – for their livelihoods. This scenario worries experts, as they expect growing demand and increasing droughts to make aquifers extremely vulnerable to overpumping. This practice can result in a series of unwanted problems, from land subsidence – the settling of ground – to the spreading of contamination and saltwater intrusion. Unlike surface water, which is controlled by the state, these aquifers are property of the owner of the land surface and thus privately managed. This highly limits the state’s power to regulate the production or use of underground water. 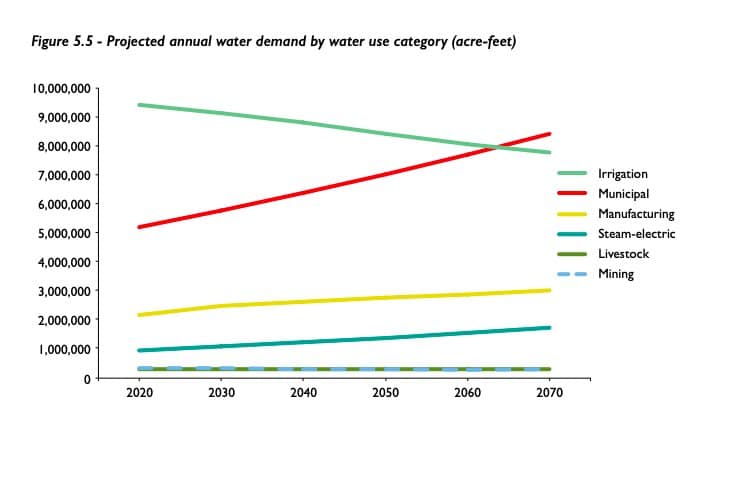 The US Government recently passed the Infrastructure Investment and Jobs Act, which will provide USD$2.9 billion to Texas for water infrastructure. Furthermore, the TWDB has recently approved USD$26 million in funds to support five groups’ water, wastewater, and flood projects. The money will be used to upgrade some of the state’s water treatment plants and water wells and make infrastructure more resilient to extreme weather events through emergency backup generators at its water treatment plants.

Even though these projects are certainly a good step in the right direction, the country is still managing underground aquifers toward depletion, pumping water at unsustainable rates. Thus, fixing its ageing plants and relying on traditional water management strategies like reservoirs and groundwater export projects will not be enough. Experts have identified several water needs, recommending water management strategies and associated projects, such as groundwater wells and new reservoirs to meet the water supply needs. These projects, however, will need to be coupled with conservation, protection initiatives, and long-term planning, which will be crucial to managing groundwater resources locally and in a much more sustainable way in the future.