Lessons Learnt from the Wildfires in Turkey 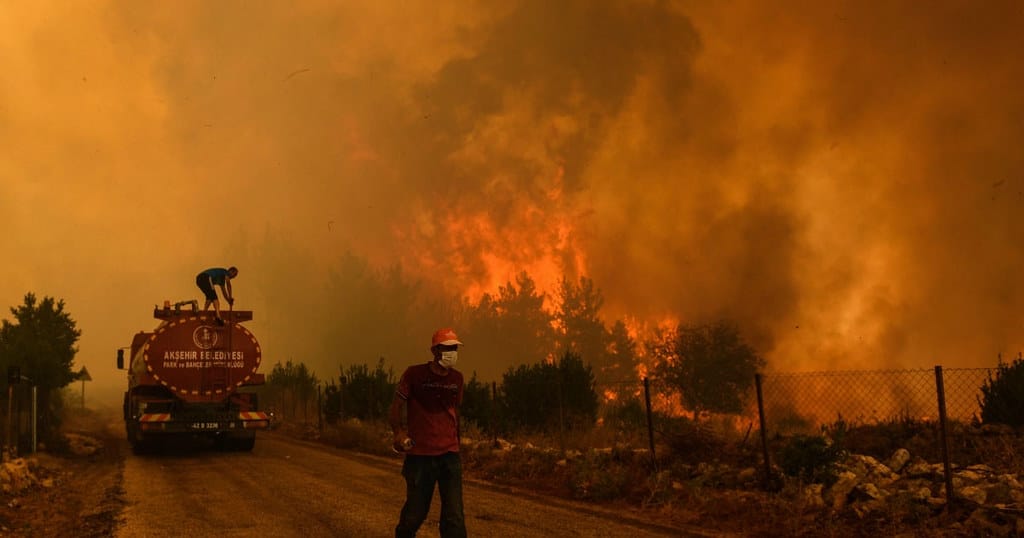 In 2021, a series of wildfires in Turkey plagued the country, causing great damage in its wake. Experts believe the event was highly correlated with the increasing trends in heatwaves. A report by the Intergovernmental Panel on Climate Change (IPCC) stated with high confidence that heatwaves have doubled in frequency since the 1980s, mostly due to human-induced global warming. As a result, Turkey is adopting new climate policies to address this increasing threat.

About 200 wildfires sparked simultaneously in the Antalya Province, located in the southern part of Turkey, on 28 July 2021, some of which lasted until August. About 1,700 square kilometres of forest were burned across the country, equivalent to about 1.7% of its total forest cover, making it one of the most severe wildfires of all time. These wildfires are often referred to as part of a larger series of wildfires that occurred during the same season in 2021. One of its neighbouring countries, Greece, also suffered from catastrophic wildfires at that time from its worst heatwave since 1987.  At one point, the country was battling against more than 75 wildfires over a two-day period, and more than 1,000 sq km of forest land on the island of Evia and in southern Greece were burned down.

The cause of the Turkish wildfires remains unclear. Albeit unlikely and without evidence, some held the conspiracy theory that the wildfires were the result of intentional arsons planned by the Kurdistan Worker’s Party (PKK), an officially designated terrorist group that fights for the independence of Kurds, based on some similar actions that they had done decades ago, while the majority of people believed that they were simply the consequences of negligence like campfires left unattended, based on the fact that at least 71% of wildfires in Turkey were indeed due to human activities, including discarding cigarettes or flammable debris. Despite all these so-called speculations, experts commonly agree that the Turkish geographical situation and the extreme heatwave that occurred during the same time were making the spread of the wildfires much worse.

Turkey is a transcontinental nation principally located in the Middle East and partly in Europe. The climate of Turkey is diverse; its northern side, which shares a border with the Black Sea, enjoys an oceanic climate with mild summers and cool winters whereas its southern part that  borders the Mediterranean Sea has a typical Mediterranean climate with hot, dry summers, as well as mild, wet winters. Summer typically starts in June, reaches its peak in July, and ends in September with temperatures in the range of 29.4C to 36.1C, during which the Antalya Province located in the south with a Mediterranean climate goes through the hottest and driest season in the region, creating the ideal conditions that allows wildfires to spread much faster and stronger.

Yet, the geographical situation only partially explains the whole picture. The Mediterranean climate can only attribute why wildfires happen more often in some months and some places but cannot provide a deeper insight into the severity of this particular series of wildfires.

Another prominent factor that must be taken into account is the widespread heatwave that has swept over southern Europe and other parts of the Mediterranean in the summer of 2021. A heatwave refers to a period when the weather is excessively hotter than usual, lasting at least two consecutive days. Last year, Turkey suffered from devastating heat and experienced its hottest day on record with temperature reaching up to 49.1C on July 20.

But the heatwave in 2021 was not a regional issue, but a global one. It was triggered by a complex and rare natural phenomenon called heat dome, which can be formed due to a difference in temperatures and pressures on land and water. As we know, surface land heats up quicker than water when exposed to sunlight. Hence, relatively warm air with lower density and lower pressure is formed on the land while relatively cool air with higher density and higher pressure is formed on the water. Since winds move from high-pressure regions to low-pressure regions, sea breezes often occur in the morning of summer. At night, since land cools down quicker than water, cooler air on the land moves towards the sea, forming land breezes. Yet, if the heat is trapped in the land, leading to a situation in which the temperature in the land is constantly higher than the water and air moves constantly from water to land, a heatwave is formed. Normally, the heat rises and leaves the land like hot air balloons. However, the heat is trapped if it rises to a certain level and makes contact with the Jet Stream, a strong cold wind that moves from west to east in the upper atmosphere, as the cold Jet Stream with high density and high pressure pushes back the heat towards the ground. Indeed, a heat dome is a natural phenomenon, but it is a consensus among scientists that climate change with rising temperature makes its emergence much more frequent and stronger because the heat can accumulate at a faster pace when the general temperature increases.

How Turkey is Tackling Wildfires

The government of Turkey had already adopted relatively effective policies on preventing wildfires prior to the catastrophe in 2021. A comprehensive study published in April 2021 shortly before the wildfire events, compared UN’s Food and Agriculture Organisation’s (FAO’s) guide Forest Fires and the Law with Turkish forestry legislation, and found out that the Turkish forestry legislation followed the FAO’s guide with an accuracy of 78.1%.

According to the study, the Turkish Forest Administration has a strong infrastructure to carry out the planning, monitoring, and evaluation needed to prevent wildfires, and a well-installed early warning system exists to detect and suppress the wildfires. There is a gap however, and it lies in the lack of regulations for preventing man-made fires and the lack of focus on public participation. There is a major flaw in the country’s forestry legislation; it only focuses on policies preventing the spread of wildfires without trying to tackle the root cause. As stated previously, humans are responsible for at least 71% of fires in Turkey. By improving public awareness, education and participation, the country can drastically reduce man-made tinder.

Public awareness is of utmost importance, especially during climate change when heatwaves are becoming more frequent and stronger, fuelling the severity and spread of wildfires. Forests are our precious resources that create habitats for millions of species, serve as a carbon sink to decelerate the process of climate change, purify the air, and even provide wood for our furniture. One negligence is burning down forests across the globe – on top of deforestation activities.

In addition, the Turkish government’s effort into mitigating climate change also affects the efficiency of its policies to prevent wildfires in an indirect way; greenhouse gas emissions can drastically raise the temperature within the region, fuelling the conditions of wildfires. According to the Climate Action Tracker, an independent scientific analysis, Turkey is still critically insufficient when it comes to tackling the climate crisis. It is estimated that global warming would exceed 4C if all countries follow Turkey’s approach.

That being said, the country has promised to ramp up climate action. In October 2021, the Turkish parliament finally ratified the Paris Agreement that aims to limit global warming to at least 2C, some five years after its introduction. This change of heart may be due to the prior series of wildfires attracting the attention of politicians on climate change, or simply political posturing made by the Turkish government ahead of the UN Climate Change Conference (COP26) held later in the same month.

Nevertheless, the officials stated that they planned to reduce greenhouse gas emissions to 21% below expected levels by 2030 and reach net-zero emissions by 2053. In February 2022, Turkey had its first Climate Council, a large advisory meeting that invited a large group of experts, representatives of sectoral organisations, businesses, and environmental non-governmental organisations to share their opinions on the method to achieve net-zero emissions by around mid-century. After the council, 217 articles were adopted and sent to the president of Turkey, Recep Tayyip Erdoğan, as policy recommendations. These will then be officially declared upon the president’s approval. Acknowledging the fact that wildfires accelerate climate change by damaging carbon sink, the articles also include ideas that help to prevent wildfires, such as land consolidation, a rearrangement of fragmented lands and their ownerships that aim to form larger landholdings, so that potential wildfires will be limited in certain areas, making detection and prevention easier to be carried. Though not perfect and certainly contain loopholes, these recommendations are the greatest attempts in Turkish history to tackle climate change and they shall serve as the cornerstones of the country’s climate policies.