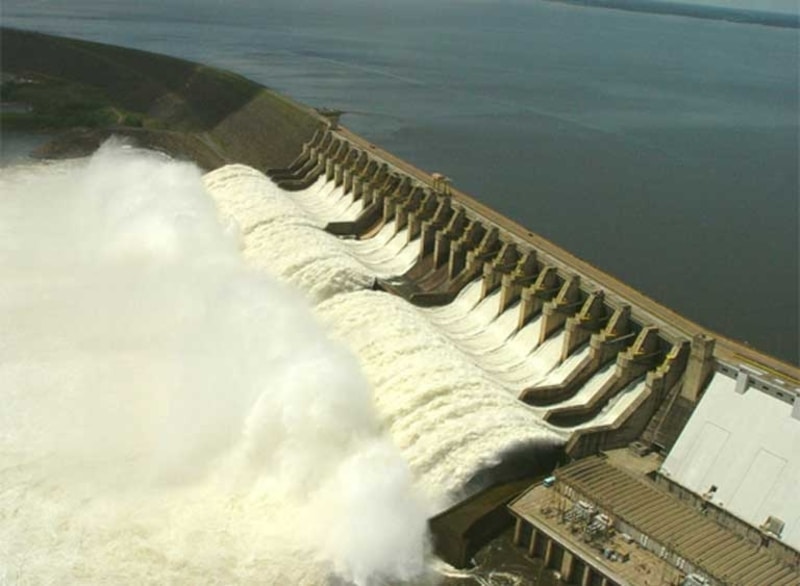 Hundreds of dams are planned within global protected areas, a prospect that threatens people, plants and animals that rely on the lifegiving waters of free-flowing rivers.

According to a first-of-its-kind global analysis published in the journal Conservation Letters, 509 dams, or 14% of the total currently under construction or planned for the next two decades, are set to be built in protected areas.

“The sheer number of dams that are planned within protected areas is alarming,” said Michele Thieme, lead author of the study and lead freshwater scientist at WWF. “Rivers are the lifeblood of ecosystems. Any policy that aims to conserve nature must prioritize the free flow of rivers.”

The researchers overlaid data on planned dams from the Global Dam Watch database onto maps from the World Database on Protected Areas to arrive at the number. The team also identified 1,249 large dams already in place within existing protected areas using the Global Reservoir and Dam Database (GRanD). 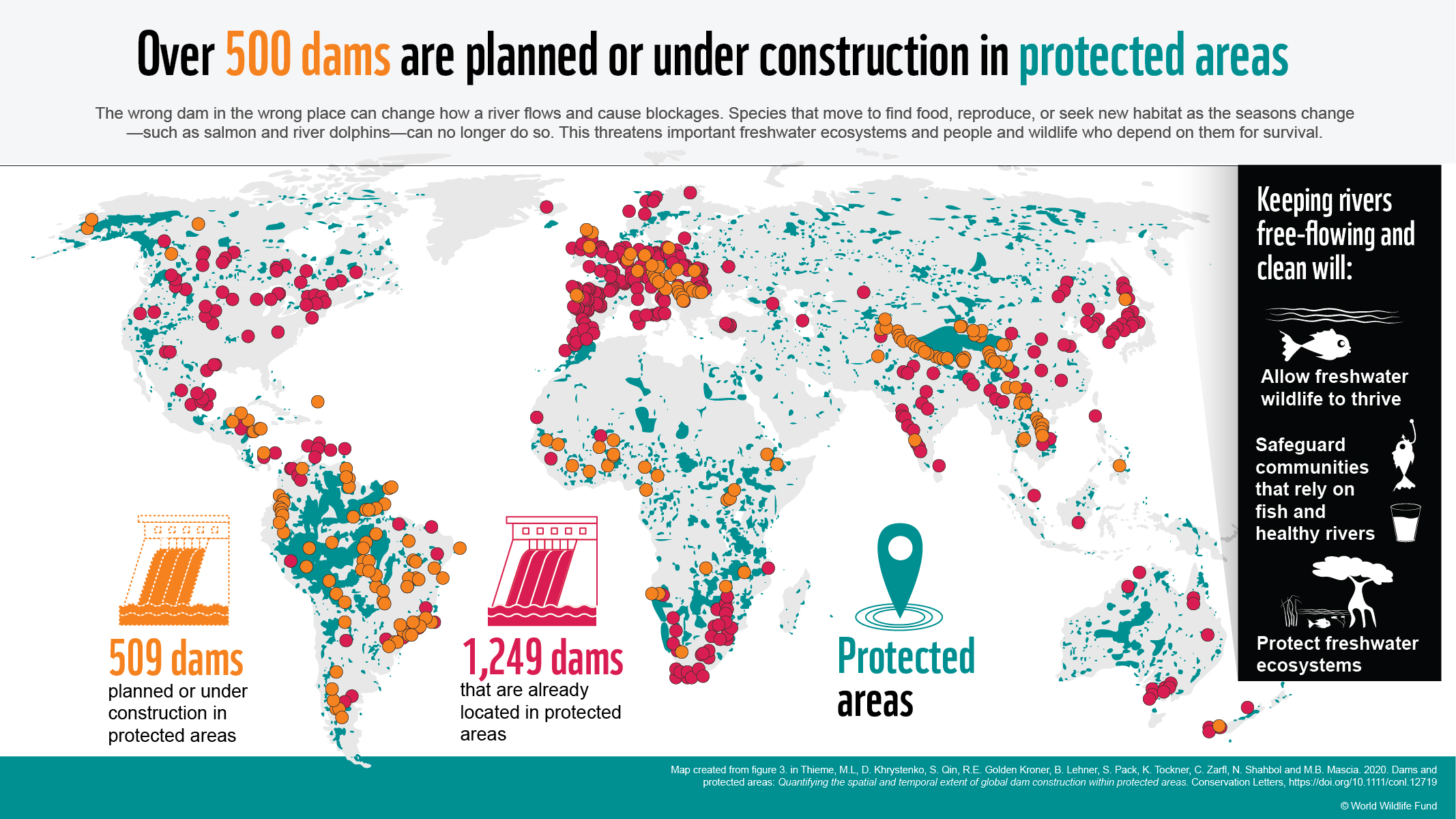 Worldwide, rivers aren’t what they used to be. A 2019 study revealed that two-thirds of the world’s longest rivers are no longer free-flowing. These long rivers (more than 1,000 kilometers or 621 miles long) are blocked by dams and infrastructure. This fragmentation blocks the flow of water and nutrient-carrying sediments to downstream habitats, altering ecosystems and impeding the migration and reproduction of fish and other freshwater species.

Freshwater mammal, bird, fish, reptile and amphibian populations have declined by 83% between 1970 and 2014. Migratory freshwater fish have declined by 76%. Dams and infrastructure are among the major causes of this decline.

The construction of dams can have dire consequences for local communities, and the true socio-environmental costs of dams are rarely evaluated beforehand. According to the World Commission on Dams, large dams have forced some 40-80 million people from their lands in the past sixty years.

The Belo Monte dam complex in the Brazilian Amazon displaced roughly 20,000 people, according to estimates by International Rivers. After the installation of the Tucuruí dam, also in Brazil, fish catch declined by 60%, while 100,000 downstream residents were impacted due to lost fisheries, flooded agricultural lands, or the loss of other resources. On the Lower Omo River in Ethiopia, the construction of a dam led to the displacement and loss of livelihoods for Indigenous groups. And the list continues.

The controversial Kaliwa dam project in the Philippines is one of the projects identified as “under construction” by the study. The construction threatens the ancestral domains of Indigenous groups as well as a designated natural wildlife park sanctuary and game refuge. And it may contaminate drinking water, endanger endemic species, and pose flooding risks to agriculture and fishing communities.

In Croatia and Slovenia, several planned dams along the Mura and Drava rivers trespass into protected areas. The dams are intended to provide electricity and flood protection to the region, but would also bring with them a suite of problems, including habitat loss for fish, erosion of the riverbed, changes to the river flow, and impacts to local fishing and recreation, according to WWF.

“The study’s findings are alarming but also ring true with our experience, where we have seen a dramatic increase in dams being built in extremely sensitive areas,” Josh Klemm, policy director of International Rivers, who was not involved in the study, told Mongabay in an email.

“For example, the China Ex-Im Bank is expected to finance the Koukoutamba Dam in Guinea, which would result in the deaths of up to 1,500 critically endangered western chimpanzees. The dam would be built in the middle of a national park that was just created in 2017 specifically to protect the chimpanzees.”

To avoid such catastrophes, the authors strongly encourage governments to avoid constructing dams in or near protected areas or where they disrupt free-flowing rivers. Thieme points to planned dams in the Balkans Adria region and across the arc of the Eastern Himalayas in Southeast Asia (orange dots on the WWF map above) that overlap with areas that still have relatively high river connectivity.

Where dams already exist and provide valuable services, the authors recommend that dams be mitigated to include fish passages and to restore environmental flow regimes.

“We’re not an anti-dam organization,” Thieme said, “But we very much advocate for early upstream planning in ways that can minimize impacts and harm.”

Governments should first look for other forms of alternative energy like solar and wind power, which are becoming more cost-effective. But if a dam must be built, informed site selection is the most important and effective step towards building low-impact dams that, some say, can be done.

“The existence of protected areas has been insufficient to prevent the construction of destructive dams,” Klemm said. “That is a key reason that we and our partners advocate for and are actively seeking permanent legal protection of rivers enshrined in national legislation.”

The creation of the Hetch Hetchy dam inside the hallowed Yosemite National Park was the result of regulation rollbacks by the US government and is the earliest PADDD event noted in the study.

Most of the PADDD events identified in the study occurred in Brazil. In 2010, for instance, 10 protected areas were dissolved and four were downgraded to make way for the Jirau hydroelectric plant. The plant dammed the Madeira River, one of the Amazon’s largest tributaries, altering river flow, displacing Indigenous groups and impacting the health of important fisheries.

The prospect of building more dams raises alarms about the management of these protected areas. The researchers express concerns about ongoing rollbacks of protections, especially amid the COVID-19 pandemic.

“It’s too early to tell overall if rollbacks have increased during the pandemic,” Rachel Golden Kroner, a co-author of the study and social scientist at the Betty and Gordon Moore Center for Science, told Mongabay in an email. “However, we do know that these decisions are moving forward at a time when the public is understandably distracted, and cannot adequately participate in decision-making processes.”

On the other hand, the pandemic creates opportunities for increased regulations and protections. Governments should use economic recovery plans to support conservation, protect land, and invest in programs such as payments for ecosystem services, Golden Kroner says.

“The pandemic has halted construction at dam sites around the world, and many disrupted projects are unlikely to ever get built,” Klemm said.

“The hydropower sector is already on the ropes after years of decline because of ballooning costs and cheaper alternatives, and the post-COVID recovery represents a real opportunity to make a clean break from the past.”