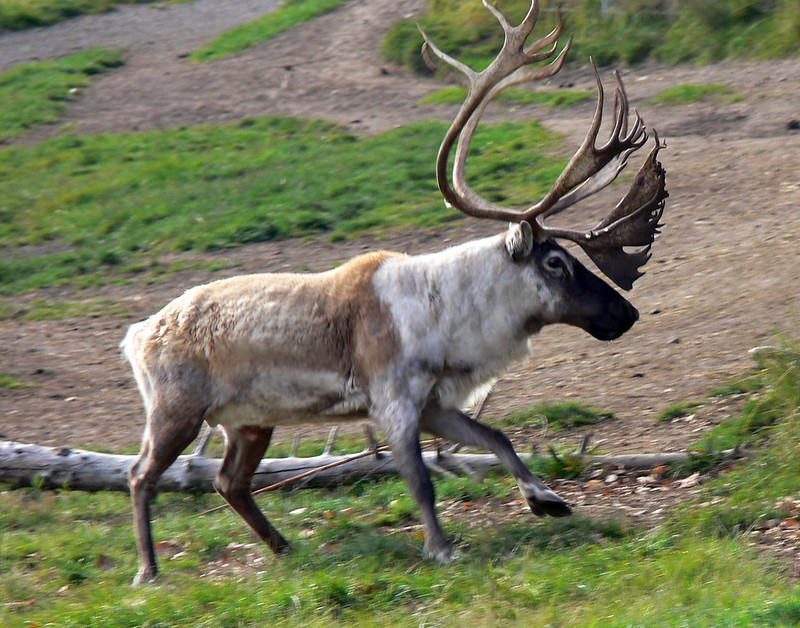 Catching a caribou isn’t easy. In some locations, it involves flying around in helicopters, shooting the animal with a tranquilliser dart, making it safely to the ground, and placing a radio collar on the animal before it wakes up. This process is a necessary evil however, as researchers endeavour to find out how changing conditions in the Arctic is altering animal migrations.

In other areas, the process is “easier.” Where caribou, also known as reindeer (Rangifer tarandus) cross rivers in western Alaska, “you can just basically pull up on the boat from two sides, grab the antlers and then put the collar around [the caribou] without tranquillising them,” Elie Gurarie, an associate research scientist at the University of Maryland, told Mongabay.

Collaring animals “is an intensive thing to put an animal though,” Gurarie said. Which is why, “it puts all the more onus on us to learn as much as we possibly can from these tracking data.”

Something researchers are hoping to learn is how rapidly changing conditions in the Arctic are affecting the animals there. But these types of big-picture questions require big-picture data, which can be hard to come by in the Arctic. Not only do they have to track these formidable animals in one of the world’s most remote areas, but existing data on the same species may have been collected by different agencies, in different locations, across time, with no easy way to connect the dots.

Now, a global archive of animal movement is making it easier to make those connections. The newly launched Arctic Animal Movement Archive (AAMA), includes 28 years of terrestrial and marine animal tracking studies on more than 96 animal species across the Arctic, Arctic marine, and subarctic (including boreal forests and taiga).

More than a hundred universities, conservation groups, and government agencies from 17 countries contributed to the archive, including national, regional and First Nations governments. The archive is hosted by the Max Planck Institute’s Movebank platform and funded by NASA.

Researchers conducted their first case studies using the AAMA, and found large-scale patterns in the way caribou, moose (or elk), wolves, golden eagles, and bears are responding to climate change. These findings, published in the journal Science, demonstrate how the archive can be used to illuminate changes at the ecosystem level.

“I would say this is an early example of what we might call global animal movement ecology. We’re increasing our ability to monitor the pulse of animal populations across the Earth and ask big picture questions about what it means.” Gurarie, a co-author of the paper, said in a statement.

This broad view is important, Gurarie told Mongabay, “because climate change is happening on a large scale, on a global scale and often over a decadal scale.”

“The Arctic is undergoing some of the most rapid climate change on the planet — upward of double the rates we are seeing here in Montana,” Mark Hebblewhite, a professor at the University of Maryland and co-author of the paper, said in a statement. The results are the loss of ice, warmer winters and earlier spring snowmelt, affecting animal movement.

“If you have a very snowy winter and then a warm spring, the snow becomes very heavy, slushy,” Gurarie said. “I don’t know if you’ve done any cross-country skiing, but the worst, most difficult snow to travel in is heavy, wet snow … and that’s as true for a skier as it is for a caribou.”

In their analyses, researchers found that the northernmost herds of caribou have begun giving birth earlier in the spring. This shift in the birthing times, gleaned from 17 years of caribou tracking data from more than 900 female caribou, is mysterious, Gurarie says, because caribou were not believed to have much flexibility in birthing times. It’s also troubling.

Not all caribou migrate, but those that do travel hundreds of miles to gather in very specific locations to give birth and nurse their young calves. The journey is long and arduous, and if poor conditions prevent the mother caribou from make it to the calving grounds, “usually that’s tougher for the females and it’s tougher for the calves,” Gurarie said.

“Caribou are the Arctic’s dominant large herbivore — an iconic symbol and crucial to Indigenous peoples for their food security and culture,” Hebblewhite said. “Yet they are declining across the Arctic, and an obvious question is the role of climate change.”

The data could not have been collected without the knowledge and participation of Indigenous peoples and First Nations groups, Gurarie said. Many of the Indigenous researchers “have a sense for which herd animals belong to just by physical appearances in a way that we [non-Indigenous researchers] don’t have access to.” They’re also deeply invested in the work as “caribou are the most directly meaningful for their material culture.”

The researchers also analysed 21 years of movement data for black bears, grizzly bears, caribou, moose and wolves to see how they are responding to changes in seasonal temperatures and winter snow conditions. It turns out, each group is responding differently, which could have consequences for predator-prey interactions, competition, and foraging success.

“Movement is central to animal survival in the harsh Arctic environment. Yet movement is costly, especially in the stark Arctic landscapes,” Hebblewhite said. “Our work showed that increasing temperatures, especially in summer, were affecting movement rates of these large mammals, which could have energetic costs that stress these species. And changes in snow in the winter were also influencing wildlife movements — also in ways that could have population impacts.”

An analysis of movement data from more than 100 golden eagles (Aquila chrysaetos) migrating north revealed a difference in arrival times at breeding grounds over a 24-year period. After mild winters, immature birds arrived earlier in the spring to breeding grounds than adult birds. Such changes may impact their breeding success, and present “age-specific challenges during migration and at their warming Arctic summering grounds,” the paper states.

With this new movement data, scientists will be better able to identify animals’ migratory corridors. That could help decision-makers to set aside conservation areas or decide the fate of roads or extractive industries that may come close to these animal migratory highways.

“We hope our collective work shows that the changes underway in the Arctic are real and strong and affecting almost all Arctic wildlife species,” Hebblewhite said, “as well as the ecosystems and people who depend on them.”