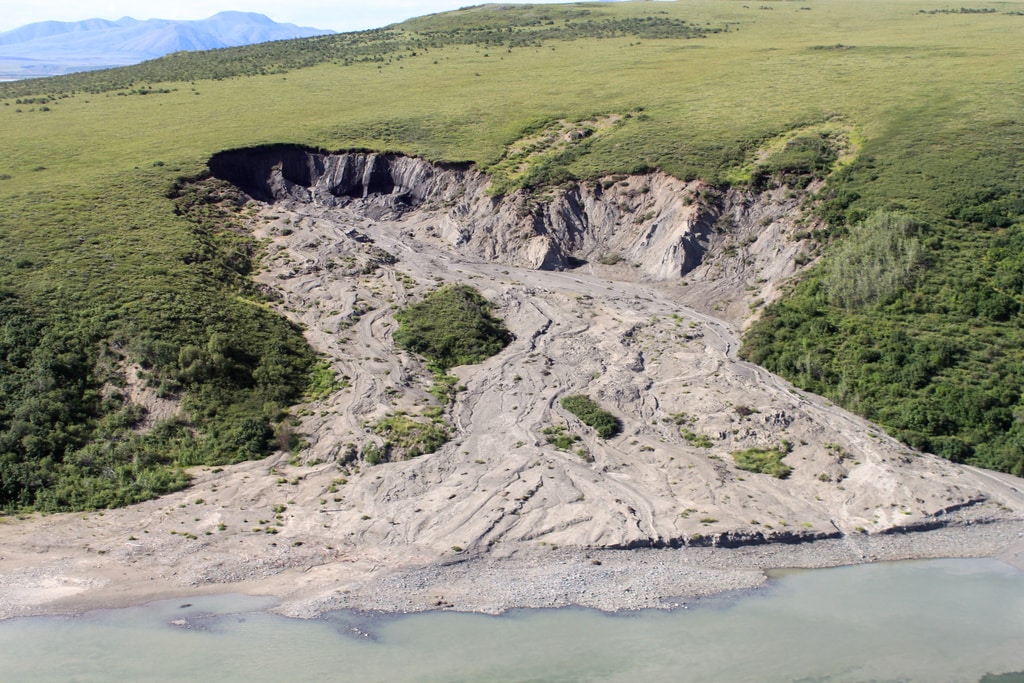 The cracked, buckling road between Fairbanks and Fox, Alaska, wends its way past snowy forests where slender birches and black spruce trees protrude out of the ground at impossible angles, slanting and swaying as if the very earth were alive. Scientists call these ‘drunken forests’. The ground here consists of permafrost — soil, sediment, rock and ice that often remains at or below 0 degrees Celsius year-round. Permafrost covers approximately 22.8 million square kilometres in the Arctic, sub-Arctic and alpine regions — comprising nearly a quarter of the exposed land surface in the northern hemisphere.

In Alaska, 85% of the state lies within the permafrost zone, though discontinuous permafrost — areas with patchy permafrost presence — underlies much of the Fairbanks area. In Arctic regions, permafrost temperatures often dip down to -8 degrees C. But in Fairbanks, which lies roughly 321 kilometres south of the Arctic Circle, temperatures hover much closer to the freezing point, causing the permafrost to sporadically thaw out. This freeze-thaw action has long posed challenges for natural and human systems, intoxicating forests, breaking pavement, sinking houses, and even sometimes draining lakes sitting atop it.

But as climate change heats up the planet, with the Arctic warming at twice the rate of the rest of the globe, things are about to get a whole lot worse.

Why is permafrost melting bad?

Scientists began seriously worrying about climate change impacts on permafrost about 15 years ago, but not only because of degraded infrastructure. The world’s permafrost serves as a massive carbon reservoir, storing nearly twice the amount of carbon currently found in the atmosphere. An estimated 1 400 gigatons of carbon — made up of decomposed plants and animals which once inhabited the Earth — can be found embedded in permafrost.

By comparison, our atmosphere presently contains just 850 gigatons of carbon. As the planet warms and permafrost thaws, some of that locked-up carbon will be released into the atmosphere. The trillion-dollar question is how much and how fast?

In 2011, Merritt Turetsky, the director of the Institute of Arctic and Alpine Research at the University of Colorado Boulder, helped found the Permafrost Carbon Network, connecting scientists studying permafrost across the globe, from Alaska to Canada to Siberia. Before that, much of the research on changes in the Arctic had centered on declining sea ice extent — not on land impacts.

“There wasn’t a lot of info out there. We had initial estimates of permafrost carbon loss that were based on back-of-envelope calculations,” says Turetsky.”

But those rough estimates were massive: “They showed that permafrost carbon release over a short order of time could be really disruptive and carried a lot of risk.” By connecting scientists and synthesising collected data, the network hoped to figure out how much carbon loss the world should expect.

Nearly a decade later, scientists have a much better handle on when, where and how thawing permafrost could impact the planet. “I think the scientific understanding is maturing and we’re seeing the evidence of that,” says Turetsky.

That’s crucial because the United Nation’s Intergovernmental Panel on Climate Change (IPCC) only recently started including permafrost thaw into its long-term projections. If we intend to limit warming to 2 degrees C, as stipulated in the 2015 Paris Climate Agreement, we’ll need to cut emissions even sooner than IPCC models currently predict to account for the carbon released by thawing permafrost.

Until recently, scientists assumed global permafrost wouldn’t lose more than 10% of its carbon, and that this would occur over a drawn-out timescale. But when they pooled observations from more than 100 Arctic field sites in the Permafrost Carbon Network, they found that the permafrost likely released an average of 1.662 trillion kilograms (1.832 billion tons)  of carbon each winter from 2003 to 2017 — double that of past estimates. On Alaska’s North Slope, permafrost temperatures have increased by 11 degrees F in just 30 years. In turn, the amount of CO2 released from the region in early winter has increased by 73% since 1975.

In a 2015 study, scientists found that for every one degree C rise in Earth’s average temperature, permafrost may release the equivalent of 4 to 6 years-worth of oil, coal and natural gas emissions. If fossil fuel use isn’t restrained, they said, permafrost could soon be as big a source of greenhouse gas emissions as China, the world’s second largest economic powerhouse.

The Risk of Abrupt Thaw

Though the IPCC is considering carbon emissions due to gradual permafrost thaw in its Sixth Assessment Report, due out in 2022, it won’t take abrupt thaw and subsequent greenhouse gas release into consideration.

Abrupt thaw, the large-scale surface subsidence of land, occurs in zones rich with subsurface ice and manifests as thermokarst, thaw slumps producing gullies, scar wetlands and thermokarst lakes. As temperatures rise, ice wedges or lenses can melt rapidly, destabilising soil and sediment above in a way akin to suddenly removing a support beam in a house, resulting in structural collapse.

Unlike gradual thaw which affects mere centimetres of permafrost and occurs over the time scale of decades, abrupt thaw can impact meters of permafrost in just months or years. This can shock the surrounding landscape into releasing even more carbon than if it had thawed at a leisurely pace.

In a paper published in February in Nature Geoscience, Turetsky and her co-authors found that, while abrupt thaw will likely occur in less than 20% of the world’s permafrost zone, it could affect half of all permafrost carbon through rapid erosion, collapsing ground and landslides. Despite influencing only a small portion of the Arctic, abrupt thaw emissions could have the same climate feedback effect as gradual thaw emissions would over the entire permafrost zone.

These abrupt releases could trigger a positive feedback loop whereby the permafrost’s greenhouse gas emissions would further warm the atmosphere, which would then thaw more permafrost and release more carbon. Turetsky says that without accounting for abrupt thaws, we’re underestimating the impact of permafrost carbon releases by 50 percent.

“The climate consequences are as high as gradual thaw because abrupt thaw is releasing a lot more of its carbon as methane,” Turetsky explains.

Though permafrost serves as a carbon sink, when that carbon is released into the atmosphere it can come out as either carbon dioxide (C02) or methane (CH4), depending on whether the carbon stores were subject to aerobic or anaerobic respiration. The danger here: methane is far more potent as a greenhouse gas than CO2, trapping up to 30 times more atmospheric solar radiation.

“If you look at just the magnitude of carbon, abrupt thaw only releases about 40 percent of the carbon relative to gradual thaw. But that carbon comes out as a lot of methane and it has bigger climate consequences,” Turetsky says.

“It’s both worrisome and reassuring at the exact time,” she adds. “What we now know is that abrupt thaw doesn’t affect a huge area of the Arctic” — that’s the good news — “but it does carry a punch. It affects the deepest and most carbon rich soils which are found in areas prone to abrupt thaw.”

In their 2019 paper, “The Polar Regions in a 2 Degree C Warmer World,” the authors lay out several emission scenarios that span releases between a modest increase of 10 teragrams of extra methane per year, to more than 50 teragrams through 2080 assuming a 2 degrees C increase in global temperature.

“Although increases in methane emissions in excess of 50 Tg represent extreme scenarios, these projections do not consider possible abrupt changes or accelerating trends. Given the potential for decomposition of large stocks of organic soil carbon, such changes could be an important factor in the future,” the authors write.

Over the next decade, researchers will be trying to model the potential methane releases from Arctic permafrost more precisely — those estimates will help policymakers determine just how short a time we have in which to act before our climate crisis morphs into a climate catastrophe.

The news isn’t all bleak: another study published in Science Advances in February used paleoclimate research to argue that though permafrost does have the potential to emit large quantities of methane, it’s “unlikely the gas released from those stores will reach the atmosphere.” Using ice cores from Antarctica, scientists examined air composition dating back 8 000 to 15 000 years, Earth’s last major deglaciation period. They found that methane emissions from ancient carbon reservoirs were small during this time, meaning the likelihood of old carbon reservoirs in the Arctic destabilising and emitting large amounts of methane in the present day is pretty low.

But that doesn’t mean things are anywhere close to stable up North.

Since the late 19th Century, the Earth as a whole has warmed by about 0.8 degrees C. But the Arctic has warmed 2 to 3 degrees C. And scientists expect the region to warm an additional 2 degrees C above the 1981-2005 baseline over the next 25 to 50 years, if fossil fuel emissions aren’t curbed. That could cause big problems, not just in the Arctic summer, but in the dead of winter as well.

Scientists have long known that Arctic temperatures have been accelerating carbon emissions in winter time, but they were unsure of the exact winter carbon balance. Come spring and summer, the world’s permafrost continues to act as a carbon reservoir, locking up decaying organic material.  But these new results “indicate that winter CO2 loss may already be offsetting growing season carbon uptake,” says Sue Natali, director of the Arctic Program at Woods Hole Research Center and a member of the Permafrost Carbon Network.

Natali and her team synthesised field observations of CO2 emissions to estimate that the permafrost region is losing 1.7 million metric tons of carbon during the winter season that runs from October through April. By comparison, this landscape only takes up around 1 million metric tons per year. As the Arctic warms, permafrost CO2 release could increase by another 17% under a moderate global emissions reductions scenario, and would increase by 41% under a business-as-usual emissions scenario.

“The Arctic has been a [carbon] sink for a very, very long time,” says Natali. But, “we’re now changing how this system is functioning.” Researchers have long suspected that the Arctic could one day switch over to become a carbon source; Natali stresses that her team’s findings indicate this is already happening. “The ambition to stay below 2 degrees C of warming needs to be ramped up. And it needs to be ramped up sooner than later,” she says.