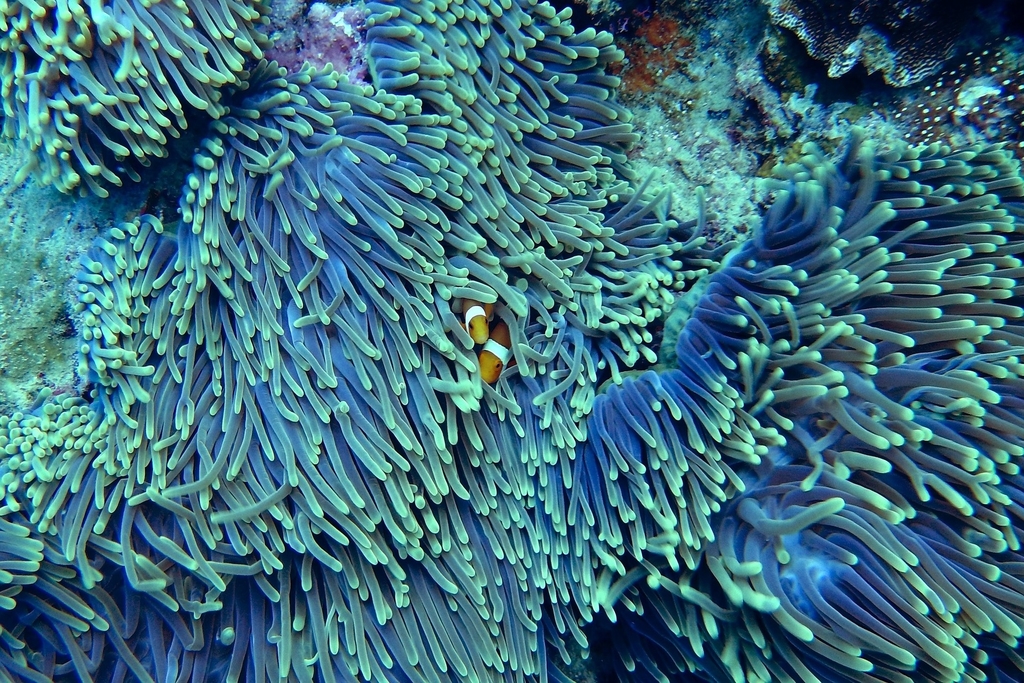 Artificial corals provide structural support that could stimulate the recovery of endangered reefs.

The global scale of coral bleaching has tripled since 40 years ago– severe bleaching currently occurs in over 30% of coral reefs globally compared to less than 10% in the 1980s.

The climate crisis is the leading cause of bleaching events. As the crisis warms the Earth’s oceans, underwater heat waves become more intense and prolonged, placing immense stress on corals.

When exposed to extended periods of heat, corals begin to expel the plant cells (Zooxanthellae algae) living in their tissues. Healthy corals form a mutualistic partnership with algae, whereby corals provide shelter and nutrients for the algae while the algae produce sugars and lipids that the coral feed on. Sustained heat stress causes algae to release oxygen-free radicals which damages the coral, forcing it to expel the algae and eventually starve to death.

To date, half of the Great Barrier Reef has been bleached since the massive El Niño heat wave in 2016, with little hope of recovery. The reef could also be about to experience its most widespread outbreak of mass coral bleaching ever, according to the US government’s National Oceanic and Atmospheric Administration. Many coral systems around the world face a similar fate.

Why are artificial reefs important?

To keep up with this widespread bleaching, conservationists engage in a variety of strategies to improve the resilience of coral reefs. The use of artificial structures in particular has proved to be successful in supporting coral growth.

Researchers from the Mote Marine Laboratory and Aquarium in Florida set up coral nurseries to restore damaged reefs in 2018.

The researchers first grow corals in artificial ocean-based nurseries. These comprise tree-like structures made from fishing lines attached with plastic branches. The structures hang from a buoy, and individual corals are planted on each branch.

The corals are incubated to grow to the size of a basketball before they are harvested from the nursery to be planted on the seafloor. Eventually, the newly planted corals will fuse with the larger corals and the reef begins to recover within a year.

Corals that take a longer time to grow, such as mound and boulder corals, require more effort. These corals are cut into tiny pieces and then planted on round ceramic tiles forming a flower-like structure. The corals grow up to 50 times faster via this process. The ceramic tiles are later implanted into dead corals.

“It’s a way to jump-start the reef,” says Dr Emily Hall, an ecologist at Mote Marine Laboratory. The laboratory plants thousands of these coral-flowers every year, which typically achieves more than an 80% survival rate.

The team has planted almost 70 000 pieces of corals in the Caribbean Sea in hopes of increasing the coral population to a point where they can reproduce on their own.

Artificial corals can also be implanted onto existing coral reefs to bolster their recovery. Researchers from the University of Delaware showed that 3D printed coral models could provide structural support for the restoration of damaged reef systems following a bleaching event.

The artificial coral structures act as a foundation for coral larvae to settle and grow. They also provide shelter for reef-associated fish and invertebrates, which are crucial for the development of a healthy reef ecosystem, since these fish feed on invasive algae that compete with corals for light and space.

“Offering 3D-printed habitats is a way to provide reef organisms a structural ‘starter kit’ that can become part of the landscape as fish and coral build their homes around the artificial coral,” says Professor Danielle Dixson, a researcher at the University of Delaware.

“And since the materials we selected are biodegradable, the artificial coral naturally degrades over time as the live coral overgrows it,” she adds.

Conservationists in Australia use similar 3D structures to restore coral reefs in the Pacific Ocean. Reef Design Lab, an industrial design studio based in Melbourne, developed a Modular Artificial Reef Structure (MARS) made of ceramic, which can be moulded into complex shapes that fit snugly like Lego blocks within existing coral reefs.

The MARS system was installed in the Maldives in 2018 as part of the island’s coral farming project. According to Aminath Shauna, spokesperson for the project, “MARS is based on corals that are most widely growing in the Maldives…the 3D-printed reefs have all these contours and shapes that mimic the natural reefs, so that corals can easily attach themselves, which we can’t do by just building regular concrete structures.”

Although artificial corals could offer bleached coral reefs a second chance, it is not a long-term solution to global widespread bleaching. Even under the best conditions, extensively damaged reefs take at least 10 years to recuperate and even then, some reefs never fully recover after a severe bleaching event.

The key to saving coral reefs is to mitigate the climate crisis through major reductions in global greenhouse gas emissions. Researchers remain optimistic that bleached coral reef systems such as the Great Barrier Reef could recover with conservation efforts coupled with a global drop in carbon emissions.

This is Part Two of “Improving the Resilience of Coral Reefs.” Read Part One here.