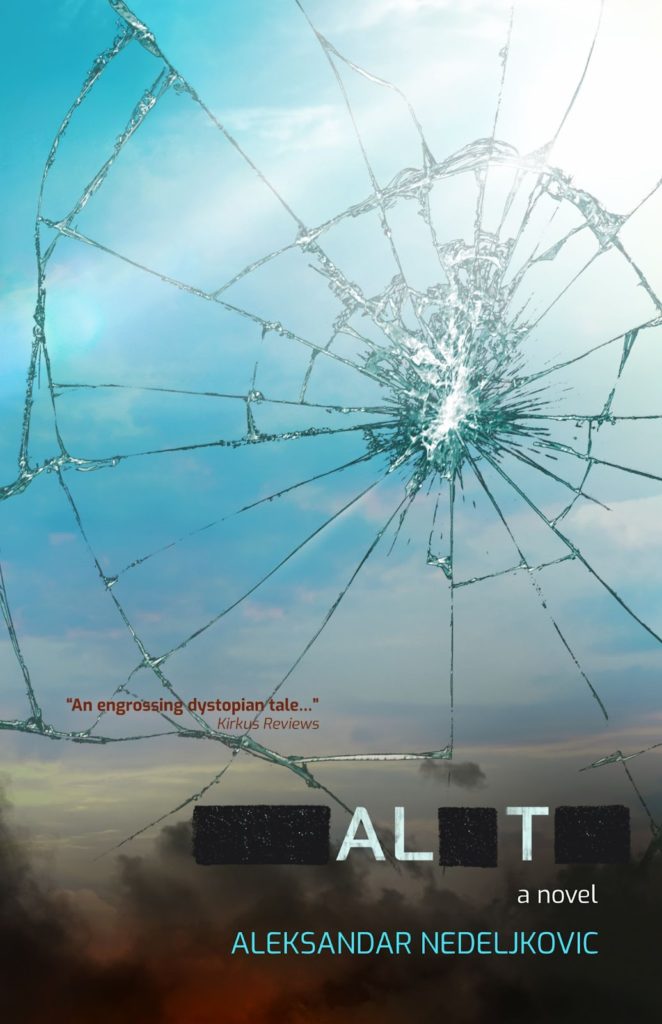 What would happen to humanity if we fail to overcome our darkest impulses? If we continue to ignore the signs of a dying planet Earth? What would follow if the United States were to disintegrate due to the social tensions and cultural divisions that are already prevalent today? If the glue that holds opposing ideological forces were to eventually wane? And what would occur if the greed of the oil industry were to compromise humanity’s last hope? In his debut novel, ALT, Aleksandar Nedeljkovic presents a world in which all of the above has become a reality – but ultimately offers a glimpse of hope.

ALT by Aleksandar Nedeljkovic tells the story of Theo Smith, a computer scientist who is trying to recreate his father’s long-lost invention. Augustus Smith was a pioneer in alternative energy technology who devised Chorus, a new generation solar panel that captured the sun’s energy through chlorophyll and resonance energy transfer, a process known as artificial photosynthesis. However, a month after Augustus presented his findings, his laboratory burned to the ground and he died under suspicious circumstances. Now, a group of scientists is working with the Atlantic Commonwealth (part of the now dissolved United States) to develop  Sundance, a solar energy collection and delivery system that promises to solve two of the biggest challenges faced by civilisation: the global energy crisis and climate disruption. However, in order for the project to work out, they need to recover Augustus Smith’s design of Chorus, and they can’t do this without Theo’s help.

Although the Atlantic Commonwealth keeps the project secret for safety precautions, a private security corporation known as Sheng Long invades Theo’s home and kidnaps him and his wife, Maritza. Their son Miles barely escapes with the help of their neighbour, Lupo “Moonie” Belan, who happened to be driving by at exactly the right time. After this series of events, the novel then focuses on a different character in each chapter: some track Moonie and Miles as they flee east, while others show Theo and Maritza’s captive situation. It turns out Sheng Long was hired by Epiphany Resources, an open-pit mining operation. The CEO, Stuart Fletcher, is attempting to create an algorithm that can identify the optimal conditions for abiotic generation of hydrocarbons – and he can only do this with the help of a computer scientist as skilful as Theo Smith. At the same time, some chapters focus on the agents Russ and Weiss from the Atlantic Commonwealth Intelligence Service, as they race to free Theo and Maritza as well as find Miles before Sheng Long does.

The world built by Nedeljkovic seems largely plausible in many ways: specifically, he proves to be very familiar with the present political climate in the United States and how the situation may develop in the not-so-far future. Against a backdrop of increased social tensions and cultural polarisation, along with an outdated two-party system that fails to reimagine itself, the novel presents a future in which the “economic opportunity that was always the glue that held together the opposing ideological forces throughout American history waned” (p. 96). In this scenario, the only former US states that do not join the Atlantic Commonwealth are California, Hawaii, Alaska and Texas. The latter then absorbs Oklahoma, New Mexico, Louisiana and Mississippi, along with the Mexican states of Nuevo Leon of Tamaulipas, while also creating armed turmoil in Tijuana and San Diego.

However, in contrast to the complex near-future world presented by the author, the plot can feel overly simple. It is mostly a description of events and at times reads like an action movie – which is likely due to Nedeljkovic’s background in television and film. For instance, after Miles and Moonie narrowly escape Sheng Long,  a large part of the plot is devoted to an ultimately inconsequential manhunt where the characters lack development. Additionally, Theo and Maritza’s rescue is surprisingly easy, and the apparent inherent goodness of the Atlantic Commonwealth Intelligence Agency reads as naive and idealistic at times. In a similar sense, the rest of the characters lack depth, and as a reader it is difficult to be invested in the future of anything other than the planet.

In addition, all of the main characters are men. The only women are either the mothers and wives of these characters (Theo’s wife and Miles’s mother, Maritza, is present in some scenes, but we do not learn anything about her except that she grew up in Eugene, California, does yoga, and is an architect), or sexual objects that they interact with. On the one hand, and rather ironically, the depicted sexist dynamic would perhaps be seen as social criticism if the novel was set in the past and not the future. On the other, it could have been a part of the dystopian situation if there was an explanation for it, but there is none.

Nevertheless, Nedeljkovic does show a good understanding of the technological possibilities that lie ahead of us as alternatives to ecological destruction (such as the above-mentioned artificial photosynthesis). What’s more, towards the ending he also proves to have a clear grasp of the global response that would be needed if humanity were to overcome all the challenges presented in the novel. In this sense, the author offers a ray of hope: he lays out a situation in which it is possible to save the planet without self-interest conflicting with the greater good (as it very often does). This is reminiscent of a theory brought forward by Varvarousis and Kallis, who suggest to approach alternative economies and practices as commoning projects. Although Nedeljkovic does not use this label, it would seem that he presents Sundance as a planet-saving commoning project, which is refreshing and necessary (and readers might even wish that the book had focused more on this aspect). All things considered, we need fiction that conveys alternative and utopian ideas like this one, as it can inspire individuals and communities – and ultimately help shed some light in the face of crises such as climate change.

María is passionate about disseminating information in an accessible and compelling way, and she is particularly interested in the intersection between environmental and social issues. She holds a research master's degree in Arts, Media and Literary Studies from the University of Groningen (with a specialization in migration literature) and a bachelor's degree in Hispanic Language and Literature from the National Autonomous University of Mexico. She has experience writing, editing and translating.