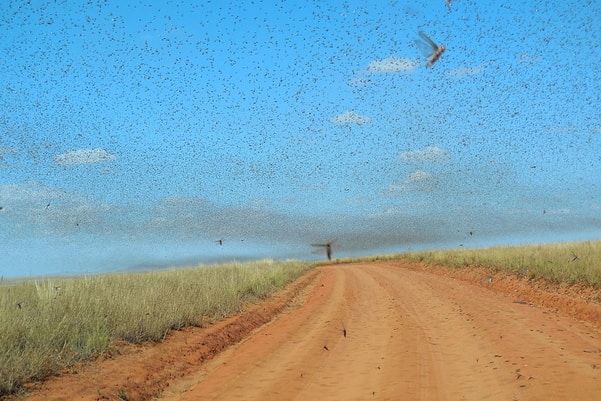 Desert locust swarms have been multiplying across East Africa and the Middle East since January as a result of unusual climate processes. The desert locusts are crop-devouring insects that travel in swarms over 1 200km in size and eat as much in a single day as 35 000 people. Swarms are now plaguing parts of India and Pakistan, and a second wave of locusts is beginning to form in Kenya, Ethiopia and Sudan. The COVID-19 pandemic is hampering efforts to stop the spread of the swarms of locusts, exacerbating the pressure on the already food insecure region’s food supply.

The current spate of locust swarms has affected communities in 23 countries, stretching from Tanzania to Pakistan. The locusts have most recently invaded Western India, affecting over 50 000 hectares of land, and Pakistan. According to the Food and Agriculture Organisation (FAO), an estimated 38% of Pakistan’s territory is now a ‘breeding ground’ for locusts, resulting in the worst locust plague in over three decades.

In East Africa, the last major desert locust swarm hit at the end of the harvest season in February, resulting in an estimated US$8.5 billion in damages to crops, livestock and other assets. A new generation of locusts is now expected to hatch in the region in June. This may have an even greater impact on crops as this outbreak will coincide with the beginning of the harvest season. The new swarm is also expected to be larger. “I can’t tell you if it’s by 20 times, but [the population] is much bigger,” comments Cyril Ferrand, FAO Resilience Team Leader for East Africa. As a result, the FAO is predicting that up to 25 million East Africans may suffer from food shortages in 2020.

The outbreak of the COVID-19 virus has further complicated efforts to combat locusts. New safety regulations have disrupted supply chains, making it challenging to transport pesticides and other equipment to badly affected areas, while border closures have hampered essential personnel movement. Locust swarms travel quickly, covering up to 100km per day, so the ability to expediently move equipment and personnel is essential.

While the world struggles to contain the COVID-19 virus, many communities affected by locusts feel like the swarms pose a more immediate threat. “Some people will even tell you that the locusts are more destructive than the coronavirus,” says Yoweri Aboket, a farmer in Uganda. The coronavirus has also impacted local communities’ ability to respond to the swarms threatening their livelihoods. “If the coronavirus was not around I could’ve sought help, but there’s nowhere I can run to now. All places are closed,” says Tiampati Leletit, a farmer in Northern Kenya.

The swarms are the result of unusually high levels of precipitation in the Arabian peninsula, likely caused by changes to the climate and environmental degradation. However, the response to the locust swarms also has the potential to negatively impact the environment. As locusts ravage crops, some farmers have had to resort to cutting down trees to sell for charcoal, resulting in deforestation. Efforts to combat the locusts also include widespread pesticide spraying, which can affect crop growth and lead to the death of domestic and wild animals.

In January, the FAO appealed for $76 million in funds to support the fight against desert locusts, a sum that was upped to $153 million in April as the swarms expanded their range. So far, 85% of this target has been raised. With this sum, responders have been able to save up to 720 000 tons of wheat, enough to feed 5 million people.

This is a promising start, but governments and organisations will need to continue to work together to curtail the locusts’ spread. During plagues, desert locusts can affect 20% of the world’s land mass, damaging the livelihoods of a tenth of the global population. This unprecedented risk has been complicated by the coronavirus, but we still have the opportunity to support those who are most vulnerable. The World Bank, for example, recently made $500 million available to preserve food security and protect the livelihoods of those impacted. Further similar efforts will be required in tandem with broader efforts aimed at combating the climate crisis that gave rise to this generation of locusts.

This is a follow-up piece to Earth.Org’s first story about the locust swarms plaguing parts of Africa and Asia. See the first piece here.