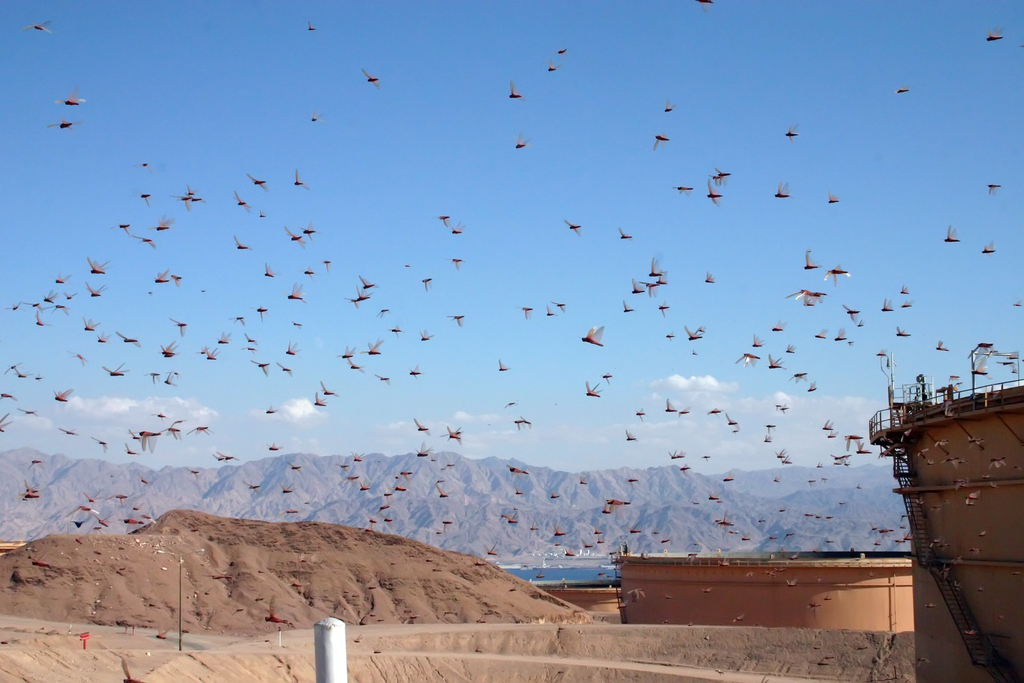 Massive swarms of locusts have swept across much of East Africa, including Uganda, Tanzania, Kenya, Ethiopia and Somalia, decimating food crops. The Food and Agriculture Organization of the United Nations (FAO) has warned that these swarms threaten millions more people with hunger in an already fragile region.

Some Desert Locusts swarms measure over 1200 square kilometers in size, an area roughly the size of Hong Kong, and contain 40-80 million locusts per square kilometer. Swarms of this size are estimated to eat as much food in a single day as over 40 million people. In a region that relies predominantly on smallholder agriculture, the increase in insects could quickly worsen food insecurity. “This has become a situation of international dimensions,” said FAO Director General Qu Dongyu.

Kenya, a key economic player in the region, hasn’t seen swarms of this size for more than 70 years. One especially large swarm in the north-east of the country measured 60km long by 40km wide. Ethiopia and Somalia haven’t observed destruction on this scale in over 25 years, and are struggling to contain the outbreak with aerial pesticides.

The swarms shroud forests, ravage crops and cloud the skies, destroying hundreds of thousands of acres and leaving over 13 million people vulnerable to acute food insecurity. Abdinasir Hamud, a farmer in Northeastern Kenya said, “they attacked the corn and literally ate everything, leaving nothing but the stalk…we’ve lost at least 250,000 Kenyan Shillings (US$2400).”

Desert Locusts move at 150km an hour, and could quickly spread across the region. Keith Crossman, an expert on locust forecasting, noted that ‘the risk is very high that additional countries could be affected in the coming days’. Countries such as South Sudan, where almost half the country faces food insecurity and which are not typically affected by locusts, could be hit next. Small swarms have already been reported in Uganda and Tanzania.

The infestation is likely due to rapidly changing weather in East Africa. The region has seen unusually high levels of precipitation over the past six months, flooding the landscape in a season that is typically referred to as the ‘short rains’. Although rain is expected at this time, rainfall has been 400% heavier than usual, resulting in landslides and flooding that have killed more than 250 people in the past few months.

This year, however, the temperature difference between the two oceanic poles spiked to 2 degrees Celsius, resulting in flooding throughout East Africa and arid conditions and bushfires in Australia. This represents the most extreme IOD conditions in over six decades. Experts suspect that stronger IODs may be linked to climate change, as the Indian Ocean now houses 70% of the heat absorbed by oceans since 2003.

“The Indian Ocean is particularly sensitive to a warming world. It is the canary in the coalmine seeing big changes before others come to other tropical ocean areas,” said Caroline Ummenhofer, a scientist at Woods Hole Oceanographic Institute, during an interview with The Guardian. Ummenhofer’s research also found that IOD events have become more common over the past 150 years.

This new climate favours locusts, which have been able to breed at unprecedented rates. Further wet weather has been forecasted for the coming weeks, and experts predict that without intervention the number of locusts could increase five hundred fold by June.

The UN has made $10 million available to support pest control operations in the affected areas in an attempt to counter the swarms of locusts’ rapid growth. The next generation of locusts is expected to hatch in February, and timelines to affect change are tight. The African Solidarity Trust Fund (ASTF) has also made $1 million available in flexible funds to support relief efforts. The FAO estimates, however, that a total of $76 million is needed to fully implement ground and aerial control operations. $18 million has so far been raised.

Like many states in the region, Kenya, Somalia and Ethiopia are positioned to be some of the countries most affected by climate change, despite their low carbon emissions. Kenya ranked in the top 50 most vulnerable countries by the Global Climate Risk Index in 2017, but contributes 0.13% of worldwide global emissions. Although many leaders in the region have pledged to support action against climate change, a global effort is required to support vulnerable communities in the firing line of the climate crisis.

This is the first piece in Earth.Org’s coverage of the swarms of locusts plaguing parts of Africa and Asia. See the second piece here.