Another Side Effect of COVID-19: The Surge in Plastic Pollution 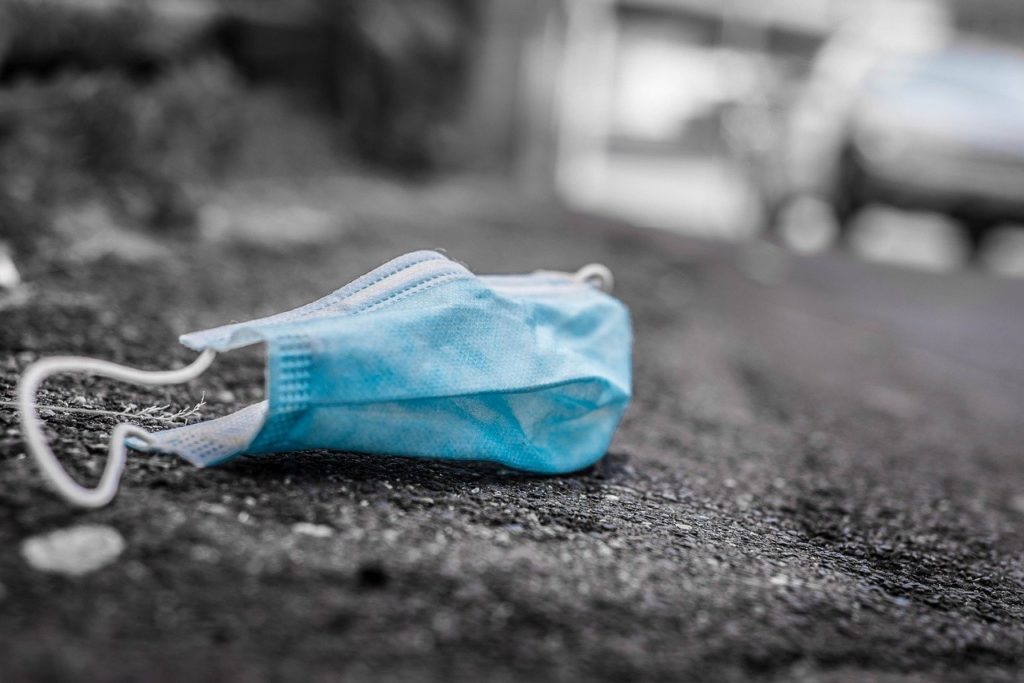 Single-use plastic is one of the greatest threats to the environment. According to the Hong Kong-based NGO OceansAsia, approximately 300 million tons of plastic is produced worldwide every year, with more than 8 million entering oceans annually- ultimately threatening the ecosystems of marine wildlife. The COVID-19 pandemic threatens to further exacerbate the scourge of plastic pollution.

Naturally, the priority over the past few months has been mitigating the contagion of the virus, which includes the implementation of collaborative protective measures. Essential components to controlling the spread include the wearing of surgical face masks and the frequent disinfection of hands. Although these two measures alone cannot stop the pandemic, they play an important role in preventing infection and are therefore vital to controlling and eliminating COVID-19.

Why is Plastic Relevant to the Pandemic?

Both face masks and hand sanitiser production include the use of plastic. Face masks typically contain polypropylene (PP), which, due to the microfibers’ hydrophobic composition, acts as a protective layer against bodily fluid droplets. Other more intricate and expensive face masks include polyurethane (PUR) and/or polyacrylonitrile (PAN).

Plastic has a lifespan of approximately 450 years, and never fully degrades but rather shrinks into smaller pieces of plastic called microplastics.

Joffrey Peltier, member of the environmental organisation Opération Mer Propre in France, came across large quantities of latex gloves, face masks and bottles of hand sanitiser in the Mediterranean sea upon exploration. Regarded as ‘COVID waste’, Peltier worries that this discovery indicates a new kind of pollution that adds to the already existing plastic problem, further threatening the environment. The organisation has urged the French public to use reusable face masks, and to substitute gloves with more frequent hand washing.

A UK-based charity, Keep Britain Tidy, fears a littering crisis amidst the relaxation of lockdown regulations and social distancing rules. With an increase in the number of people visiting beaches and parks, and gathering in public spaces, large amounts of rubbish have accumulated. Thames21, a charity that aims to maintain healthy waterways in London, suggests that people are socialising in a way that is different to before lockdown: mainly congregating outdoors. This has led to carelessness in behaviour displayed through littering, for example. Thames21 reports that the main type of rubbish found is single-use plastic, such as fast-food packaging, confectionary wrappers and drink bottles.

Keep Wales Tidy campaigners stress that significant amounts of personal protective equipment (PPE) are being littered across the country. In addition to being an environmental hazard, says Jemma Bere policy and research manager for the organisation, the littering of PPE poses a contamination risk to others: many samaritans that would typically collect litter when encountering some are no longer doing so to avoid the risk of coming into contact with contaminated PPE.

Disruption to ‘Business as Usual’

With the economy and ‘business as usual’ put on standby as a consequence of the pandemic, rubbish and recycling collection has been disrupted in many places. In a field experiment conducted by Cialdini and colleagues (1990) it was observed that participants were susceptible to the littering behaviour of those around them, and that people tend to litter more when in an already littered environment. The researchers explained that the littering state of an environment establishes the norm of behaviour later exhibited in said environment, such that others will tend to conform or adapt to this perceived norm. They concluded that the more litter present, the more people are likely to litter, causing a positive feedback loop. As human beings are social animals and susceptible to conformity, a way to tackle this issue is to enforce correct attitudes towards the environment through education and raising awareness.

Shadi Moqbel, a civil engineer and waste researcher at the University of Jordan, noted that some of the patterns observed with COVID-19 are not novel, and rather mirror a similar trend observed in previous outbreaks, such as the H1N1 (swine flu) virus. As a result of the pandemic, people are gravitating towards disposable items rather than reusable ones in attempts of being hygienic. Moqbel also stated that people are using more single-use plastic plates and packaging material due to a rise in food deliveries and takeout meals.

OceansAsia reported a stark increase in marine debris and microplastics build-up in Hong Kong since January, and found large quantities of face masks littered along beaches and rural suburbs. On a beach in Lantau Island, the organisation reported finding 70 face masks disposed across an area just 100 meters long, with an additional 30 washed up on shore. This raised concern among members as the area is relatively uninhabited and is difficult to access, providing insight into potential larger littering figures across more popular beaches.

Another local environmental organisation, the Conservancy Association Hong Kong (CAHK), has expressed similar uneasiness about this new type of pollution caused by careless behaviours with face masks. CAHK stresses the importance of raising awareness and educating the public on how to correctly dispose of face masks, as well as to inform on the health risks associated with incorrect disposal. Although the common consensus among medical professionals in Hong Kong is that single-use face masks are effective in mediating the spread of COVID-19, they have noted that correct disposal after use is important. The Centre of Health Protection (CHP) guidelines state that soiled tissues and used surgical face masks must be discarded in lidded bins to control the spread of the virus.

In an attempt to tackle the plastic pollution problem amidst Covid-19, the environmental group Greeners Action in Hong Kong has urged restaurants to encourage customers to bring their own tupperware when ordering takeout. The group surveyed over 2 000 participants in early April and found that people are ordering food at a rate more than twice as high as last year, indicating a surge in single-use plastic consumption, most probably due to social distancing measures.

Jac Lun, project officer of Greeners Action, suggests opting out of receiving disposable plastic materials when ordering takeout, and for consumers to pick up their food directly from the restaurant or cafe. Lun further elaborated by saying that tupperware is potentially safer than single-use plastic in terms of hygiene, and that restaurants should offer rebates to customers that bring their own food containers. The ideal solution would be to cook at home, Lun says, as this way there is less fear regarding risk of contamination and less contribution to the already troubling plastic pollution problem.

Short-term solutions include fines, labels on disposable items, making information on littering and how to recycle more available to the public and potentially designing more eye-catching and ‘fun’ refuse bins to encourage interaction.

As a silver-lining, Joubert and colleagues (2020) believe the environmental emphasis on plastic pollution will return to the limelight once the COVID-19 crisis is under control. In the meantime, the researchers suggest recycling single-use plastic utensils and containers, limiting food deliveries and ordering from grocery suppliers that offer more sustainable delivery packaging.

With the European Green Deal underway, there is a great appeal for companies to invest in innovations that can help alleviate the plastic crisis in the long-term. Similar to the way in which ‘banning plastic straws to save the turtles’ started an influential trend, many brand owners should implement similar measures to regulate their use of plastic and to further establish environmentally sustainable products as ‘trendy’.

Furthermore, academia should aim to best educate society, manufacturers and policymakers on how to make more environmentally-friendly decisions.