Over the last forty years, rising temperatures have accelerated ice loss from the ice sheets and glaciers that cover around 10% of the Earth’s land area. Due to extreme warming above the Arctic circle, the Greenland Ice Sheet melting rate has drastically accelerated, which is expected to continue into the future.

The Greenland Ice Sheet (GrIS) holds enough water to raise average global sea levels by 7.4 metres. It has been losing mass for the past few decades due to surface meltwater runoff and the loss of water adjacent blocks of ice, termed ice discharge.

GrIS meltwater runoff has accelerated since the early 2000s, largely due to atmospheric and oceanic warming. The average winter near-surface air temperature rose 2.8°C over the 100-year period from 1911 to 2012. A recent study observed that discharge increases by 4-5% per mean kilometre of glacier retreat. This means that the more GrIS melts, the quicker its discharge, whose rate is 14% higher today than during 1985-1999.

Since 1978, Arctic sea ice extent has visibly decreased for all months of the year, with a reduction of around 10 to 12% per decade in the month of September (yearly low). 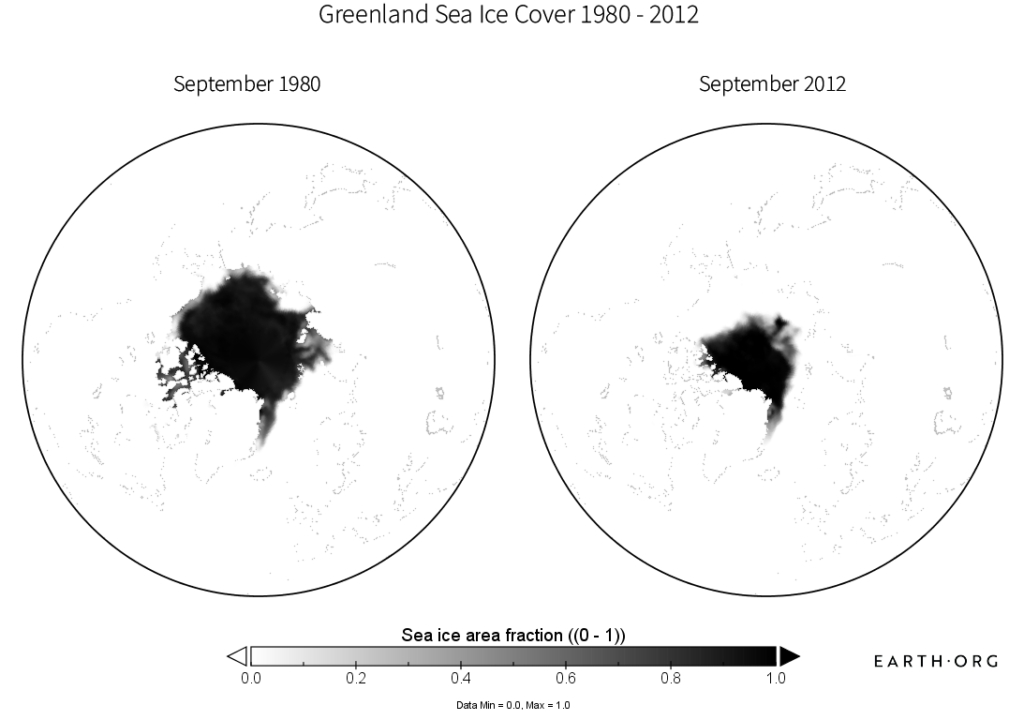 From 2006 to 2015, the Greenland ice sheet lost ice mass at an average rate of around 270 gigatons per year. To put that into perspective:

What are the potential impacts of the Greenland Ice Sheet melting?

So far we have just considered Greenland’s ice sheet. This, combined with a rapid breakup of West Antarctic ice sheets could result in up to 5m of sea level rise by the end of the century (although this is the worst case scenario imaginable).

This would disproportionately affect developing countries, particularly Vietnam, Egypt and the Bahamas. Places like West Africa are already feeling the bite.

As a final bombshell, if we ignore ice sheet instability then it is estimated that sea levels will still rise by 1 – 2 m resulting in the forced displacement of up to 630 million people, 70% of which will come from just 8 countries in Asia (for more on this, check out our Sea Level Rise by 2100 series here).