Despite the global economic slowdown as a result of the COVID-19 pandemic, deforestation in the Amazon in Brazil is increasing rapidly, having risen for 13 consecutive months relative to year-earlier figures and reaching the highest level since monthly data started being released publicly in 2007, according to official data released by the country’s national space research institute, INPE.

The institute’s deforestation monitoring system, DETER, detected 406 sq. km of forest loss in the ‘legal Amazon’ during April, bringing the overall extent of deforestation measured by the system to 9 320 sq. km for the year ended April 30, 2020, 40% higher than a year ago and more than double the level it was in April 2018.

Deforestation in the region, representing nearly two-thirds of the entire Amazon rainforest, has been increasing steadily since 2012, when 4 571 sq. km of forest were lost. Prior to this, deforestation had been declining because of better monitoring and environmental law enforcement, public and private sector efforts to curb deforestation and the creation of new protected areas and indigenous territories. 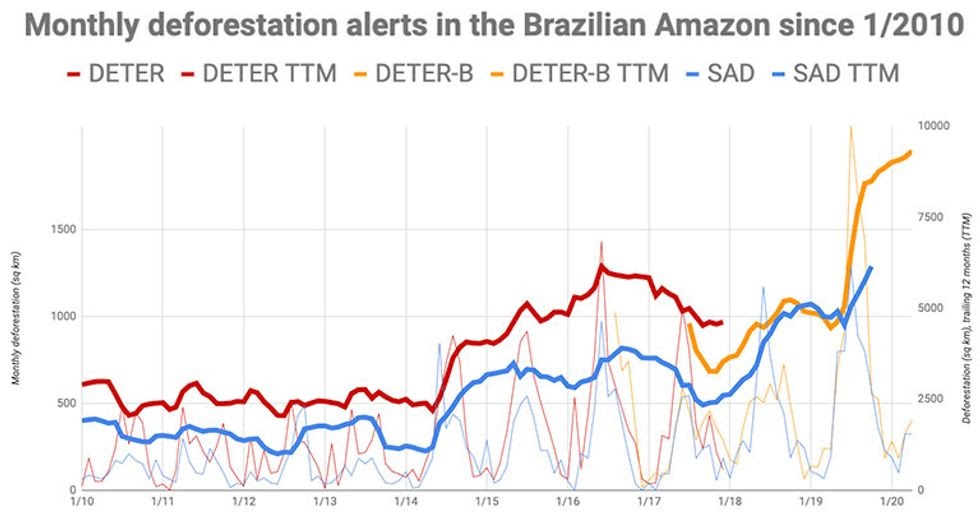 According to a 2014 study, the drop in deforestation in the region between 2004 and 2013 avoided the GHG emissions equivalent of taking all cars off US roads for three years– 3.2 billion tonnes.

Causes of Deforestation in the Amazon

The rise in deforestation has been noticeably higher since President Jair Bolsonaro came into power in January 2019. Bolsonaro is a notable anti-environmentalist, evidenced by him rolling back environmental regulations, granting amnesty from fines for illegal logging, cutting budgets for environmental law enforcement and disregarding the role of scientists in the government, blaming environmental NGOs for deforestation, claiming without evidence that actor Leonardo DiCaprio funded last year’s fires in the Amazon and opening protected areas and indigenous territories for extractive industries and agribusiness.

Bolsonaro encourages deforestation in the Amazon, calling it a way to lift the region out of poverty. His administration has also sacked officials charged with protecting forests and indigenous people against illegal land invasions.

Brazil has now deployed thousands of soldiers to protect the rainforest due to concerns about the surging levels of deforestation ahead of the country’s high season for forest fires. The decision to deploy troops was made three months earlier than in 2019.

The government says that the operation has begun in a national forest in Rondonia state, near the Bolivian border, with 3 800 soldiers.

The military is currently authorised for deployment until June 10 but it could be extended as the dry season approaches, when forest fires tend to spread.

The government has said that the armed forces would continue to be used until environmental agencies, such as the enforcement agency Ibama, increase their staff. Budget restrictions and an economic downturn has prevented Ibama from hiring any new agents.

Last year, fires in the Amazon made international headlines when NGOs, human rights groups and business and political leaders called for boycotts of Brazilian companies and products, which prompted Bolsonaro to mobilise the army to help with fire-fighting efforts. Yet, he continues to push policies that will increase deforestation and fires nonetheless.

Scientists warn that the entire biome may be nearing a tipping point where large areas of wet rainforest could transition to dry tropical woodlands and savanna. New research says that the Amazon could turn into a source of carbon instead of one of the biggest absorbers of the gas as soon as the next decade as a result of the damage caused by increasing deforestation in the Amazon, illegal loggers and the climate crisis.

It is bizarre and dangerous that the Brazilian administration has such a wanton disregard for the health of the Amazon rainforest. There is plenty of evidence that economic growth need not come at the expense of the environment and in fact, research suggests that renewable energy could in fact spur economic growth post- COVID-19. It is imperative that global leaders continue to pressure the Brazilian government to do more in curbing deforestation, or the health of the planet will be at stake.