Does China Have a Pork Crisis? 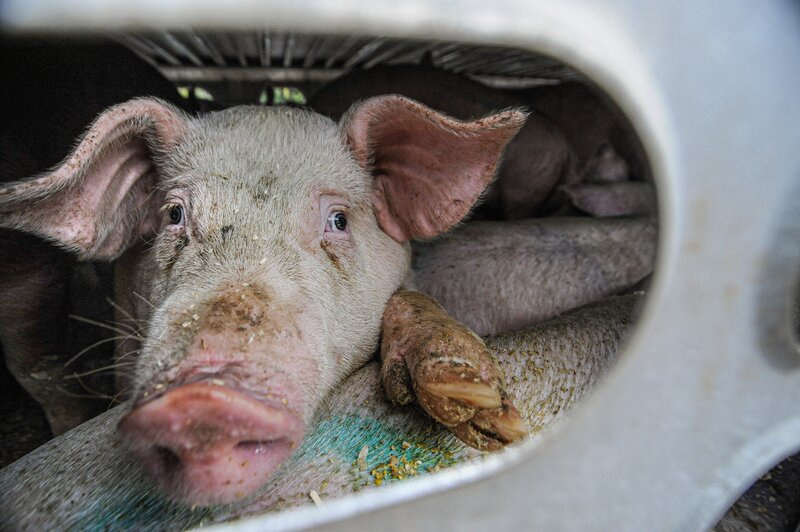 Pork is a big deal in China. As the world’s largest pork consumer, the average Chinese citizen consumes 30kg of pork a year (by comparison, US citizens each eat about 26kg of beef a year and UK consumers about 18kg). Decades of economic growth have enabled China’s leaders to make considerable strides in increasing food access across the country. To meet this demand for pork, China is home to the largest number of pigs of any country with over 310 million pigs of the 677.6 million pigs produced for meat consumption worldwide. For China’s pig production, this accounts for 340 million tonnes of CO2 equivalent per annum – about 4.4% of the livestock sector. This contributes to China being the world’s largest greenhouse gas emitter accounting for approximately 27% of global GHG emissions with its GHG emissions expected to peak by 2030.

However, China is facing a chronic pork shortage after the spread of African swine fever (ASF) since August 2018 that has so far resulted in the death of 350 million pigs in China with farmers not restocking their livestock after sick pigs die or culling them, causing pork prices to double since 2018. The Chinese government is turning to radical solutions; for example, the construction of multi-level industrial biosecure pig farms near urban areas. But for how long can the Chinese government continue to prioritise food security over the environment to satisfy consumer appetites?

The country has proposed a multitude of measures to tackle the pork crisis that support larger farms, including financial support, and setting pig production targets for each province. Authorities are also constructing the biosecure pig farms in urban areas to add 200 million pigs to its nationwide herd over the next 2 years. These farms are believed to be more efficient as they are less labour intensive and require less land per pig.

Although urban pig farm owners believe modern farms are less likely to damage the environment, these urban farms are reversing years of policies to relocate the livestock over waste concerns. To reduce harm to urban environments, Chinese pig producers must invest in building waste treatment facilities that cost about 500 yuan (USD$70.57) per sow to prevent farm waste from polluting urban areas. Furthermore, farms close to cities must meet higher quality standards in terms of water discharge as well as odour prevention costs. Assimilating environmental risks to urban environments as farmers may not invest in technology and in environmental regulation quotas.

Furthermore, there are also biosecurity concerns as raising pigs closer to people increases the risk of the transmission of viruses like African swine fever. Pigs have a unique capacity to incubate viruses that can bounce between humans, birds and pigs, swapping genes in a process called “reassortment.” So acute is their incubation capacity that hogs are considered potential “mixing vessels” for future pandemics.

Whilst urban pigs farms may be one of the solutions to the pork crisis, it’s radical approach to farming suggests that in attempting to secure food security to feed its 1.4 billion population, China is willing to do it at the expense of its own environment.

The Chinese middle class are now more spoilt for choice in terms of the goods and services they have access to, growing from 29 million in 1999 to roughly 531 million in 2013, which is forecasted to reach 550 million by 2022. The emergence of China’s urban middle class has corresponded with a shift away from a grain-orientated diet to an increasingly meat-heavy diet. This may be a difficult trend to buck as there are strong cultural traditions attached to the consumption of many animals, especially pigs. In 1975, China consumed 7 million tonnes of meat, which increased to 86.5 million tonnes by 2018, making it the largest meat consumer in the world. 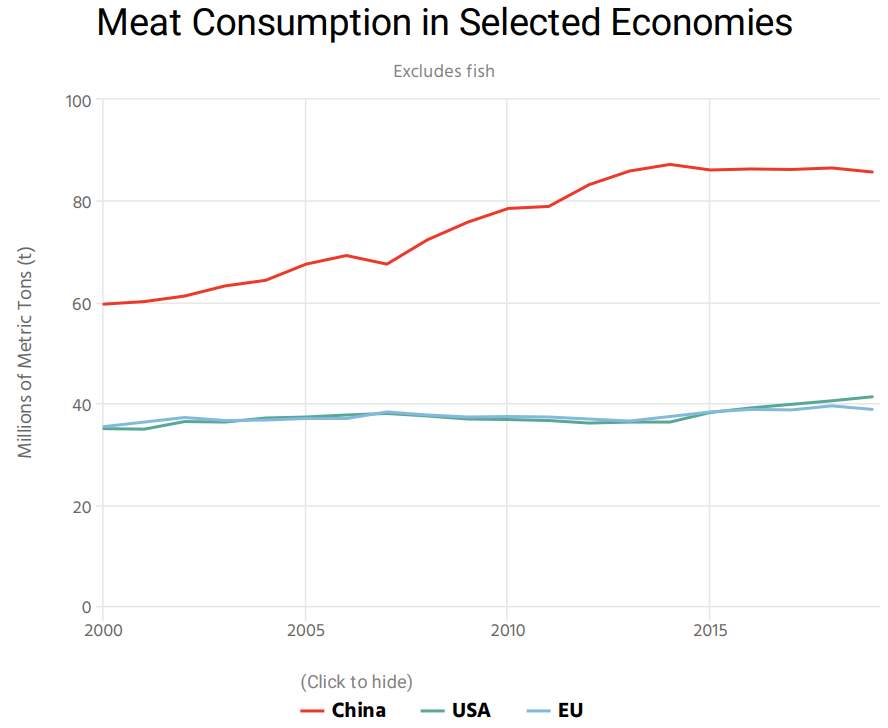 “One could argue that Chinese just want to enjoy the kind of life Westerners have for years,” says Pan Genxing, the Director of the Institute of Resources, Environment, and Ecosystem of Agriculture at Nanjing Agricultural University.

The exploding demand for meat can be largely attributed to changing demographics that potentially threatens China’s food security. Of which, the government faces the dual challenge of maintaining economic growth while ensuring the growing population is fed.

While China contributes to emissions outside of its borders by exporting coal equipment and financing overseas coal plants through its Belt and Road Initiative, it is at the same time shifting the adverse environmental effects of meat production to other countries to feed its population. 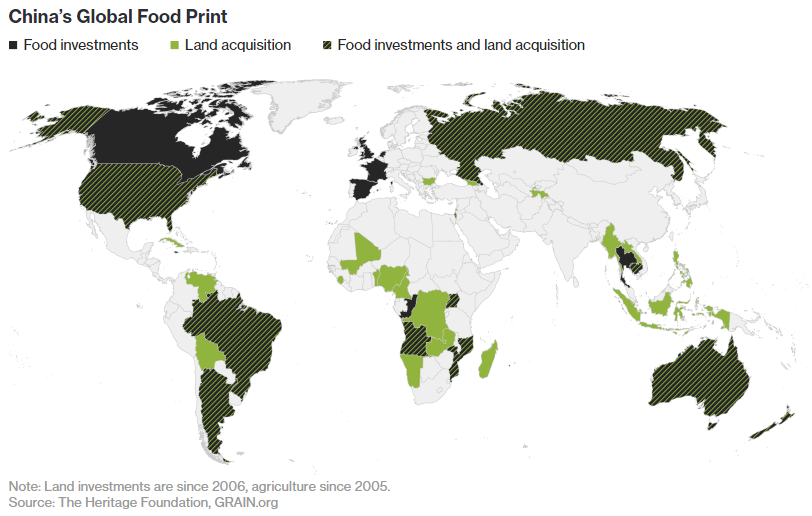 Alongside China purchasing farms in the US, Australia and other nations to provide feed for the country’s livestock industries to deal with the current pork crisis, China plans to turn Argentina into one of its main pork suppliers with a $3.5bn investment that includes the installation of 25 hog farms with about 12 500 sows each. This would double Argentina’s current 350 000 sows and boost annual production from 700 000 tonnes today to 900 000 tonnes by 2024.

Furthermore, the Argentinian government sees the China deal as an opportunity to turn its main exports – maize and soybean, sold principally as animal feed to China and Europe – into a value-added product. However, meeting China’s target would require hundreds of thousands of additional hectares to be turned over to maize and soybean crops, likely adding to Argentina’s runaway deforestation in its fragile Gran Chaco forest, the second largest forest in South America after the Amazon.

While China is increasingly becoming recognised as the world leader in green energy, it remains substantially pressured by a multitude of other environmental challenges stimulated by its ambition for greater economic growth. This includes difficulties with ensuring businesses and local governments comply with policies and regulations, as well as gaps in its climate policies. In addition, China is still the biggest producer of coal, producing nearly 3.5 billion tonnes in 2018, representing 46% of the global total coal yield and consuming more than half of the world’s total coal consumption.

Despite these setbacks, China’s climate action is showcased through aggressive investments and a bold mix of climate, renewable energy, energy efficiency and economic policies. Notable examples include recently committing to achieve carbon neutrality by 2060, recommitting to achieve the Paris Agreement goals in 2019 as well as implementing plans to tackle GHG emissions by decreasing meat consumption by 50% by 2030.

Addressing Chinese consumer habits is another way to alleviate the pork crisis. Food waste is a massive problem in the country, with up to 18 million tons being wasted in large cities every year. Hence, the country is attempting to tackle the problem through its “Clean Plate Campaign,” but it could also invest more heavily into the alternative protein industry to secure food security and at the same time, ensure the country is going green. If the country fully executes existing climate policies, its carbon emissions are likely to peak well before its 2030 target.