Effects of Air Pollution on the Environment 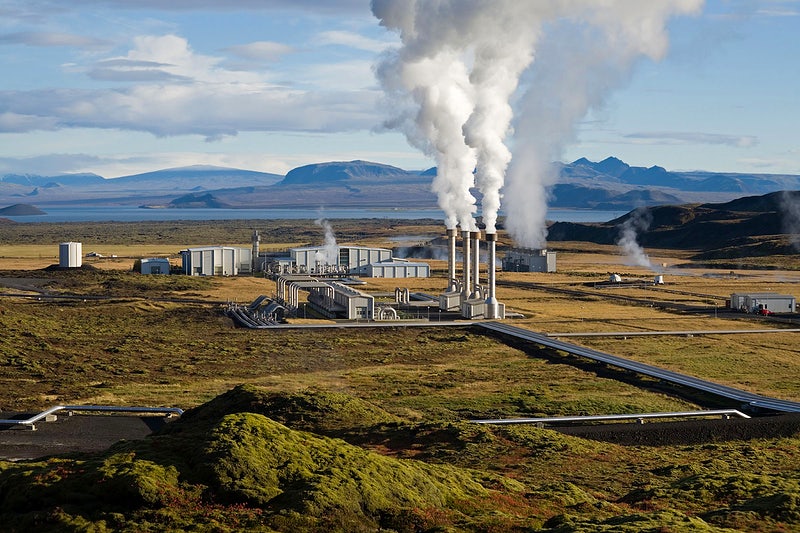 Air pollution is a relatively less discussed problem since it is often invisible, except the extreme cases like smog in Beijing, and its effects do not manifest themselves in an instant but over a long period. Nevertheless, the negative effects of air pollution on the environment can be vast and significant, and are the culprits of many unnatural environmental phenomena.

What is Air Pollution and How is It Measured?

The most well-known indicator of air pollution is the Air Quality Index (AQI), which rates cities all over the world at a scale of 0 to 500. A lower value indicates a lower level of air pollution, and vice versa. It should be noted that each country has its own AQI, but most countries include the measurement of five major air pollutants: ground-level ozone, carbon monoxide, sulphur dioxide, nitrogen dioxide and airborne particles. These air pollutants are formed due to different complex chemical reactions; air pollution can be generally ascribed to burning fossil fuels.

Effects of Air Pollution on the Environment 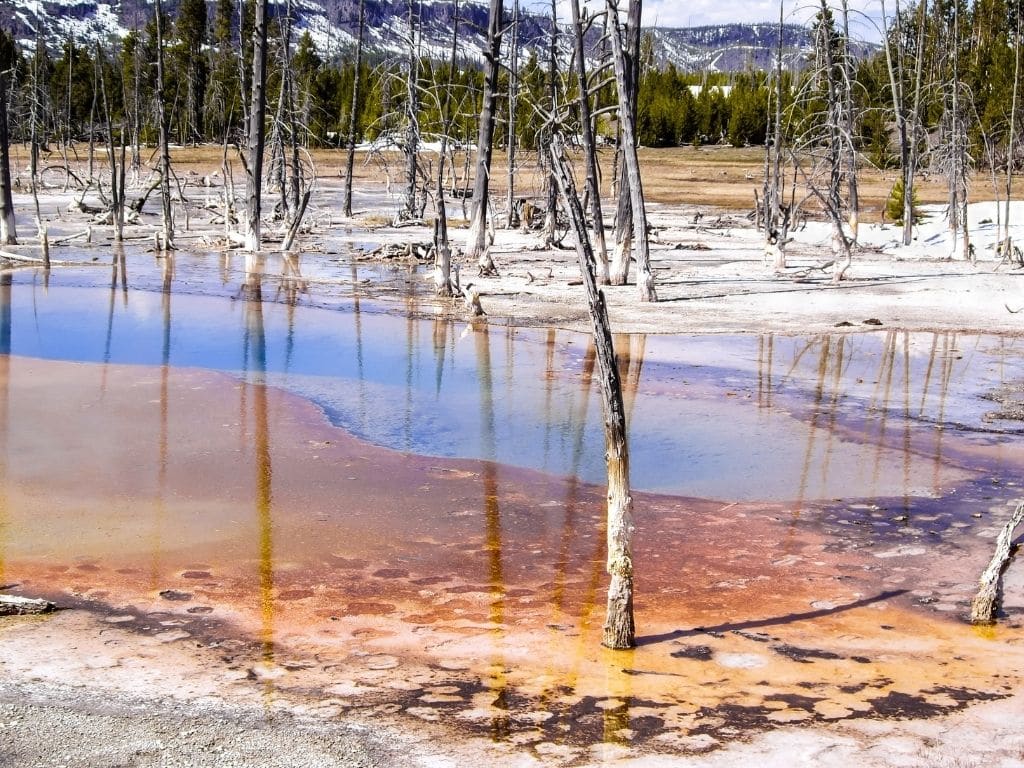 Pure water, meaning distilled water or deionised water, has the value of pH7 whereas water from rainfall is between 5 and 5.5, which is slightly acidic. Rainwater will become much more acidic when it is mixed with certain air pollutants such as sulphur dioxide and nitrogen dioxide. Typically, rain with a pH value of 4 is considered acid rain, of which the acidity is 10 times that of pH 5. Acid rain is incredibly harmful to natural ecosystems, in particular, its impact on soil. About 45% of the components of soil are minerals including aluminium. If soil becomes acidic, its aluminium will become soluble and interfere with the root’s cell division as well as its ability to elongate. At the same time, essential nutrients for plants such as calcium will be reduced by exposure to acid rain; this makes it difficult for plants to consume water. Acid rain also threatens wildlife, especially aquatic animals since most function at the optimal pH value between 6.5 to 8.5. 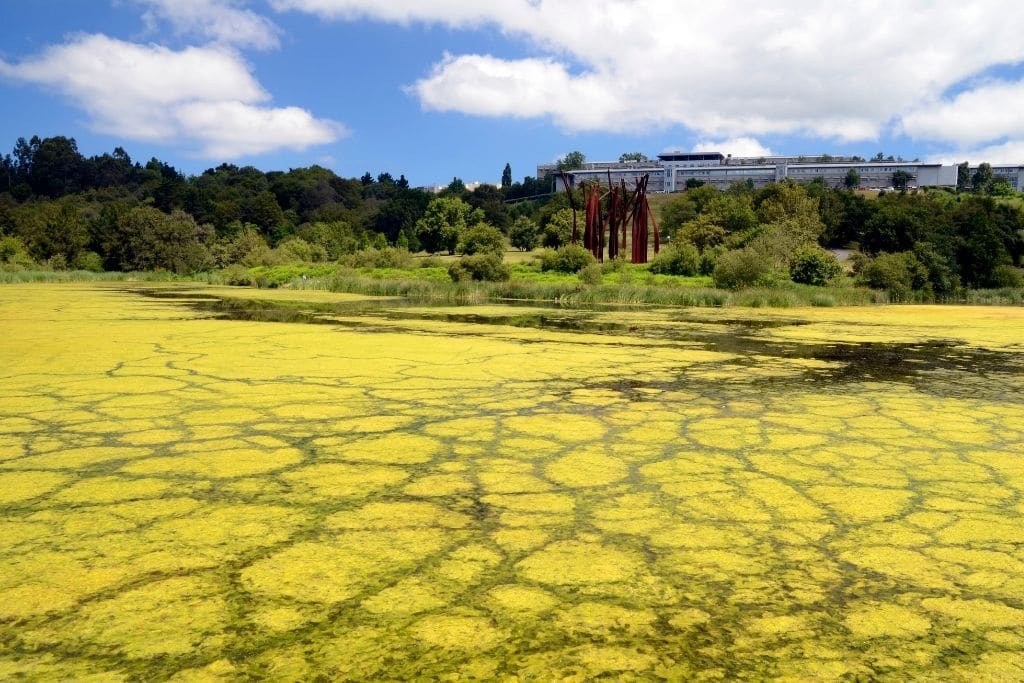 Eutrophication is the situation in which a waterbody is enriched with minerals and nutrients that may eventually result in excessive growth of algae. Algae not only blocks out the sunlight from underwater plants, which is necessary for photosynthesis, but it also consumes large amounts of oxygen in the water.  Consequently, aquatic plants and animals may die due to the scarcity of nutrients in the water.

Although this phenomenon can occur naturally, it is indisputable that human activities have been accelerating the process. Nitrogen dioxide that is excessively generated during the production of energy is one of the fundamental nutrients that the growth of algae requires. The use of fertiliser also contributes to eutrophication as nitrogen fertiliser is often applied in agriculture for multiple reasons: Increasing the speed of development of plants, preventing leaves from turning yellow et cetera. Excessive fertiliser not absorbed by plants that are left on the land will eventually be deposited into the waterbody nearby via rainfall.

The relationship between air pollution and climate change is complex as air pollutants are generally distinguished from greenhouse gases in terms of their effects, even though they are produced from similar sources and human activities.

Air pollutants are substances that have direct impacts on our health and the ecosystem while greenhouse gases damage the planet by warming it, which threatens the survival of all lives on it. Yet, on some occasions, this categorisation results in an overestimation of the scale of the differences between the two categories. Some air pollutants such as ground-level ozone also possess warming power, which can trap heat from the sun in the atmosphere.

However, it is worth noting that some air pollutants have been discovered to have a positive effect on resisting climate change. Aerosol, a suspension of airborne particles usually formed during the process of burning fossil fuels, is found to possess cooling power. Aerosol helps to cool the planet in two different ways: to change the amount of solar energy entering and leaving the atmosphere, and its ability to form clouds. Since aerosol is mostly light-coloured, it can bounce solar radiation back to space. The cooling power of aerosol can be enormous. For example, during the volcanic eruption of Mount Pinatubo in the Philippines in 1991, about 20 million tons of sulphur dioxide and ash particles were blasted into the atmosphere over 12 miles. Afterwards, the planet cooled for two consecutive years.

Its other cooling power is its ability to facilitate the formation of clouds. To form a cloud, water vapour needs to be condensed into water droplets. Condensation will not be possible without airborne particles, which provide surfaces for water vapour to transform itself into liquid. More surfaces reserved for condensation are available in the atmosphere due to the emergence of aerosol, more clouds are hence formed. The cooling power of clouds can also be attributed to the light colour, which helps to reflect the sunlight out to space. Scientists have been exploring the possibility of manipulating aerosols to slow down climate change, but the challenge is to control the number of airborne particles within a range where no threat is posed to our health and the ecosystem.

Despite most air pollution being generated from burning fossil fuels, as much as 95% of carbon monoxide comes from motor vehicles in some cities. One of the most efficient methods to reduce the effects of air pollution on the environment is by modifying the way we use motor vehicles.

There are many little things that we can easily do as individuals; instead of driving, opt for walking or biking if the travel distance is short, and use public transportation if available. The market also provides consumers with more choices, including electric or hybrid vehicles, to alleviate air pollution.

At the national level, things can be more complex since environmental policies are usually detrimental to the countries’ economic development. But there are many policies in which wealthier countries should consider and adopt, including a carbon tax system.

While the original purpose of a carbon tax is to provide an economic incentive to companies and individuals to emit less carbon dioxide by charging consumers at the point of purchase, its function is not limited to fighting against climate change. As air pollution and greenhouse gases are mostly generated from the same human activities – burning of fossil fuels, emission from vehicles – implementing a carbon tax can hit two birds with one stone.