Why are Corals Glowing? 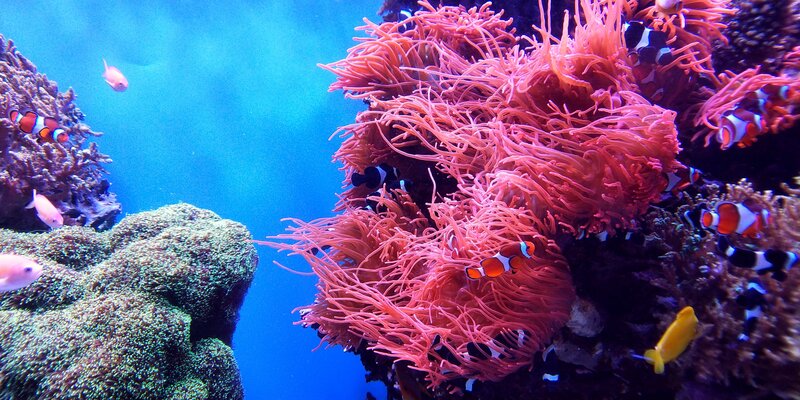 Corals are well-known for their captivating colours due to microscopic algae inhabitants. However, some have been seen glowing, which is unusual. Researchers have sought to understand the reason behind this glowing in a new study, which has found that it plays a significant role in maintaining the symbiotic relationship between corals and its zooxanthellae. How do these fluorescent pigments help corals to adapt to climate change?

In surface water, sunlight is a key driver for the photosynthetic primary production, where zooxanthellae undergo photosynthesis. Yet, high energy wavelengths such as UV rays may cause photoinhibition and photodamage to the algae. Previous studies have found that corals possess types of protein with fluorescent pigments to counteract the environmental stress induced by sunlight by absorbing or diverging the damaging wavelengths and converting them into lower-energy light such as visible and infra-red light. A similar mechanism can also be found in terrestrial plants such as blueberries, which contains a pigment called anthocyanins, to reduce light stress when exposed to sunlight.

Why are Corals Glowing in the Deep Sea?

Apart from the surface water, corals also display psychedelic colours in the deep-sea region, where there is little or no sunlight. A recent study found evidence that corals use fluorescence to increase its survival in the deep-sea environment, which serve a different purpose than that of corals living in shallow water.

Given that the deep sea environment is dominated by blue light, deep-sea corals are equipped with a specific protein, known as photoconvertible red fluorescent protein, which converts the blue light into longer wavelength (i.e. orange-red light). Orange-red wavelengths help enhance light penetration and reflection, and allow even distribution of light within the coral tissue and its skeleton, thus increasing the productivity of zooxanthellae living in deeper coral tissue.

The glowing colour may also appear in cases where coral bleaching occurs. Given that coral symbionts are sensitive to heat and light stress, corals who suffer from these stressors would result in symbiont expulsion. Experimental studies demonstrated that corals have developed a self-regulating mechanism, known as an optical feedback loop, which is triggered by the increased internal backscattering light from the coral skeleton due to reducing symbiont density in coral tissue. Corals can enhance photoprotection through increasing internal light absorption by protein pigments to lower the light stress, which in turn helps facilitate the recolonisation of symbionts on bleached coral tissue.

Scientists have just provided a new explanation as to why corals are being seen glowing in deep-sea environments, showing that it does so to adapt to environmental stresses. The study also emphasises how little we know about coral reefs and marine ecosystems. Coral reefs have long been known to be the most productive and biodiverse ecosystem on Earth and have recently been found to be a new reservoir for medicine discovery in recent years.

In view of the increasing rate of coral bleaching due to the climate crisis, effective actions will need to be taken collaboratively by government and international organisations to prevent further degradation of environmental quality.