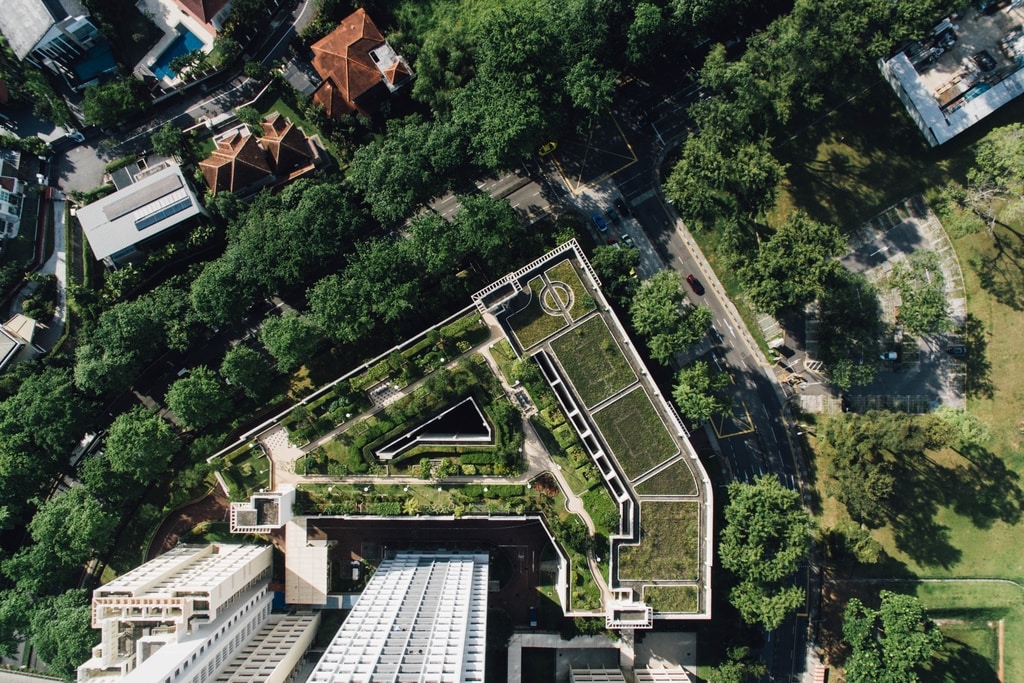 Sustainable cities are a puzzle of intelligent solutions in different areas: From urban planning, to the agriculture that feeds the city, to waste management and the mobility of its residents. In this article we show films from exactly these areas. Paths to a green and smart future for the world’s cities.

The UN predicts that by 2050, 68% of the worlds population will live in cities. Most cities as they stand now were built around industry, cars and economy – not with sustainability in mind. Smart and green cities are designed for life quality, low environmental impact, city ecology and an efficient use of resources. Information and communication technologies can be used to improve traffic flow, water use and energy supply. Further considerations include public access to green spaces, air quality and sewage management.

“The Human Scale” is a great introduction to these concepts and the problems, solutions and potential for urban development. This film centres on the visionary work of Jan Gehl, a Danish architect and city planner. His work has transformed hostile urban environments full of congestion and pollution, into havens of pedestrian living for real human interactions over his impressive 40 year career. The film examines cities around the world, from the 30 million strong population of crowded Chongqing – to Copenhagen with the worlds longest pedestrianised street, and asks how we can improve the life quality for citizens of large, congested, lonely and fast paced cities through better urban planning.

Watch excerpts of the “The Human Scale” here

In this century alone the world population will grow to 10 billion people. Where do we produce enough food from for everybody? How do we distribute food fairly? And how do we stop mankind from destroying the very foundation of its food source? In “10 billion” every level of the supply chain of the agro-industry is explored, and we are introduced to fascinating novel technologies concerning the future of food. An exciting and varied documentary covering everything from the organic movement, commercial scale slaughterhouses, artificial meat producers, and even those that advocate insects as the staple food source of the future.

Concerns over food security, food production and food quality are the some of the most pressing of our time as human populations continue to boom and suffer the effects of malnutrition. Related to this are all the wider implications of the environmental effects of toxic pesticides, loss of wild spaces to agricultural land, concerns over genetically modified organisms, and run off from intensive agriculture into water systems.

When it comes to food, we are all capable of making a direct difference: Vote for the future every-time you go to the store or the local farmers market by choosing the right things to eat.

Stream “10 billion” on Demand on iTunes, Amazon, Google Play and many more

Imagine the amount you consume, and material you throw away daily, scaled to the level of 8 billion people. Of plastic alone every year another 8 million tons are dumped into the ocean, these plastics take thousands of years to break down – and when they do it is simply into smaller fragments that are likely to be ingested by animals. The current model of simply forgetting about our waste and sending to landfill is not the right path towards green cities – a complete rethink is inevitable.

“Racing To Zero” is an inspiring and positive documentary that presents new solutions to the global problem of waste. The film advocates a complete rethink of what “garbage” is; although waste may create garbage, garbage is in itself a resource full of potential. The film follows the journey of San Francisco’s commitment to achieve zero-waste by 2020, with conversations with experts in composting and archaeology, government officials, and the very enthusiastic and proud citizens leading the country in already keeping 78% of their waste out of landfill.

Watch “Racing to Zero” as on demand

A sequel to the critically acclaimed “Who killed the electric car?”, which explored how the development and adoption of electric vehicles was originally slowed and discouraged in the United States; “Revenge of the Electric Car” follows entrepreneurs fighting to bring the electric car to market in the 21st century.

Director Chris Paine takes us behind the closed doors of Nissan, GM, and the then start-up Tesla Motors to document the story of the global resurgence of electric cars. Staying fully autonomous from any foreign oil, the documentary argues this new generation of car is the United States’ powerful and clean future. The race to develop clean electric cars is just beginning.

For motor and business enthusiasts the film is a must see, with access and unprecedented interviews with CEO and President of Renault and Nissan Carlos Ghosn, CEO of Tesla Motors Elon Musk, Former Vice Chairman of GM Bob Lutz and EV do-it-yourselfer Greg “Gadget” Abbott.

Stream “Revenge of the Electric Car”

Energy is arguably the most central question on the path to green cities and a sustainable planet. Over 90 percent of energy used today still originates from coal, gas, oil and nuclear energy. These conventional energy sources are not able to satisfy the world population’s energy demand without seriously threatening the planetary ecosystem. The production and consumption of these energy sources do not only increase the greenhouse gas emissions, fuelling global warming, but also lead to the destruction of natural landscapes, corruption, armed conflicts and radioactive contamination.

There are already numerous alternatives at hand and currently we are faced with the decision to radically revolutionise the means with which we power our societies. Wind, solar, biomass and water energy will lead to a more decentralised energy system, more energy democracy, better life quality and a more sustainable relationship to our environment. When it comes to managing a sustainable relationship to energy, we need changes to happen from the grassroots to a global scale, it It is argued that a future focused on environmental justice, will also bring with it a fairer social and political justice.

For an overview of these issues we recommend “Power to Change”, a German production available with subtitles in english. Germany is often quoted as the worlds first major renewable economy, with its share in gross electricity consumption growing from 3.4% in 1990 – to 36.2% by the end of 2017. Whats more, the renewable energy sector is providing germans with over 370,000 jobs (doubled since 2004). The film is fascinating, packed with information and accurate science, as well as captivating with personal stories from individual activists, entrepreneurs and critics who have taken personal responsibility for their energy supply in what they call an “energy revolution”.

More information, including on how to watch

A great introduction to how the future of our cities could look – this documentary follows Professors and Masters students of Urban design for a week learning about different projects underway in Singapore, one of the worlds most biophilic green cities. Greening of the city began over some 50 years ago now, under the concept of the former prime ministers vision for a “Garden City”.

We speak with architects, landscape designers, CEO’s and  teachers, who all testimony for the improvements to quality of life that come from schemes such as roof top gardens – which provide comfortable public spaces, reduce heat, reduce CO2, and even can provide local food.

Singapore won the Smart City Expo World Congress Award last year, and is top of the list for money spent on smart city technologies in initiatives of public heath and safety, smart transport, efficient energy and infrastructure. In fact Singapores outstanding reputation for such efforts has it recognised as the worlds first “Smart Nation”.

For a truly imaginative and innovative story – go watch “Gaming the Real World”. This beautiful and wacky film follows three gaming companies, “Minecraft”, “Cities: Skylines” and “Block’hood” as they take on the challenge of real life urban planning! The film touches on the idea of democratisation of city planning, as citizens voice their needs from their urban spaces, and discusses how cities can be better planned to cope with increased growth and energy demand.

The most obvious and immediate question concerning life in green cities would be of course how to provide food for its citizens. Increasingly our methods for food production are also being forced to adapt and become more intelligent under the great demand. Shipping food thousands of kilometres around the world is ineffective, often socially and politically damaging to those further down the supply chain, and has a hugely negative environmental impact.

Many cities are experimenting with alternatives, to provide locally grown food for its citizens from within the city itself. “The Rise of Vertical Farming” is a great documentary on this concept of smart urban agriculture. These techniques make efficient use of small space by placing the field into a third dimension, and growth chambers can control the exact temperature, lighting,  CO2, humidity, nutrients and water supply to plants to allow for a vast away of products to be produced in any location. The doc follows various companies as they navigate the market on a variety of scales as they try and reinvent the model of food production to cities. The film also stands for a great example of activism through entrepreneurship, as many of the companies come from grass roots initiatives of local people wanting to take greater control over the source of their food.

This article was originally published on Films For the Earth, written by Kai Pulfer, and is republished here as part of an editorial partnership with Earth.Org.