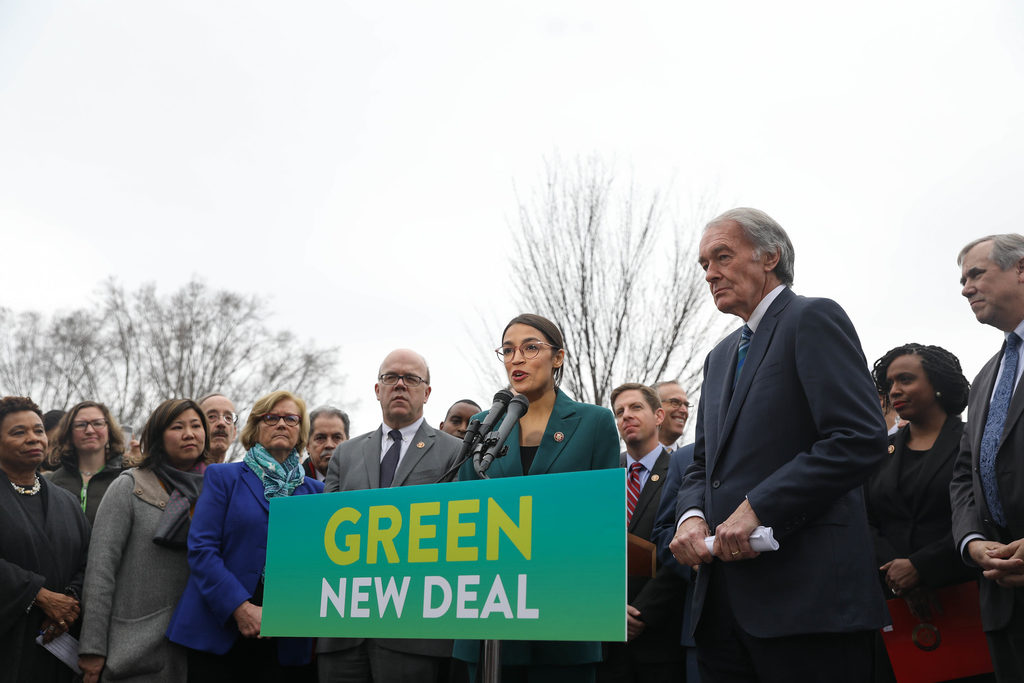 In December 2019, the European Commission presented the ‘European Green Deal’- the EU’s legislative roadmap to carbon neutrality by 2050. With emerging markets continuously expanding fossil fuel capacity and increasing greenhouse gas emissions, one would not be remiss to wonder what the point of this is, especially since the EU is responsible for just under 10% of global emissions. Can its call to using Green Deals as a means of climate action have an impact?

The main aim of the EU’s Green Deal is to turn ‘an urgent challenge into a unique opportunity’ through adopting a series of legal and policy instruments transforming the European economy and society.

Meanwhile, In early 2019, American lawmakers Alexandria Ocasio-Cortez and Ed Markey released the ‘Green New Deal’ proposal in the US Congress with the same goal.

Both proposals are part of an international trend of pushing radically transformative policies aimed at tackling climate change while addressing other economic and social issues.

What is a Green New Deal?

It is a package of legal, economic and policy measures that aims to address climate change and social inequality at the same time, while presenting a new way of thinking about economic growth. According to Ursula von der Leyen, president of the European Commission, “ The old growth is out-of-date and out-of-touch with our planet.”

The climate crisis reinforces inequalities and its adverse effects will primarily affect people of colour, the working class and women, and will ultimately widen the gap between the rich and poor.

The fundamental premise that Green Deals are built upon is that one cannot adequately address climate change or inequality alone but rather, they must be tackled together. Green Deals will, ideally, lead to the creation of sustainable jobs that afford a decent standard of living, less economic inequality, a clean environment, lower energy costs and improved infrastructure that will benefit everyone, not just the rich.

While the EU Commission’s proposal is focused on utilising existing market mechanisms to enable the green transformation, the American Green New Deal essentially calls for an overhaul of existing social and economic systems. The American proposal also tackles areas like education and a jobs guarantee, which would likely be outside the EU’s jurisdiction as it is not a sovereign state.

The Main Points of Each Deal

The EU’s deal contains 50 policy measures, including a carbon border tax for non- EU companies importing energy-intensive goods and a €100 billion ‘just transition fund’ to help member states transition towards a green economy. Under the deal, member states may only enter into trade agreements with states that abide by their Paris Agreement goals.

The deal pledges EU funding and support to make the steel industry carbon neutral by 2030 and the shipping industry will be included in the emissions trading system for the first time.

The deal aims to put the EU’s climate neutrality target by 2050 into law, and it aims to cut greenhouse gas emissions by at least 50% by 2030 compared with 1990 levels. It calls for tougher requirements on cutting emissions from road transport, as well as improving air and water quality and tightening pollution laws. Under the deal, energy efficiency will be increased and renewable energy targets put in place- currently renewable energy is at 17.5% with a target of 20% by 2020. Mass restoration of forests is outlined and there are calls for more organic farming and a cut in pesticides.

Part of the deal is proposed financed through public-private cooperation.

Under this deal, greenhouse gas emissions will be cut in half by 2030 in line with the most ambitious Paris Agreement goals, there will be 100% renewable energy by 2030 (compared to 20% in 2019) and there will be stricter environmental protection provisions in trade deals.

The deals calls for increased investment in research and technology, as well as nature-based solutions, developments for plans to ‘eliminate pollution and greenhouse gas emissions from the agricultural sector as much as is technologically feasible’, for increased investment in improving energy grids, or ‘smart grids’ and for the mass upgrade of all buildings in the country to be ‘as energy efficient, affordable and durable as possible’.

Greenhouse gases associated with transportation will be eliminated ‘as far as possible’ through investing in electric cars and clean, efficient and cheap public transportation, in addition to introducing higher standards and taxes on polluting cars.

Commonalities Between the Green Deals

Both deals recognise that the current economic system is not able to adequately address the climate crisis, that radical new ideas are needed and that the current system disadvantages poor countries and massively benefits the rich. Both deals recognise that environmental provisions in trade agreements must be implemented and made more prominent and that a border adjustment tax must be introduced to avoid carbon leakage.

Additionally, both deals acknowledge the importance of nature-based solutions and that greenhouse gas emissions need to be cut, ideally to a negative percentage by using technology such as carbon capture and storage and renewable energy. Both deals call for a move towards a circular economy and acknowledge that because some areas will be hit hard by these measures, a ‘just transition’ or ‘solitary fund’ is necessary.

The EU’s deal has been called ‘too little, too late’ by Greenpeace. It does not deal with microplastic and it still relies on market-based approaches and the inefficient EU Emissions Trading Scheme.

Meanwhile, the US deal’s goals are too optimistic; opponents argue that carbon neutrality by 2030 is unrealistic and that implementing the deal would be incredibly costly, with estimates ranging from $52-93 trillion.

The American Green New Deal is still being discussed in the House of Representatives but was rejected by the Senate. As for the European plan, a string of legislative and policy measures will be tabled in the coming months for the European Parliament and member states to discuss. In the EU’s legislative process, the member states sitting in the Council have a say, and it is likely that they will be more conservative and less willing to agree to radical proposals.

Unlike the US Democrats’ Green New Deal, the EU’s version is technically feasible. Therefore, it could do much more to pave the way for future environmental gains. If the EU succeeds in its ambitions, it will tell the world that prosperity is not incompatible with climate sustainability.