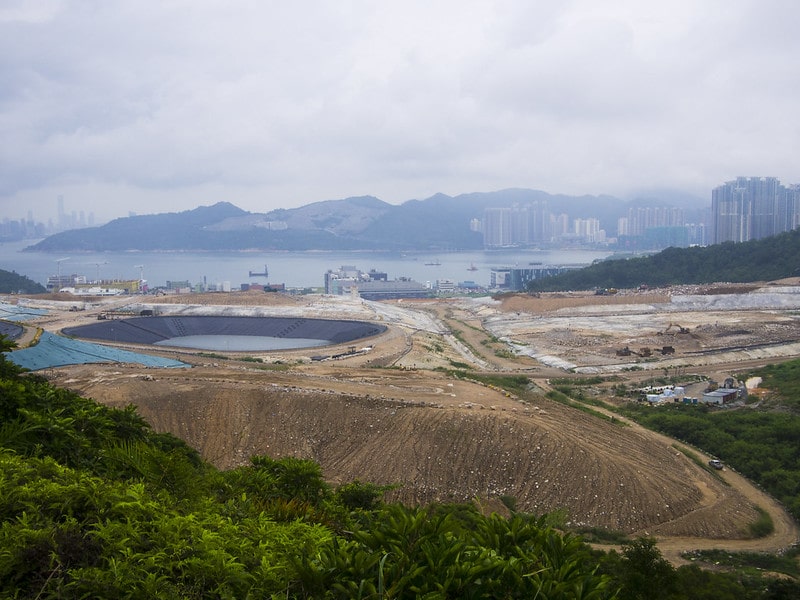 In her 2020 Policy Address, Hong Kong Chief Executive Carrie Lam outlined the city’s carbon neutrality 2050 target. The government recognises that achieving neutrality will require a variety of measures, including expanding local renewable energy, improving energy efficiency in the building sector, promoting low-carbon mobility and improving waste management. This is the third article in a series of articles that takes a closer look at individual elements needed to achieve Hong Kong’s “Carbon Neutrality 2050” target – this time with a focus on improving waste management in Hong Kong.

In Hong Kong, waste was historically seen as something positive that could also be used for reclaiming land. Many of Hong Kong’s skyscrapers stand on reclaimed land, which was obtained amongst other things by using household and construction waste as fill material. Today, however, all actors involved see the problems of the large amounts of waste that are produced in Hong Kong every day. The most common way to dispose of waste in Hong Kong, its landfills, are expected to be filled in a few years, despite expansion measures underway. Alternative solutions are urgently needed. The way waste is handled can have an impact on climate change in various ways. For example, when organic waste decomposes in landfills, carbon dioxide and methane are released into the atmosphere. Disposal of single-use plastic is another big contributor, as its production is carbon-intensive at every step of its lifecycle. Seven years ago, the Hong Kong Environment Bureau released its “Blueprint for Sustainable Use of Resources,” which laid out the situation and set respective waste reduction targets for the amount of daily municipal solid waste (MSW) to fall below 0.8kg per person by 2022. Today, this target seems virtually unattainable. In 2019, Hong Kong stood at 1.47kg per person, an increase of 11% compared to 2013, when the blueprint was published. Clearly, a holistic approach – including the resubmission of a draft for the waste disposal charge – is needed to tackle the waste problem in Hong Kong. This article will focus on highlighting possible short- to medium-term solutions that could help alleviate the waste problem and support the fight against climate change at the same time. Before we focus on the different approaches, it is important to take a closer look at important aspects of the status quo:

Since the 1980s, about half of the world’s recyclable plastics, paper and scrap metals had been absorbed by China. However, in 2018, China imposed a ban on the import of certain types of waste, and as of January 1st  2021, a general ban on the import of foreign waste was enacted. Despite the fact that permits to import certain waste materials are still being issued and other materials are being reclassified, China’s ban has increased pressure on governments to roll out their own recycling plans and push their people towards a circular economy through limiting waste and pollution by keeping resources in circulation for a longer period. Many countries are now building up their own waste disposal industry chain – especially for plastics. In Hong Kong, there is clearly a need to develop a more extensive recycling chain and comprehensive circular economy measures.

Between 1967 and 1997, Hong Kong had four waste incinerators in operation. Given the scarcity of land, this would seem to be a favourable method to deal with waste in Hong Kong. However, due to environmental concerns and negative impacts on the local air quality, all plants were gradually shut down between 1991 and 1997. In the meantime, however, the technology has developed and improved considerably, can be used to produce electricity, and even carbon capture technology is piloted to further reduce the impact on the climate. Hong Kong has therefore commissioned a new waste incineration plant with a capacity to absorb 3 000 tonnes of waste per day – scheduled to come into operation in 2025.

In Hong Kong, 15 637 tonnes of waste are dumped into the three existing landfills per day. 25% of this is construction waste and 71% is so-called municipal solid waste (MSW). The remaining 4% of the waste is special waste. MSW, which is made up of domestic as well as commercial and industrial waste, is the “typical” waste. The top three components of MSW are food waste (30%), paper (24%) and plastics (21%). Of the municipal solid waste, 29% is recovered for recycling – so the actual total amount of waste produced is quite a bit larger than the 15 637 tonnes per day. Out of the recycled materials, metals (54%) and paper (32%) make up the vast majority, while plastics and food waste account for only 5% and 3% of Hong Kong’s recycled materials respectively.

While food waste (30%) and plastics (21%) account for more than half of municipal solid waste, they play only a very minor role in recycled materials with 3% (food waste) and 5% (plastics) respectively. At the same time, their climate impact is substantial. Therefore, two possible solutions addressing these areas are proposed below:

A look at Hong Kong’s recycling statistics reveals something astonishing: while most of the recycled paper or metal is exported for further recycling, of the 77 100 tonnes of plastic recycled annually, 74 400 tonnes (around 200 tonnes per day) are recycled locally – for example at EcoPark, a waste-sourcing industrial business park sponsored by the Hong Kong government. This shows that a waste disposal industry chain already exists, albeit it only recycles a small part of the total plastic waste. As mentioned above, the total amount of plastic waste generated is much higher. For plastic recycling to be successful, the right kind of plastic is needed. If we add up the proportion of plastic bags, PET bottles and non-PET bottles within the MSW, we arrive at a total of 959 tonnes per day (equivalent to 8.7% of the total MSW) of easily recyclable plastics. Thus, the amount of plastics recycled could be increased by about five times compared to today’s levels and by doing so could save huge amounts of CO2 by reducing the need for newly produced plastics. In terms of short- to medium-term solutions, the expansion of the existing and well-functioning plastic recycling infrastructure on site in Hong Kong would be a promising step.

The second big chunk of waste, which accounts for a large share of the total MSW, but represents only a very small part of the recycled material, is food waste. Hong Kong can count on existing and well-functioning infrastructure in this area, too: OPARK, an organic waste recovery centre in operation since 2018, is capable of handling over 200 tonnes of food waste each day and converting it into biogas, which can then be used for generating electricity. However, according to waste statistics, a total of 3 656 tonnes of food waste are still transferred into Hong Kong’s landfills each day. The potential for additional organic waste recovery centres is recognised and there are plans for an OPARK-2, which will be able to manage up to 300 tonnes of waste each day and is scheduled to open in 2022. However, even with OPARK-2, well over 3000 tonnes of food waste per day will still be going into landfills. A rapid expansion of the organic waste recovery and management infrastructure in Hong Kong can help to prevent large amounts of food waste – and with it the release of carbon dioxide and methane gas – from ending up in landfills. Additionally, recovering more food waste and turning it into biogas would help to increase the production of local renewable energy. Assuming Hong Kong expands its food waste recycling infrastructure to handle the entire 3 656 tonnes produced daily, this would generate up to 256 GWh of local renewable energy per year, which is equivalent to the yearly power consumption by some 55 000 households. A win-win situation!

So what would this mean for Hong Kong? In order to embed these two possible solutions into the overall situation, this article concludes with a small calculation. The current total amount of municipal solid waste of 11 057 tonnes being discharged into the already nearly exhausted landfills every day can be reduced by 3 000 tonnes per day through the planned waste incineration plant. The major expansion of plastic recycling infrastructure as well as organic waste recovery centres could reduce this amount by 4 615 tonnes per day (959 tonnes of plastic per day + 3 656 tonnes of food waste per day). This results in a residual of 3 442 tonnes per day, a whopping 69% reduction compared to the status quo. At the same time, this also shows that there is no way around waste reduction. The road to a circular economy is still long, but it is absolutely necessary for Hong Kong to get a grip on its waste problem and contribute to achieving its climate goals.