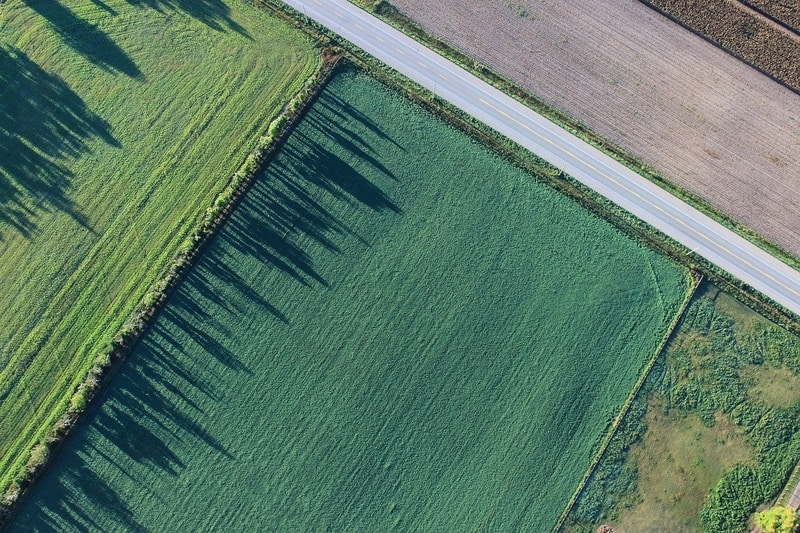 What changes has human activity caused to the Earth’s land surface? Farming is a major cause of climate change and biodiversity loss, with species abundance having fallen by over 20% globally since 1900. Diversity within agriculture fares no better, as the United Nations’ Food and Agriculture Organization (FAO) reports that just 9 species of plant account for 66% of global crop production. Meanwhile, increasing numbers of local food crops are heading towards extinction, being replaced by more marketable staples such as wheat, rice and maize. The scale of agriculture’s impact can be attributed to humanity’s influence on land surface changes: more than 70% of Earth’s land surface and two-thirds of marine environments have been significantly altered by human activity. Arable lands and grazing pastures cover one-third of Earth’s land surfaces and consume three-quarters of the world’s limited freshwater resources. 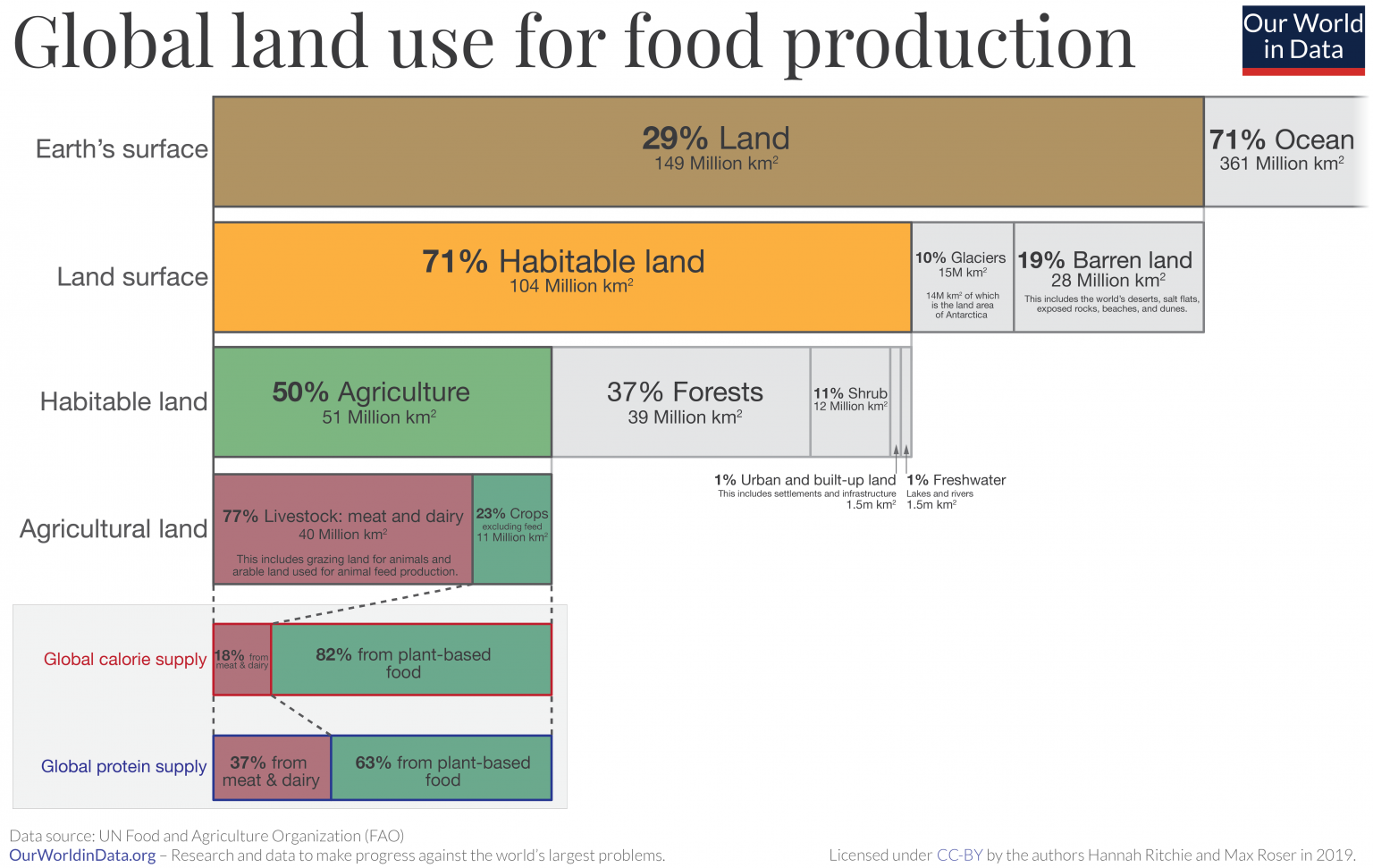 Habitat loss and fragmentation are the primary threats to 85% of the species on the IUCN’s Red List of threatened and endangered species. Agriculture is a major driver of this as large swathes of highly productive areas such as forest, meadow and wetland habitats are cleared to make way for fields and grazing land. The homogeneity of agricultural ecosystems (i.e. low variety of plant species and supported wildlife) caused by crop monocultures encourages low genetic biodiversity, dominance of pest species and a greater susceptibility of crops to disease. In places such as the USA, 75% of processed foods in supermarkets contain genetically modified ingredients, including 92% of maize and 94% of soybean products. These crops are cloned, such that a single disease or pest could wipe out the entire field. The resulting fragile agroecosystem fuels a reliance on pesticides, herbicides and fertilisers to promote crop growth and prevent damage.

More than 68 billion tonnes of top-soil is eroded every year at a rate 100 times faster than it can naturally be replenished. Laden with biocides and fertiliser, the soil ends up in waterways where it contaminates drinking water and protected areas downstream. Water treatment and healthcare-associated costs alone cost US taxpayers billions a year. Furthermore, exposed and lifeless soil is more vulnerable to wind and water erosion due to lack of root and mycelium systems that hold it together. Healthy soil is rich in humus, which holds more water, and decreases erosion through increased soil density and particle clumping. A key contributor to soil erosion is over-tilling: although it increases productivity in the short-term by mixing in surface nutrients (e.g. fertiliser), tilling is physically destructive to the soil’s structure and in the long-term leads to soil compaction, loss of fertility and surface crust formation that worsens topsoil erosion.

Biocides are becoming less effective as pests develop resistance, prompting the development of increasingly deadly formulae. As policymakers ban a growing number of chemicals due to their detrimental effects on health, agriculture will need to turn to natural pest management alternatives. Biocides rarely distinguish between target species and beneficial invertebrates such as earthworms. Important ecosystem engineers that physically alter and regulate their environment, earthworms are vulnerable to pesticides through direct contact or ingestion, with even sublethal doses causing impairment or altered activity. They are also highly sensitive to soil pH which is lowered by the topical application of nitrogen-rich fertiliser.

Conventional farming not only affects the land it occupies, but its effects are carried by the wind as aerosol particles, and by water runoff into oceans and reservoirs. The fumes from fertilizers and vehicle exhausts combine in the atmosphere to create toxic compounds, leading to respiratory issues in humans and animals, as well as dissolving into acid rain which damages forests and agricultural land, and pollutes waterways. Furthermore, excess nitrogen fertiliser cannot be taken up by the soil and runs off into bodies of water causing eutrophication and hypoxia. Eutrophication refers to the over-enrichment of water with nutrients that leads to massive algal blooms, blocking out sunlight and depleting the dissolved oxygen. This leads to low oxygen levels known as hypoxia, resulting in mass die-offs or migration of species from the affected area creating an oceanic desert. The Gulf of Mexico’s annual summer “dead zone”, which becomes so polluted that no marine life can thrive, is an extreme example of the consequences of fertiliser overuse. The Mississippi River runs through 31 U.S. states with high agricultural and industrial activity before emptying into the Gulf. This year the dead-zone is forecasted to reach 10 700 sq km, about 2 000 sq km larger than the long-term average. This trend is especially worrying because coastal waters are some of the most productive in the ocean, supporting coral reefs as well as economically important fishing and leisure industries. 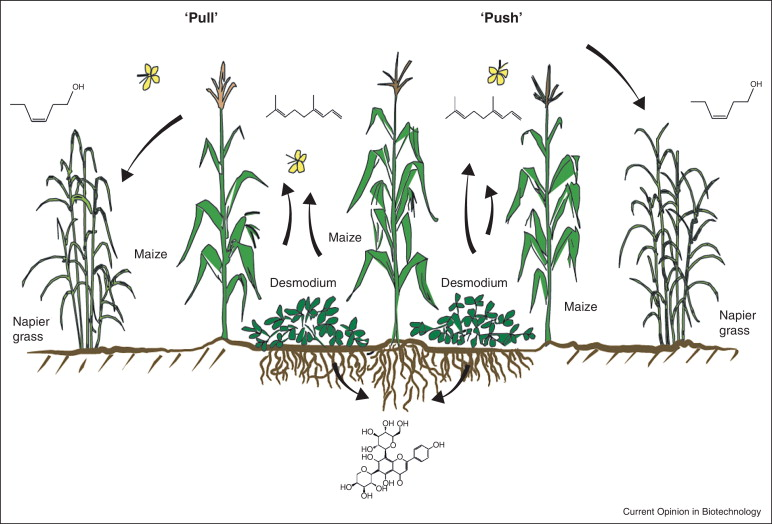 Reintegrating Nature into the Countryside

There are already many solutions to these environmental issues, yet they are not being implemented on the scale that is required to halt biodiversity loss. A simple way of reintegrating nature into arable land is the creation of wild zones and hedgerows on the margins of fields, or other unused spaces. Not only would these small pockets of unmanaged land provide valuable habitats for native plants and animals, they would reconnect fragmented habitats, allowing larger ranges for populations and promoting genetic diversity. These wildlife corridors are particularly important for non-flying migratory species, and to help mitigate local extinctions as habitat ranges shift towards higher latitudes as a result of the climate crisis.

No-till or reduced-till farming is a re-emerging technique that seeks to minimise soil disturbance and promote healthy soil ecosystems. No-till often includes planting perennial plants that retain their roots for more than one growing season. Perennials have stronger and deeper roots than annual crops, reducing soil compaction and improving aeration. These roots also provide a steady supply of soil nutrients in the form of liquid exudates to support a healthy community of microbes and macro-organisms. No-till is often combined with cover cropping to protect against erosion and improve soil health. The cover crop’s roots bind the soil in place and offer physical protection from wind and water erosion, while adding plant diversity in monoculture cropland. Some cover crops also create habitats for natural pollinators, whose presence increases crop yield and shortens the growing season. The most popular types of cover crops are grasses and legumes that scavenge nitrogen and carbon from the soil as well as sequester it from the atmosphere, add fertile humus to the soil as they break down, and provide weed control.

Biological pest control and biopesticides are two natural alternatives to conventional biocides that can also be used in conjunction with cover crops. In natural systems, pests rarely cause problems because the complex web of predator-prey interactions, competition and genetic diversity keeps the ecosystem in balance. Recreating these relationships through either the introduction or augmentation of existing predator or parasite populations is a form of biocontrol that protects crops while reducing the need for synthetic pesticides. Another technique, known as “Push-Pull”, involves planting repellent plants between crop rows to discourage pest colonisation, while establishing “pull” plants that are more attractive to the pest than the crop around the perimeter of the field. This draws pests away from the centre of the field and towards margins where predator populations are more strongly established. As a natural alternative to pesticides, biopesticides work in a multitude of ways, some imitating biochemical signals, while others introduce fungal, viral or bacterial diseases that infect the pest.

Green manure, or mulch, is dead plant matter that is spread over a field and left to decompose. Legumes, such as vetch and clover, make especially great manure as they store carbon and nitrogen in their roots as they grow, creating high quality natural fertiliser. Unlike conventional nitrogen fertilisers that saturate the soil to achieve maximal yield, green manure releases nitrogen into the soil gradually thus preventing run-off, with major beneficial consequences for water quality. Green manure often comes from cover crops that are planted in the field and then either cut or left to wilt in place. They provide ground cover while alive, and return nutrients upon decomposition, mimicking naturally-evolved ecosystems.

Just like in nature, the effects of individual sustainable practices overlap and integrate with each other to forge a cohesive whole. The tools and strategies for building healthy agricultural systems able to feed over 8 billion humans while preserving the environment already exist; it is simply a case of rediscovering what past agriculturalists and indigenous peoples already knew: that nature will provide on condition we work with it, not against it, and that we give back as much as we take. Moreover, investing in the study of ecosystem interactions will lead to healthier, more productive soils and a decreased reliance on toxic fertilisers and biocides. This will have overwhelmingly positive consequences for global food security, nutrition and health, as well as for the reduction of environmental damage and pollution.