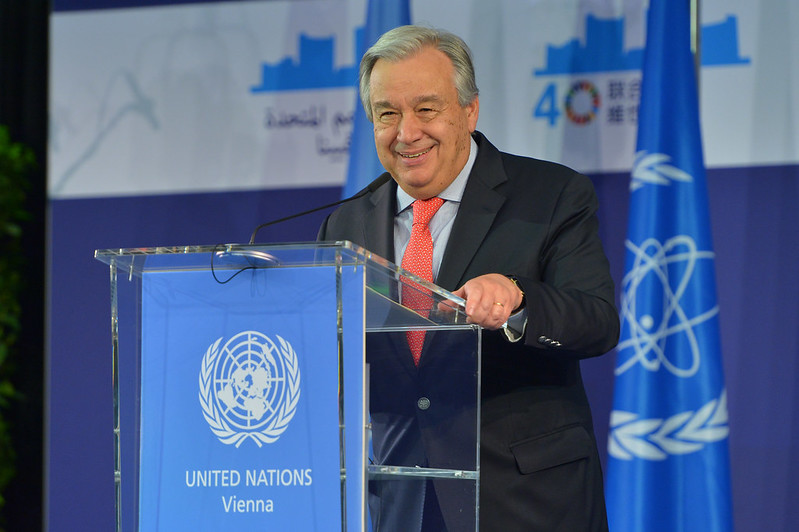 Antonio Guterres, UN Secretary General, issued a stark warning at a virtual address this week, saying that humanity is “waging war with nature,” which will destroy our future if we don’t take immediate action.

In a virtual address entitled “The State of the Planet,” at Columbia University in New York, Guterres said, “Humanity is waging war on nature. This is suicidal. Nature always strikes back – and it is already doing so with growing force and fury. Biodiversity is collapsing. One million species are at risk of extinction. Ecosystems are disappearing before our eyes … Human activities are at the root of our descent toward chaos. But that means human action can help to solve it.”

He called making peace with nature the “defining task of the 21st century” and said that failure to do so would mean that future generations would face the consequences of our actions today: “This is an epic policy test. But ultimately this is a moral test … We cannot use [our] resources to lock in policies that burden [future generations] with a mountain of debt on a broken planet.”

Greenhouse gas emissions are 62% higher than when international climate negotiations began in 1990. This year is expected to be one of the three warmest years on record globally, despite the cooling effects of the La Niña weather system. Further, greenhouse gases have reached record levels despite COVID-19 lockdowns, according to the UN’s World Meteorological Organization (WMO).

However, he pointed to many countries, including China, the EU and the US, setting targets to achieve carbon neutrality around the middle of the century. Renewable energy is also now cheaper than coal in many regions. Guterres said, “I firmly believe that 2021 can be a new kind of leap year – the year of a quantum leap towards carbon neutrality. Sound economic analysis is our ally.”

However, he urged investors and governments to turn attention towards actions that will make these pledges a reality, saying that they themselves are not enough:  “We need all governments to translate these pledges into policies, plans and targets with specific timelines. This will provide certainty and confidence for businesses and the financial sector to invest for net zero.”

Guterres called for countries to put a price on carbon emissions, stop investing in fossil fuels and phase out fossil fuel subsidies, stop building new coal power plants, and to shift their fiscal base from taxing incomes to taxing pollution.

Next week, world leaders will meet at the Climate Ambition Summit to prepare for the COP26 talks that were postponed by a year to next November because of the pandemic. Here, governments are expected to affirm plans to reduce greenhouse gas emissions drastically in the next decade, in line with their long-term goals.