In Saving the O Zone Layer, We Avoided Even More Intense Global Warming 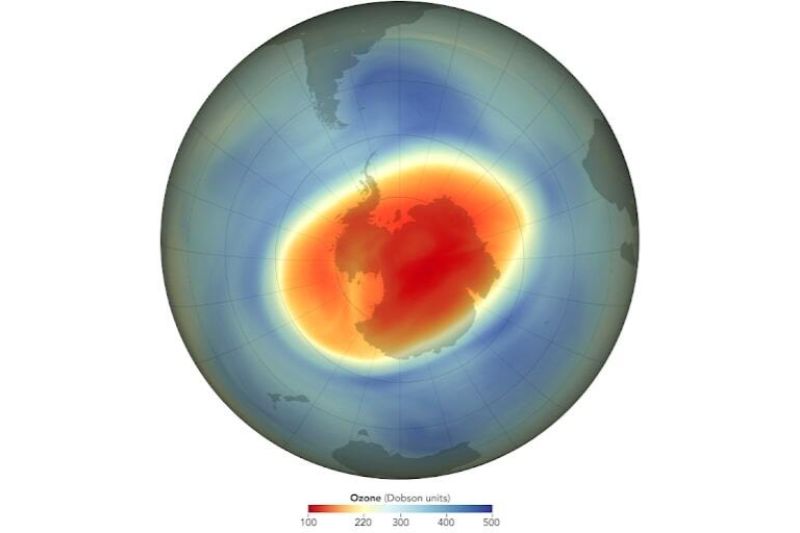 The Montreal Protocol, a 1987 agreement to stop using o zone-depleting chemicals, also helped combat climate change in more ways than one, a study published in Nature found. The group of synthetic gases called chlorofluorocarbons (CFCs) that deplete atmospheric o zone are also potent greenhouse gases, so phasing them out has protected the planet from warming above and beyond what we’re seeing today. The protocol’s success shows that collective action taken in time can make a difference in tackling global environmental challenges.

As bad as the climate crisis now unfolding appears to be, things could have been even worse, with the world a much less hospitable place for human life. What has kept things from getting that bad, a new study suggests, is a rare moment of collective action when the world came together to do right by the planet: the Montreal Protocol.

Signed in 1987, the Montreal Protocol is best known as the agreement that got the world to stop using chemicals that deplete the o zone layer, the thin shield that keeps out the most harmful ultraviolet rays. But besides averting perhaps millions of excess deaths from skin cancer, the protocol has helped combat climate change by keeping global warming in check, the study published in Nature found.

The main culprits that damage the planet’s o zone layer, chlorofluorocarbons (CFCs), are also potent greenhouse gases. Starting in the 1960s, CFCs came into widespread use in refrigeration and air-conditioning.

Without the Montreal Protocol to get rid of these gases, the intensified UV radiation would have damaged plants and reduced their capacity to absorb carbon dioxide by as much as 690 billion metric tons by the end of this century, according to the analysis. In the grimmest scenario, that would mean an additional 1 degrees Celsius of warming.

Sunlight is building block of life, but too much radiation is dangerous for life on Earth. Overexposure to it can cause health problems in humans from sunburns to more severe conditions like cataracts and cancers. Plants that are exposed continuously to sunlight can wither and die. The carbon cycle would look a lot different in such a situation: Plants that suffer damage from UV radiation would be a lot less effective at stashing carbon.

Ozone is found in the stratosphere, 15-35 kilometers above the Earth’s surface. It’s a highly unstable gas molecule made up of three oxygen atoms. With the sun’s radiation acting on them, CFCs break down into compounds containing chlorine. This chlorine binds with the oxygen atoms in ozone, destroying it.

The ozone hole isn’t really a hole; it refers to patches of the atmosphere where ozone concentration is low. This allows too much harmful UV radiation that would otherwise be reflected back into space to pass right through.

The dangerous thinning of the layer, especially over the Antarctic, where climatic conditions also favor ozone destruction, sparked alarm in the mid-1980s. The hole changes in size throughout the year, and is the widest in August and September.

In 1984, climatologists found that the ozone layer above the Antarctic had slimmed to two-thirds of its thickness. This was shocking but not altogether unexpected. Scientists had been warning about the hazards of human-made CFCs for more than a decade before countries came together to sign the Montreal Protocol in 1987.

The protocol is to the ozone hole what environmentalists hope the Paris Agreement will be to climate change. All U.N. member states ratified the protocol, agreeing to binding, time-bound and measurable targets.

It limited the use of almost 100 synthetic chemicals that could destroy atmospheric ozone, banning some and requiring others to be phased out.

And it appears to be working.

Three decades after the protocol came into effect in 1989, the ozone shield is on its way to recovery. Some estimates suggest it could be back to pre-1980 levels as early as 2060.

These actions did not happen all at once; there was a gradual phasing-out of CFCs. These were progressively replaced by hydrochlorofluorocarbons (HCFCs). HCFCs are less destructive to ozone but still cause warming.

A newer generation of substances called hydrofluorocarbons (HFCs), which don’t contain chlorine and hence don’t impinge on the ozone layer, came next. However, HFCs still cause warming, so the Kigali Amendment to the Montreal Protocol, which came into effect in 2019, sought to curb their use, seeking a reduction of 80% by 2047.

Even then, many of these substances persist in the atmosphere and the actual impact on ozone levels is visible only decades down the line.

“Overall, using ozone depletion to explore the effects of delay or dilution of a global policy response to a global environmental challenge may have relevance well beyond the Montreal Protocol,” the authors write.

A recent IPCC report says the planet has already warmed by about 1.1C since the 19th century. It warns that more warming is inevitable in the next 30 years. The experience with the Montreal Protocol shows that things can still change post-2050.