IPCC Report May Be A “Code Red for Humanity,” But We Still Have Choices to Make On Monday, August 9, the Intergovernmental Panel on Climate Change (IPCC) released the first section of its three-part Sixth Assessment Report, with the rest to be published in 2022. The recently released report, titled The Physical Science Basis of Climate Change, incorporates the most up to date understanding of the climate system and how it is changing. One of the most significant findings from the report details how global temperatures will very likely rise 1.5°C above pre-industrial levels by 2040.

If there was one word that could sum up the latest report of the IPCC, widely considered the most reliable and factual source of scientific information on climate change, it might be unequivocal. In a summer marked by obliterating wildfires and devastating floods, there can no longer be any doubt that climate change is not only happening, but accelerating. And humans are the cause.

We arguably should have come to this conclusion years ago, but here we are. In the summer of 2021, on the eve of potentially pivotal climate talks at COP 26 later this year, climate change has become a sobering and unequivocal reality that is no longer a far-off threat, it is here. And if nothing is done now, it will get even worse.

Before going into the findings of the report, it is important to remember what the IPCC is: an intergovernmental body dedicated to uncovering and understanding the purely scientific underpinnings of anthropogenic climate change. The IPCC is not a political entity, and it is policy-neutral. It does not recommend, advocate or negate any specific policy action. With its reports, the IPCC acts as a multilateral assessment body, evaluating the latest evidence and publicising its findings for policymakers. And the findings this time around are less than ideal.

What are the Main Takeaways from the IPCC Report?

The consensus presented in this week’s report is that it is too late to avoid at least some changes to Earth’s climate system, and atmospheric carbon dioxide levels in 2019 reached concentrations higher than at any time in at least 2 million years.

The impact this has had on global average temperatures is staring us in the face, as the report finds that the past 50 years have seen the fastest temperature increases in at least 2,000 years. The last decade may well have been the hottest the planet has been in at least 125,000 years. This much atmospheric CO2 means that a certain threshold of damaging temperature rise will be impossible to avoid before radical changes to the biosphere occur. Warmer temperatures are also impacting glaciers worldwide, which are melting and receding at a pace that has not been seen in at least 2,000 years.

The panel reports on some certainties, and these changes are now essentially locked in. The report estimates that we are now facing at least 20 years of warming temperatures and worsening climate change impacts, accompanied by global temperatures that will very likely rise 1.5°C above pre-industrial levels by 2040 at the latest, followed by at least a decade of further warming. 1.5°C temperature rise could happen as early as 2030-2035.

The IPCC released a special report in 2018 detailing the implications of surpassing the 1.5°C threshold, which is generally seen as the point in which the impacts of global temperature rise will go from destructive to devastating. With warming of more than 1.5°C, sea levels could rise by over 10cm, up to 99% of coral reefs would decline and nearly 1 billion people might be facing deadly heat waves at least once every five years.

What Could Still Happen with Climate Change?

These changes are very close to becoming unavoidable right now, but from there, multiple potential futures emerge. We still have choices to make, and if we make the right ones, we increase our chances of avoiding the worst effects of climate change.

The estimates for global temperature increase by 2100 range between 1.3°C and 5.7°C, although the most likely range spans from 1.4°C to 4.4.°C. Some areas of the world, such as the Arctic, will experience much higher temperature fluctuations than others. In scenarios under which we do not rapidly draw down emissions, sea levels rises could go up anywhere between a foot and a half to seven feet by 2100, and the panel refuses to rule out 16 feet of rise by 2150. 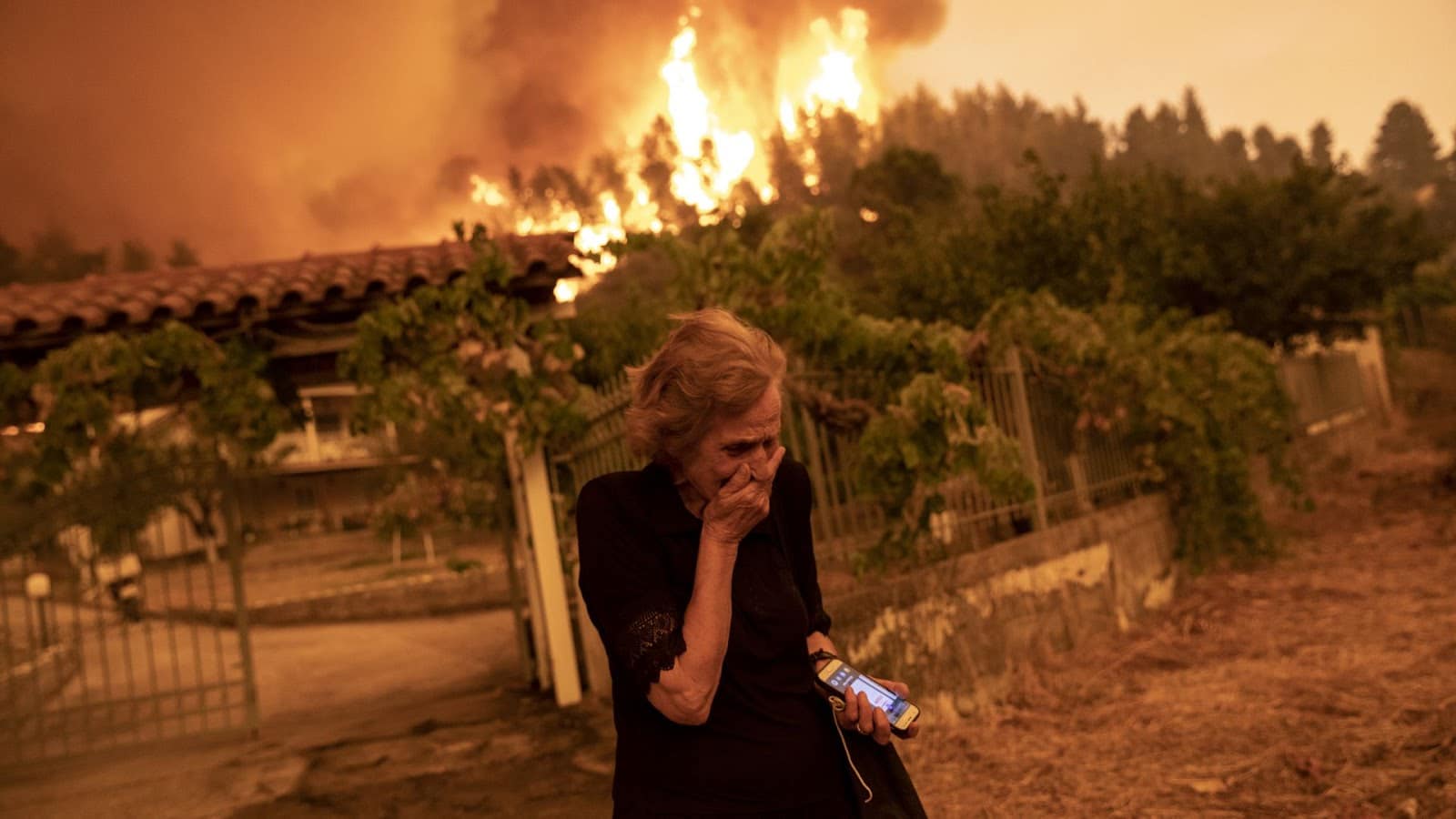 A woman reacts as a wildfire approaches her house in Evia, a Greek Island, in August 2021. Southern Europe is the latest victim of 2021’s wildfire season. Photo: Konstantinos Tsakalidis/Bloomberg via Getty Images.

A world with average temperatures higher than 3 or 4°C above pre-industrial levels would be truly horrific and unrecognisable to anyone alive today. But fortunately, the tools to avoid these nightmare scenarios not only exist, they are in our hands.

To avoid rapid and accelerated temperature rise, we need to change the ways the world moves around, generates electricity, grows food and powers our homes. We need to shift to renewable energy sources, stop destroying our forests and natural carbon sinks, electrify everything we can and find creative solutions for what we cannot. From a technological standpoint, none of this is impossible or futuristic. Politically, however, it is a different matter.

We Can Choose Our Future

Without more ambitious commitments to rapidly reduce emissions, the world’s highest emitting countries like the US, China, Europe and India will make progress difficult. Some, like the EU and the UK, have created more forceful and legally binding targets for themselves, but others remain far behind. China, for instance, the highest emitter right now responsible for 30% of global greenhouse gas emissions, does not expect its emissions to peak before 2030.

Avoiding the worst impacts of climate change outlined in the report will require coordinated action to draw down current levels of emissions, and probably manually remove carbon from the atmosphere as well. If we can do this, and reach a balancing point of net-zero emissions by 2050, then we stand a good chance of leveling off temperature rise at or slightly above 1.5°C. If we are unable to get more countries on board, then temperatures will continue to rise, and we will inevitably cross one of the catastrophic climate ‘tipping points’ that will create runaway circumstances virtually impossible to recover from, such as the collapse of Antarctic ice sheets or the death of the Amazon rainforest.

The report stresses that, even in a low-emissions scenario, we will very probably be at 1.5°C above pre-industrial levels for some time. This will be devastating worldwide, but it is especially tragic news for several low-lying island nations, such as Kiribati and the Marshall Islands, which face the threat of their homelands quickly becoming uninhabitable. This means we need to be prepared, because as bad and unequivocal as things are now, they might just be the beginning. “Things are unfortunately likely to get worse than they are today,” says Peter Forster, a climate scientist who contributed to the report.

Reactions to the report among those who expected it were mostly unanimous: a sense of urgency, but not necessarily of surprise:

“The new IPCC report contains no real surprises. It confirms what we already know from thousands previous studies and reports – that we are in an emergency,” tweeted climate activist Greta Thunberg. “We can’t wait to tackle the climate crisis. The signs are unmistakable. The science is undeniable. And the cost of inaction keeps mounting,” said US President Joe Biden. “Today, I, and so many other young people, wake up enraged – the IPCC report is apocalyptic, catastrophic, and nothing we haven’t been screaming from the rooftops for years. Our politicians shouldn’t need a report to tell them how bad things are. We’re already living it,” said Varshini Prakash, director of the activist Sunrise Movement.

This is why the upcoming climate summit in Glasgow in November is so important. With current climate pledges and emission rates, we are on track to experience around 3°C of temperature rise by the end of the century. The report tells us that we have time and opportunity to improve and to bring this number down, but that window is shrinking, and faster than we were expecting.