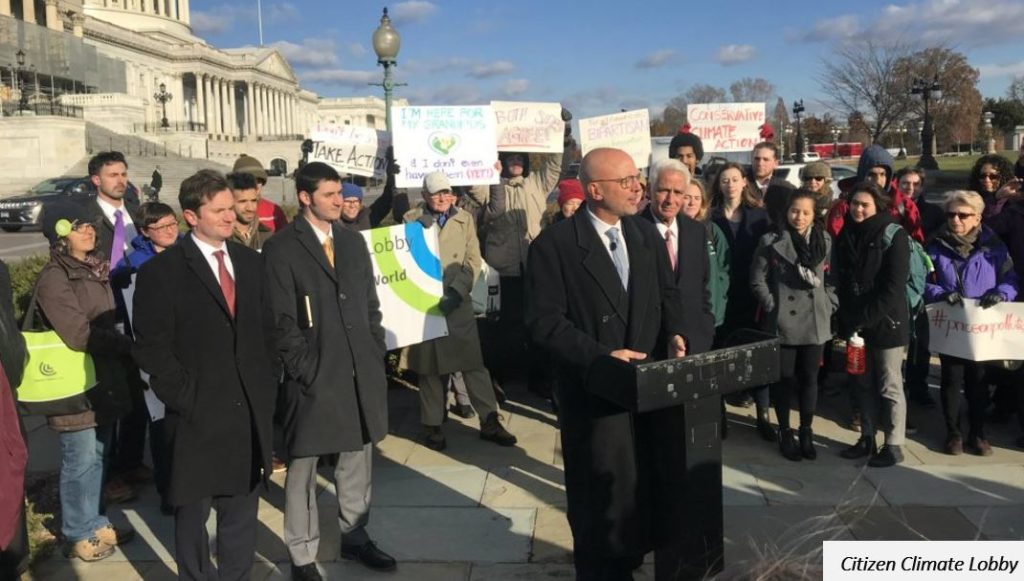 Two Republicans and three Democrats announced the Energy Innovation and Carbon Dividend Act in late November, the first bipartisan climate legislation in a decade, representing a US landmark carbon tax. The move is an attempt to “plant a flag” for climate change efforts in January, when Democrats take control of the House for the first time since 2010.

“More than a dozen federal agencies just warned us that if we don’t take dramatic action, climate change will knock 10% off our GDP by the end of this century”, Republican Ted Deutch said in a statement to Bloomberg Environment.

“Putting a price on carbon can help change the behaviour of polluters. We hope our bipartisan bill will spur action on climate change before it’s too late.”

The United States is second-largest emitter of carbon dioxide, behind China.

Should the US implement a carbon tax?

All of the net revenues would be rebated as a monthly carbon dividend to households, to offset the increased fossil fuel costs like higher utility and gas bills.

Until certain targets are reached, the price would increase by $10 per metric ton per year. Lawmakers project the tax will lead to dramatic cuts in greenhouse gas emissions: a one-third cut over the next decade and 90% emissions cut by 2050, compared to 2015 levels.

The bill has since garnered support from one Republican and two Democratic co-sponsors.

Some environmental groups are also backing the bill. “This is the kind of smart, bipartisan proposal on climate change that we urgently need,” said Andrew Steer, president of the World Resources Institute.

But critics claim the carbon tax will not yield the dramatic reductions necessary to fight climate change.

“Carbon pricing schemes like this one are false solutions to climate change, and they provide a dangerous distraction from the bold policies required to avoid the worst effects of climate chaos in decades to come,” said Wenonah Hauter, executive director of Food and Water Watch. “This carbon tax bill amounts to climate denial, not climate action.”

The sentiment is echoed among some hard-left Democrats.

On November 13, three days after the carbon tax proposal, a group of 10 current and incoming House Democrats, led by U.S. Rep. Alexandria Ocasio-Cortez (D-NY), held a rally in support of climate legislation.

But they did not bring up the bipartisan climate tax, let alone welcome it.

Instead, they pushed for a Green New Deal, mandating the committee produce legislation that achieves “100% of national power generation from renewable sources” in a period “no longer than 10 years” through “massive investment”.

While the Energy Innovation and Carbon Dividend Act is revenue-neutral, progressive activists want a revenue-raising carbon tax, arguing that the revenue is urgently needed for investment in renewable energy, green jobs and aid for impoverished communities.

The political divergence among Democrats is “deeply troubling for the future of the planet”, says political analyst Bill Scher, contributing editor of Politico magazine.

Given that a ballot initiative for a revenue-raising carbon tax fee was rejected by voters in Washington this year – a “decidedly blue state in a decidedly blue election year” – the prospects of the Green New Deal look “bleak”, he says.

“It makes no sense to set up a committee that cuts off debate around other possible approaches that may be more politically feasible, such as the bipartisan Energy Innovation and Carbon Dividend Act”, he argues. “It may only have three Republican sponsors today, but that’s three more than the Green New Deal has.”