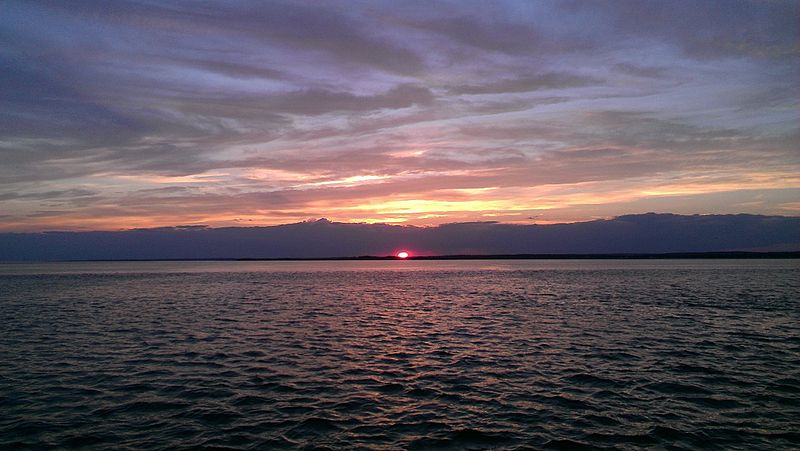 The Long Island Sound is an estuary between New York’s Long Island and the state of Connecticut. It is part of the Atlantic Intracoastal Waterway linking the Atlantic Ocean, New York City Harbor, and points in between. The Sound is one of the most heavily populated bodies of water in North America, and it plays a critical ecological role as a nursery for a diverse list of marine species, while also being an important shellfish fishery and recreational area. Over time, human population density, pollution and land-based commercial activity has had a negative impact on the water quality of the Long Island Sound, a unique and important body of water.

The Long Island Sound is approximately 160 kms long (east to west) and 33 kms across at its widest point, covering an area of 3 400 sq km with 965 kms of coastline. Two glacial advances have created places with sea floor depths of over 30 m and tidal ranges of 1-2 m, leading to a wide variety of ecosystems. Given the variation in tidal exchanges, human water use, and diversity of marine life, water quality is the deciding factor in the delicate balance between a thriving environment and one in need of rehabilitation.

According to the Environmental Protection Agency (EPA), the key water quality indicators are: dissolved oxygen, pH, temperature, turbidity, total phosphorus, total nitrogen, and E.coli. The Sound has long had health issues due to wastewater and stormwater runoff introducing an overabundance of nitrogen and other nutrients, leading to algae blooms depleting oxygen levels. Lack of oxygen, also known as hypoxia, has caused aquatic life to leave the area or suffocate. Tracking these leading indicators of environmental health are essential tools for monitoring and remedying issues.

In 1985, the EPA, along with the states of New York and Connecticut, came together to create the Long Island Sound Study (LISS), consisting of federal and state agencies, user groups, concerned organisations and individuals dedicated to restoring, protecting and preserving the Sound’s health and preventing pollution. Over the past 30 years, joint efforts between LISS and the border states have succeeded in reducing the annual nitrogen load by more than 100 million kgs through upgrades to water treatment plants,  restoring 2 056 acres of habitat including tidal wetlands and forest, spearheading investments and programmes resulting in a total conservation impact of more than USD$62 million for regional and local projects that have treated 212 million gallons of stormwater, reconnecting 674 kms of rivers for fish passage and educating and engaging 4.9 million members of the public.

In 2015, LISS’s partners revamped their goals to address ongoing and new challenges, and to ensure continued progress towards a healthier Sound, with four themes and overall goals:

Resiliency based on sound science in the face of climate change was pushed to the forefront during Superstorm Sandy in 2012. Extensive flooding released chemicals and other byproducts of industrialisation into the Sound at unprecedented levels, resulting in a costly and lengthy cleanup. This provided a dramatisation of the future impacts of climate change and demonstrated that urgent action and cooperation is needed on the part of State and Local governments and the public at large, in order to protect this vulnerable habitat.

Complementing the efforts of LISS is Save the Sound, dedicated to taking positive environmental action in the region, fighting climate change, saving endangered lands and working with nature to restore ecosystems. Coordinated efforts towards conservation coupled with increased public education have helped clean the Sound over the last decade, which is encouraging news.

Unfortunately, the open Sound itself, which ultimately feeds the smaller bays, has recently been experiencing higher levels of chlorophyll and dissolved organic carbon, which are typically linked to changes in weather. Given that climate change is occurring worldwide, resulting increased water temperatures combined with repeated, large-scale flooding, will exacerbate existing water quality issues.

As part of their ongoing work, Save the Sound scores water quality in five regions of the Sound and releases The Long Island Sound Report Card every two years. This report tracks and publicises the ecological health of the waterway and is shared with elected officials, government agencies and the general public to promote on-going improvement and foster support for restoration projects and initiatives.

The latest Report Card was released in October 2020, and is available in its entirety here: 2020 Report Card. This was a landmark year, as data was included for multiple inlets, bays and other waterways that may not fully flush during the changing tides. Unfortunately, as in years past, nitrogen remains a major threat to the Sound as a whole, leading to fish die-offs and large seaweed blooms. Importantly, the most recent data shows that water quality in bays and harbours cannot necessarily be predicted by water quality in nearby parts of the open Sound. The variation is directly linked to the amount of tidal exchange the protected areas receive, and highlights the impact that local conditions (and the communities responsible for them), have on the quality or degradation of the water. Of the 50 segments monitored across 38 bays, 56% of them received a “C”, “D”, or “F” grade. Only six received an “A.” This demonstrates the significant impact local communicates can have on these microcosms of the Sound at large, either positive or negative.

Everyone can play a part in protecting not only the Long Island Sound from pollution, but local waterways wherever you live. Save the Sound suggests the following:

It’s critical that pollution and other threats to a healthy marine ecosystem remain in the crosshairs of conservation efforts to protect the progress made to date and preserve the Long Island Sound for future generations. The vision of the LISS, Save the Sound and the people who call this area home is of clean, clear and safe waters that support an abundance of healthy, sustainable marine life. With concerted and consistent effort, this vision can be realised.