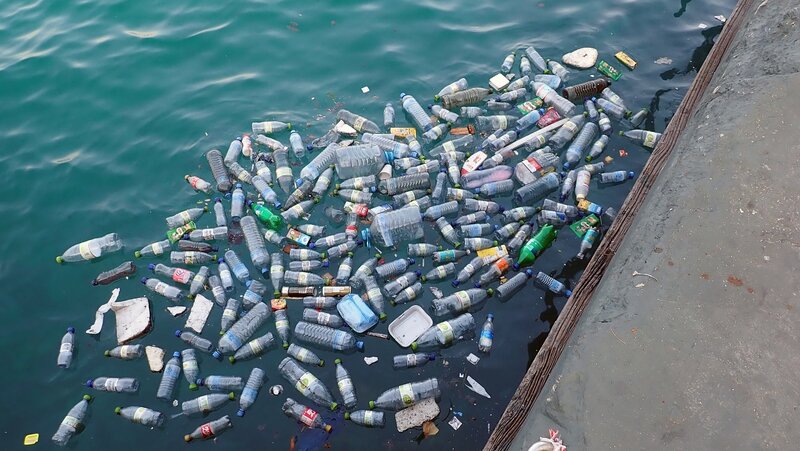 New research has found that pollution from plastic waste dumped into the world’s oceans is correlated with ocean acidification, which occurs when the water’s chemistry is altered as CO2 is absorbed by seawater. This process reduces water PH levels and vital minerals like calcium carbonate, a key building block for many marine skeletons and shells. Increased ocean acidity is also caused by CO2 emissions being absorbed into the sea. Ocean acidity has increased by 26% since 1850, 10 times faster than any period within the last 55 million years.

The study describes how after three weeks of leaving discarded water bottles in the sea, the bottles became sources of harmful bacteria and microorganisms. The accumulating bacteria that spread on plastic and into the ocean are now referred to as the ‘plastisphere’.  Bacteria that damage marine ecosystems are being discovered more often, for example the Photobacterium rosenbergii, which has been linked to coral bleaching. Also, the Vibrio parahaemolyticus bacteria has been found in marine plastic within the North and Baltic sea, which can pass cholera to humans. The study found that the bacteria found on single-use plastic bottles were twice as bacterially diverse in comparison to samples from surrounding seawater.

The study was conducted off the coast of Japan’s Shikine Island, known for its natural presence of underwater CO2 seep vents. Using a combination of statistical analysis and DNA sequencing, the team was able to discern that an increase of CO2 will further accelerate bacterial distribution. The research also showed that 350 groups of bacteria examined were found to be unique to plastics only. In areas higher in Co2, it was found that many taxonomic groups were affected, including vital bacteria that play an important role in carbon cycling.

300 million tons of plastic is produced every year, 50% of this for single-use purposes. Everyday, approximately 8 million pieces of plastic are discovered within the ocean; consequently, scientists predict there could be up to 5.25 trillion pieces of macro and microplastic within oceans around the world.

Professor of Marine Biology and co-author to the study, Jason Hall-Spencer, says, “Up to 13 million tons of plastics from land end up in the oceans each year and they have been shown to affect all types and sizes of marine species. Combine that with rising Co2 levels and the threat posed to the global ocean is stark. It reinforces the importance of taking steps to meet the standards demanded by international climate treaties so as to reduce the impact of ocean acidification and warming. It is also within our power to change cultures so that litter created on land does not become an environmental hazard in our oceans, both now and for future generations.”

Marine life is at risk of increased acidity within the ocean – acidity can cause drops in metabolic rates (the amount of energy expended by the particular species) and immune responses to other organisms like parasites. Additionally, the decline of calcium carbonate and increased ocean acidification as a result of plastic pollution cause damage to life-forms with carbonate-based shells and skeletons, such as sea urchins, clams, oysters, starfish and scallops. This then affects larger predators like whales and sharks who struggle to find food sources, disrupting food webs. Ocean acidification also affects coral, weakening the skellingtons and causing breakage. Its effects on the ecosystem are wide-ranging, from reducing habitat quality to weakening ecological processes like nutrient cycling. Lead author of the study, Dr. Ben Harvey voiced his concerns over growing Co2 levels and continuous plastic pollution: “Discarded plastic drinking bottles have become a common sight in our oceans and we were expecting to see them being colonised by different types of bacteria. We also predicted that raised Co2 levels would cause significant changes in the bacterial colonies, but it was still surprising to see the extent of that change and how the raised levels affected species differently. To see beneficial species dwindling while harmful species thrive is an obvious present and future cause for concern.”

Organisations such as the International Alliance To Combat Ocean Acidification are working with governments and scientific networks to spread awareness about the impacts of plastic pollution, while the International Partnership For Blue Carbon, consisting of governments including Australia, the UK, Belize and Mauritius as well as organisations and research institutions, is designed to share knowledge and advance practical action. Reversing the damage of microplastics to food webs and ecosystems will be a difficult process but cutting down on the production of single-use plastic would be a significant start to ensuring that the ocean can rejuvenate itself. Marine life is not only threatened by ghost nets, illegal fishing and rising sea levels, but by the water itself. The Paris Agreement makes no mention of ocean acidification and more awareness and dedication is vital to ensuring this developing problem is taken more seriously by governments worldwide.