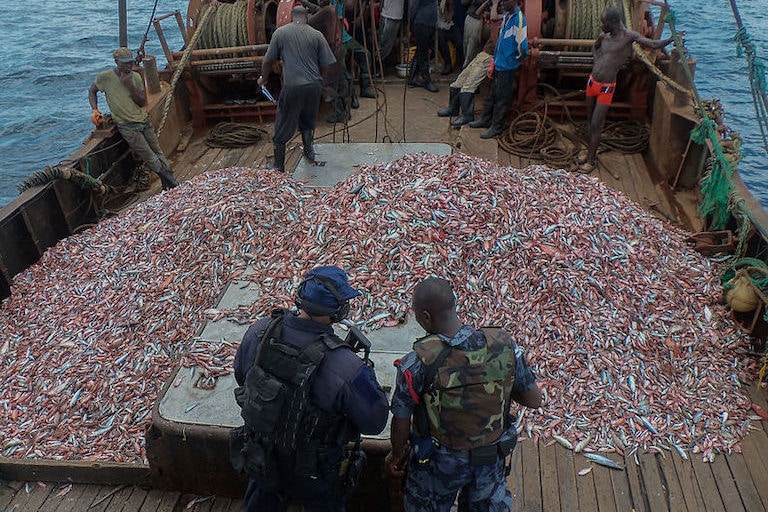 A new paper calls for greater coordination by governments around the world to tackle the persistent problem of organised crime in the fisheries industry impacting the wider economy. The “blue paper” published Aug. 18 by the High Level Panel for a Sustainable Ocean Economy, an initiative by 14 world leaders, highlights the extent of crimes associated with global fisheries beyond illegal fishing, including fraud, money laundering, corruption, and drug and human trafficking. They occur worldwide throughout the entire fisheries value chain: onshore, at sea, in coastal regions, and online, it says.

The paper says these crimes are profit-driven while depriving states of national revenue, threatening the livelihoods of coastal communities and endangering marine ecosystems around the world. The authors add that the perpetrators behind organised crime in the fisheries industry are companies with complex operational activities in many countries. Some of these crimes are corporate in nature, as in the laundering of criminal proceeds through offshore financial centers where ownership can’t be traced.

A pressing issue that the paper highlights is the poor understanding of the true scale of organised crime in global fisheries, given that no statistical data are publicly available to give an accurate estimate.

“The nature of organised crime is that it is clandestine, making it more difficult to gather accurate empirical data,” Emma Witbooi, lead author of the report and director of South Africa-based PescaDOLUS International Fisheries Crime Research Network, told Mongabay in an email.

Witbooi, who is also a research associate at Nelson Mandela University in South Africa, said the empirical studies and data that existed on illegality in fisheries were focused almost entirely on illegal fishing itself, and not the broad range of associated criminal activities throughout the fisheries value chain. She said this was due to the prevalence of traditionally only viewing illegality in the fisheries industry in the context of violations of fisheries management regulations.

“Fisheries agencies, however, do not have the mandate or the skills and resources to deal with organised crime in the sector,” Witbooi said. “This requires a shared understanding of the problem to effectively cooperate on law enforcement cross-border investigations, ensuring the most appropriate agencies are involved (i.e. not just fisheries but tax, labor, police, etc.) and to ensure suitable skills and resources are employed.”

“Fisheries crime is also frequently not given priority at national level as cases are notoriously difficult to successfully prosecute leading to a likely gross underestimation (at data level) of the extent of such cases,” she said.

“And cases that make it to court frequently focus on fisheries infractions (as they are the easiest to prove) rather than other crimes along the value chain so examining case records will not necessarily give an accurate indication of the number of cases involving organised crime in fisheries.”

The poor monitoring, control and surveillance (MCS) capabilities of many coastal states makes it even more challenging to gain an accurate picture of the extent of illegality in the fisheries industry, said Kamal Deen-Ali, the paper’s co-lead author and executive director of the Ghana-based Centre for Maritime Law and Security Africa.

“[A]longside the fact that they usually take advantage of the loophole in the system such as inadequate MCS capability, one clear thing is that for the networks to be effective in executing these crimes, there are complicit law enforcement agents who take a bribe in exchange for looking the other way,” Deen-Ali said in an email to Mongabay.

“In a nutshell, turning the tide on these crimes requires more than instituting laws and cooperation between countries and agencies, it requires active intelligence gathering and importantly improving the welfare of coastal communities many of whom are already vulnerable to the impact of depleting fisheries,” he added.

“TOC in fisheries will occur in countries that lack law enforcement and with a high level of corruption among enforcement officials and bureaucrats,” Mas Achmad Santosa, co-lead author of the paper and chief executive of the Indonesia Ocean Justice Initiative, told Mongabay in an email.

The marine advocacy NGO Oceana, which was not involved in writing the blue paper, welcomed its recommendations for policymakers. It called on countries to mandate fishing fleets be equipped with and use publicly accessible tracking technologies, and publish data of vessel monitoring systems, fishing vessel authorisations, and information on the real owners of fishing vessels.

Oceana also urged governments to ban their citizens from engaging in or supporting illegal, unreported and unregulated (IUU) fishing anywhere in the world.

“The governments of the world should work together to ensure that all seafood is safe, legally caught, responsibly sourced and honestly labelled to protect the oceans and the people who depend upon them,” Beth Lowell, Oceana’s deputy vice president for U.S. campaigns, said in a statement.