Plastic and Other Environmental Pollution in the Great Lakes 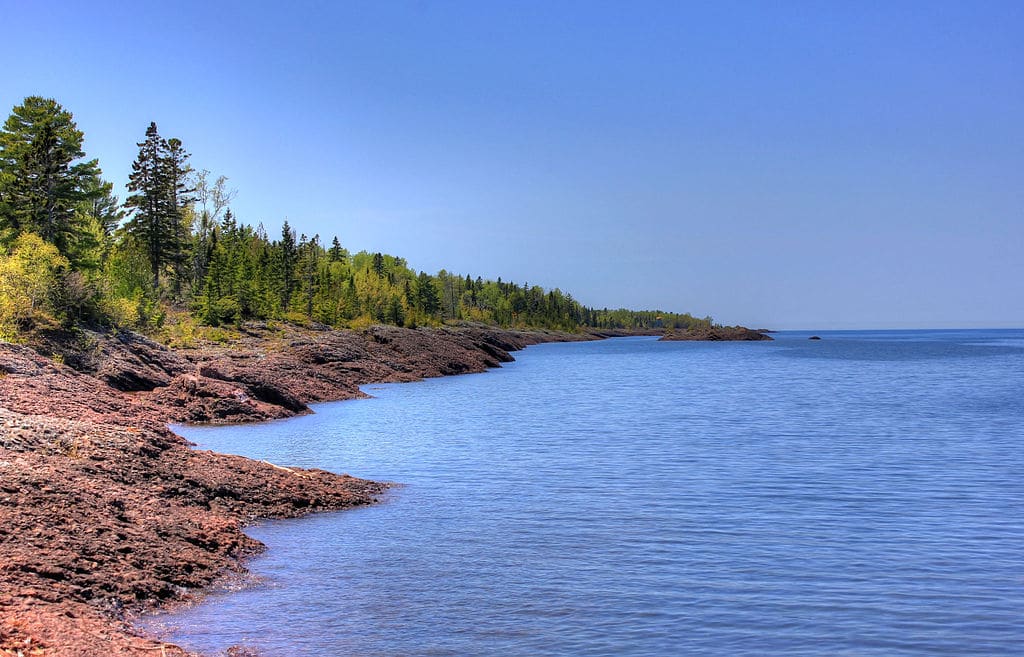 Stretching across North America, The Great Lakes is one of the largest and most important surface freshwater ecosystems in the world. But due to decades of industrial, agricultural, and urban pollution, the Five Great Lakes are experiencing poorer water quality, habitat degradation and biodiversity loss. We discuss the services that the body of water provides, the state of pollution in the Great Lakes, and possible solutions to restore them.

What are the Great Lakes?

Though all five lakes lie in separate basins, they are interconnected, forming a chain of lakes and rivers from the east-central interior of North America to the Atlantic Ocean. 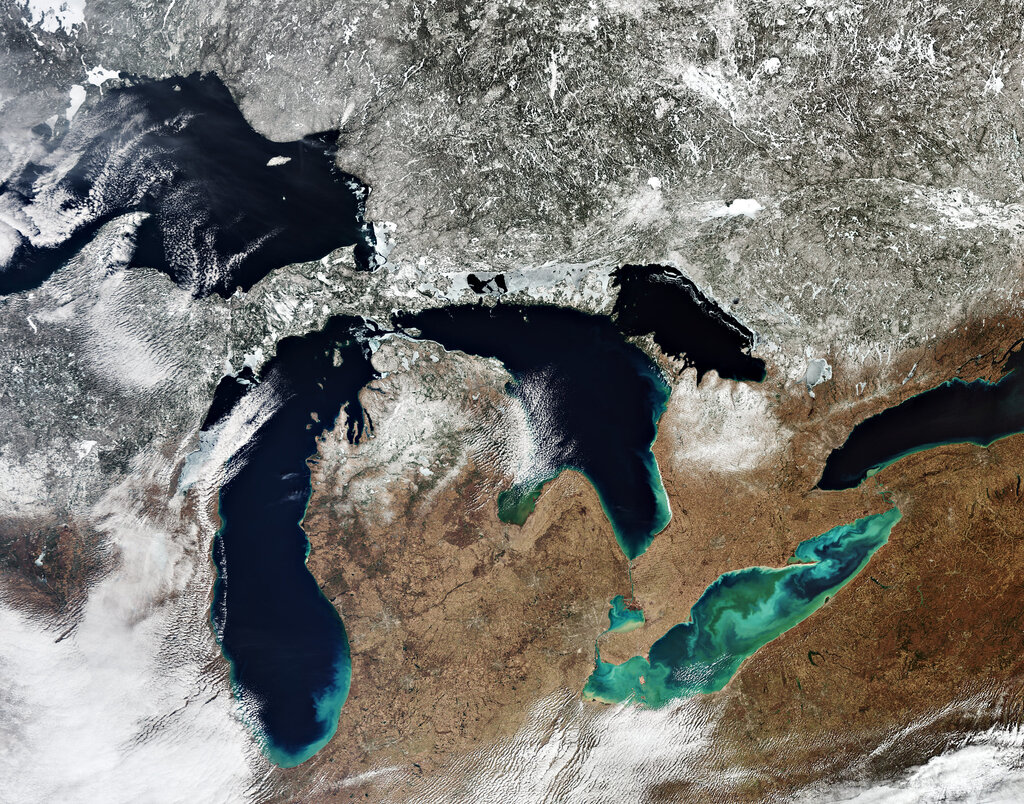 Why are the Great Lakes Important?

This massive body of water was first formed at the end of the Last Glacial Period around 14,000 years ago, where retreating ice sheets melted into the natural basins of the landscapes. Today, the Great Lakes provide drinking water for more than 35 million living in the basin region, which is about more than 30% of the Canadian population and 10% of the US population.

The natural resource also forms a significant part of the economy for both the US and Canada, supporting more than one million jobs across a wide range of sectors including manufacturing, tourism, transportation, warehousing, farming, and fishing. According to a  2020 EPA analysis, the Great Lakes reportedly generates USD$82 billion in wages in the US every year. For Canada, the freshwater system supports nearly 25% of its national agricultural production. Tourism in particular, plays a big part in generating commerce. Water-related outdoor recreational activities are valued at USD$15 billion annually, nearly a third of which comes from just sport fishing.

But it’s important to note that the Great Lakes are natural ecosystems too, and are home to a variety of fish and wildlife species of concern, such as lake trout, lake sturgeon, lake whitefish, walleye, and the landlocked Atlantic salmon. For numerous fish species, the Great Lake Basin offers a safe haven for breeding and feeding purposes, as well as provide the necessary migration corridors for many migratory bird species, including waterfowl, colonial nesting birds, neotropical migrants. Any changes or impacts to the Great Lakes will ripple through both human and wildlife communities.

Unfortunately, human activities are causing great harm to this important body of water to the point in which the Great Lakes is sometimes referred to as the “river of fish tumours” due to its long history of industrial, agricultural, and urban pollution, leading to poor water quality and habitat degradation.

However, plastic waste and pollution is the greatest threat to the freshwater system. More than eight million tonnes of plastic ends up across the world’s oceans every year; for the Great Lakes, there’s more than 22 million pounds of plastic entering its waters every year alone, according to Rochester Institute of Technology.

Plastic waste or debris in the environment severely impacts wildlife. They can mistakenly ingest them as food or get entangled in them, which animals asphyxiate or starve from, as well as facilitate the transport of invasive species.

Plastics also cannot decompose; they break down into smaller particles known as microplastics over hundreds of years. Though microplastics cannot often be seen with the naked human eye, their small sizes make them easy to escape wastewater treatment plants and enter rivers and lakes. As a result, wildlife animals often unknowingly absorb and consume it, which in turn, reach into human bodies when we eat fish. Though it is still too early to tell the effects of microplastic ingestion for humans, some studies suggest it could affect brain development during pregnancy and reproductive systems.

Other Pollution in the Great Lakes

Water contamination is another salient form environmental pollution occurring in the Great Lakes.  Chemicals that enter the lakes can remain there for years and even decades, which could easily build up across the food web. Toxic chemicals come from sources like industrial waste, raw sewage overflows, runoff from cities, and mining operations in the region – particularly sulphide mining – where excess nutrients throw the ecosystem out of balance.

Though not necessarily a direct pollution, but the effects of climate change are already being observed in the Great Lakes: increased surface and water temperatures, which are contributing towards lowered water levels of the lakes as water are evaporated at faster rates; drying coastal wetlands, thereby increasing exposure to toxic sediment pollution; and rising number of severe storms and rainfall events leading to sewage overflows.

The Great Lakes are in dire need of cleaning up and protection. While individual action such as reducing plastic usage and consumption can help reduce the risk of microplastics escaping into the waters, concrete policy implementation and regulation is required to prevent further plastic pollution and environmental degradation of the Great Lakes.

The Environment Law and Policy Centre, a environmental legal advocacy organisation based in the Midwestern United States, have put forward six major areas in which to protect and tackle pollution in the Great Lakes. This includes blocking industrial pollution and making sure no discharges for toxic chemicals such as ammonia and cyanide that could kill thousands of fish, protecting the water system from oil pipelines – either by removing the pipeline or hold companies accountable for spills, as well as advocating for green infrastructure to build climate resilient communities amid worsening impacts of climate change. 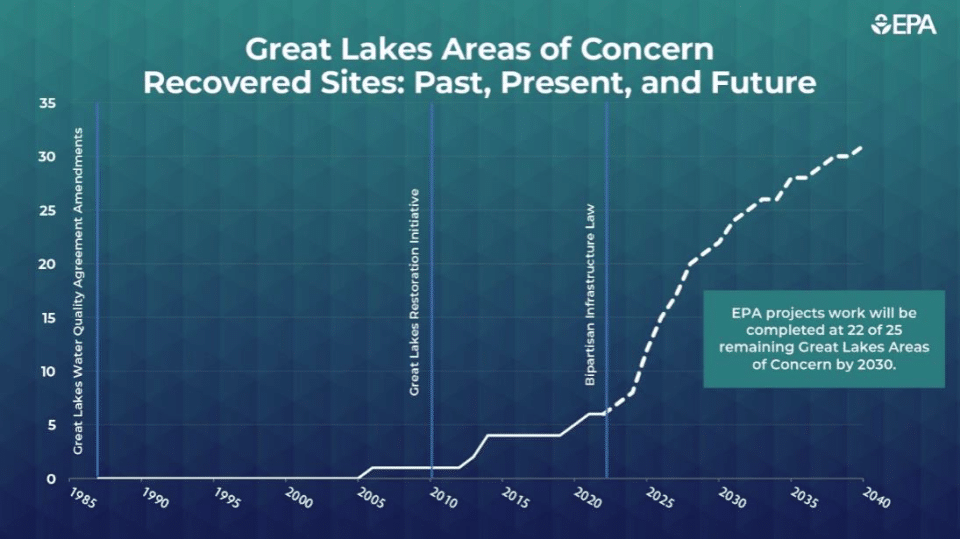 Great Lakes Areas of Concern. Graph by the EPA

There is also some positive news: In February 2021, US President Joe Biden announced a USD$1 billion investment into the cleanup and significant restoration efforts of the Great Lakes. The funds will come from the bipartisan infrastructure bill, which was passed after a harrowing legislative process. Between now and 2030, efforts will go towards restoring 22 of the most environmentally degraded sites, known as “Areas of Concern“ by the Environmental Protection Agency (EPA), across the states of Wisconsin, New York, Ohio, Minnesota, Michigan, Indiana and Illinois.

The billion-dollar investment and the accelerated cleanup and restoration effort also aims to secure clean water for generations to come, and “deliver environmental health and recreational benefits for communities throughout the region,” a senior White House official said to CNN. The end goal will see the economy in the communities across the Lake River region revitalised.