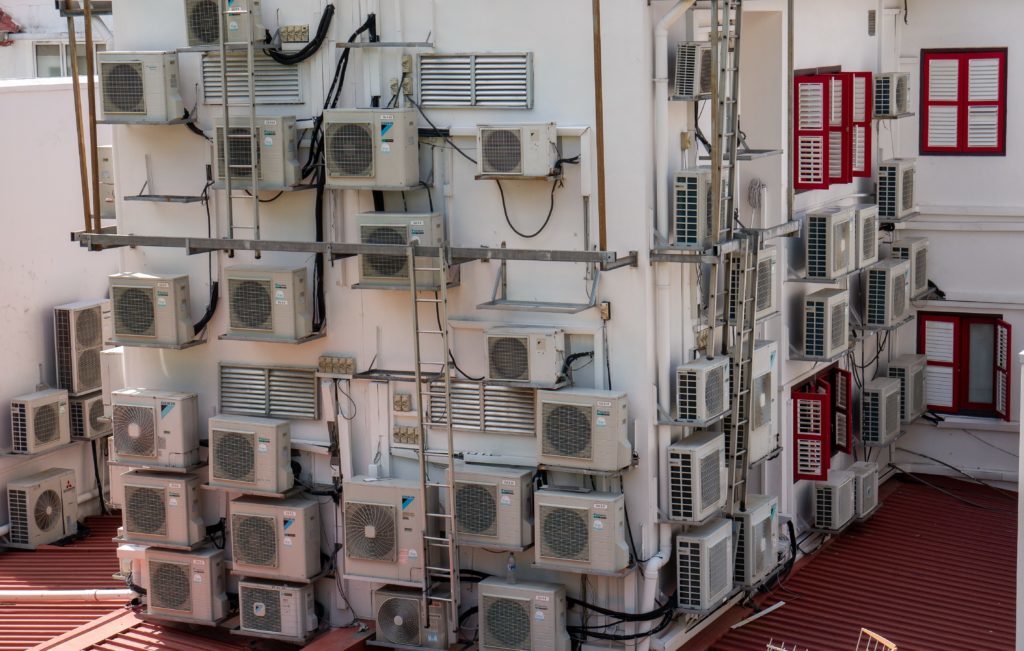 Our cooling devices use powerful greenhouse gases called hydrofluorocarbons (HFCs), thousands of times more potent than carbon dioxide and curbing them might be the key to tackle the climate crisis.

There are an estimated 1.4 billion fridges and freezers in the world today. There are also 1.6 billion air conditioning units and countless refrigerated trucks, warehouses, containers, medical appliances, and many industrial devices that require cooling. The number of cooling devices is expected to reach 14 billion worldwide by 2050.

Every refrigerator or air conditioning unit contains chemical refrigerants that absorb and release heat to enable cooling. Dangerous refrigerants, specifically Chlorofluorocarbons (CFCs) and Hydrochlorofluorocarbons (HCFCs), were once culprits in depleting the ozone layer. But they have already been phased out thanks to the 1987 Montreal Protocol.

Manufacturers today use a class of chemicals known as hydrofluorocarbons (HFCs) as refrigerants in air conditioners and refrigerators. HFCs do not destroy ozone, but they do form a blanket at high altitudes holding in heat. They have 9,000 times greater capacity to warm the atmosphere than carbon dioxide.

Refrigerant management — reducing emissions of greenhouse gases like HFCs from cooling appliances — might be the most impactful step to solving climate changing. An analysis of different climate change solutions and their mitigation potential by Project Drawdown–a research organisation that reviews, analyses, and identifies the most viable global climate solutions — ranks refrigerant management first among the top 80 possible solutions. The study estimates that by 2050 refrigerant management can reduce 89.7 gigatons of greenhouse gas emissions, 5 gigatons more than the closest solution in the list: onshore wind turbines.

Refrigerant management, just like other climate change mitigation solutions, is not easy to implement. “There are weak regulations on controlling refrigerants, their leakage, and their end-of-life recovery,” says the study.  “There are no economic incentives for the recovery of refrigerants. Funding, training, technical, and informational barriers are also some of the limitations for the adoption of this solution.” It is estimated that the adoption process worldwide would cost $902.8 billion by 2050.

In order to successfully adopt the solution, the study says, new policies and regulations on refrigerant management need to be formulated and implemented worldwide. Strong regulations including a complete ban on venting of refrigerants must be introduced in national legislations.

As per the Kigali Amendment to the Montreal Protocol, developed countries, including the United States and those in the European Union, will reduce the production and consumption of HFCs from 2019. Much of the rest of the world, including China, Brazil and all of Africa, will freeze the use of HFCs by 2024. A small group of the world’s hottest countries such as Bahrain, India, Iran, Iraq, Kuwait, Oman, Pakistan, Qatar, Saudi Arabia, and the United Arab Emirates have the most lenient schedule and will freeze HFCs use by 2028. But the countries may substitute HFCs with chemicals that are either toxic, like ammonia, or flammable, like propane, which might lead to other problems like air pollution.

However, emerging market-based solutions that attempt to tackle the problems of refrigerants offer a glimpse of hope.  Disruptive companies like Phononic, which produces modern  refrigerators, rely on thermodynamic science instead of HFCs for cooling.  While standard fridges and freezers work by creating cool air and blowing it throughout an area using compressors and refrigerants, Phononic’s devices use semiconductors that draw heat out and transfer it elsewhere. Without a compressor, the devices are also extremely energy efficient.