The Looming Threat of Sea Level Rise in Bangladesh

The rise of the global mean sea level has been a hot topic in recent years as rising sea levels are expected to flood low-lying coastal areas around the world and even result in the disappearance of entire cities. While seasonal floods are nothing new in Bangladesh, climate change-driven sea level rise in the country is resulting in much more frequent and intense floods, with low-lying coastal areas in the Bay of Bengal particularly affected by this phenomenon. We explore the causes and effects of sea level rise in Bangladesh.

What Causes Sea Level to Rise?

In the 2019 Special Report on the Ocean and Cryosphere in a Changing Climate, scientists agreed that global warming-triggered glacier melting and the thermal expansion of ocean waters – an increase in ocean surface temperatures, are the main drivers of global mean sea level rise.

In recent years, the world’s glaciers have been melting at an accelerated rate, especially the Antarctica and Greenland ice sheets. Although glacier mass loss fluctuates, scientists have observed an overall decreasing trend in the past two decades (see Figures 1 and 2).

While sea level rise began as early as the 19th century, the rate of increase has risen sharply in recent decades due to accelerating global warming, with climate warming triggering more rapid deglaciation, glaciers, and ice sheet melt. Throughout most of the 20th century, sea levels have risen at a rate of 1.4 millimetres per year. However, between 2006 and 2015, the rate nearly doubled, reaching about 3.6 millimetres annually. 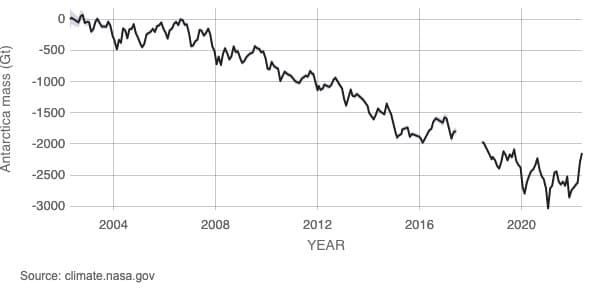 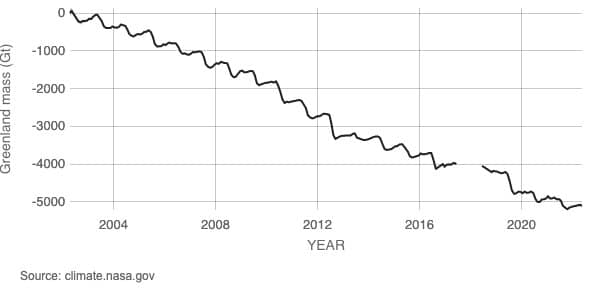 In Bangladesh, one of the world’s most vulnerable to climate change, an estimated 3.5 million people are at risk of river flooding every year due to sea level rise and increasingly intense monsoon seasons. The UN predicts that over the next decade, about 17% of Bangladeshi would need to be relocated if global warming persists at the present rate.

What Areas of Bangladesh Are Mostly Affected by Sea Level Rise?

Bangladesh is a low-lying coastal country located between India and Myanmar in South Asia and it is the eight-most populous country in the world. The average elevation of Bangladesh is nine metres above sea level and most of its urban population is settled in the low-lying coastal areas. Here, flat and fertile land makes for the perfect environment for urban development and agricultural production.

The South Asian country is crossed by several rivers – such as the Brahmaputra River and the Padma River – originating in the Himalayas and flowing all the way to the Indian Ocean. These rivers are an important water source for the agricultural and industrial sectors as well as for domestic use as they deliver seasonal meltwater from the Himalayas. However, they may cause significant flooding when melting of ice sheets intensifies as a result of high temperatures.

Bangladesh is located on the windward slope of the Himalayas, an area that, especially during the summer monsoon period from around June to October, is subjected to orographic rain – precipitation produced when moist air from the ocean is lifted as it moves over a mountain range. According to the Bangladesh Water Development Board, the annual average rainfall in Bangladesh ranges between 2,000 and 5,000mm, with maximum rainfall usually recorded in the month of July at about 520mm.

When and Why Do Floods Occur?

Annual seasonal flooding in Bangladesh usually occurs in the summer months, from June to September. However, floods can take place as early as May.

Global warming is undoubtedly one of the reasons that trigger the early arrival of the monsoon season in Bangladesh. Climate change has contributed to a significant increase in mean temperature during the summer months. The ground heating up favours the formation of thick clouds associated with heavy precipitation.

As mentioned above, average monthly rainfall and river discharge is found to be higher in the summer under the effect of the monsoon and glacial meltwater. These two factors, coupled with rising sea levels in Bangladesh, make floods much more likely to occur in these months.

This year, the country has been repeatedly hit by severe flood events, which have resulted in disruptions of power supplies as well as transportation, education, and medical services. In June, northeast India’s Assam and Meghalaya states and low-lying parts of Bangladesh experienced some of the worst floods in more than a century. Erratic rains triggered unprecedented floods that inundated about 80% of the areas in Sylhet and Sunamganj districts, killing dozens and displacing millions of people.

Who Is At Risk?

Children and low-income Bangladeshi are usually the ones most exposed to the risk associated with floods, as their capacity to respond to natural and human-induced disasters is low.

On top of that,  people’s vulnerability is often being used against them, or, to put it in another way, is being weaponized. Weaponizing vulnerability, a very present phenomenon in developing countries, refers to the exacerbation of people’s precarity by excluding them from much-needed and due assistance, while directing resources to bolstering the well-being of those already well-positioned to respond to climate threats. In the case of Bangladesh, this phenomenon is noticeable as coastal regions – knowingly vulnerable to sea level rise – are usually inhabited by poor communities, while high-income people have the financial resources to move out and settle down in lower-risk areas.

How is Bangladesh Tackling the Issue of Sea Level Rise?

Bangladesh is heavily reliant on international support for its relief work as the readiness and resources of local rescue teams and the government are scarce.

For years, NGOs as well as different bodies of the United Nations – such as the International Children Emergency Fund (UNICEF) and the Development Programme (UNDP) – and other international organisations have provided economic support and humanitarian relief work to vulnerable parts of Bangladesh. These are extremely helpful in providing emergency relief, especially for remote areas.

To support the communities affected by the latest floods that took place in June this year, for example, UNICEF has provided emergency support for the disadvantaged, especially children and women. Works done by this organisation include providing shelters for the displaced, distributing emergency kits, mobilising relief funds to support the local government, and coordinating further humanitarian work with other UN agencies.

In light of the latest catastrophe, Bangladesh’s Prime Minister Sheikh Hasina also addressed plans to build regional infrastructure to make urban areas more resilient to extreme weather events, from building elevated roads to implementing measures that would maintain the depth of the rivers. This, however, will require the support of the international community.

EO’s Position: The latest IPCC report makes it clear that no amount of emissions reduction can stop the near and mid-term impacts of sea level rise. Even if we eliminated all carbon emissions today, sea level rise would continue in response to the warming that has already occurred. Floods and other extreme weather are expected to intensify in the coming decades and the only option we have to mitigate them is by cutting our emissions immediately. This requires phasing out of fossil fuels while simultaneously scaling up renewable energy generation but, most importantly, a much stronger commitment from governments around the world to meet their Paris Agreement goals.