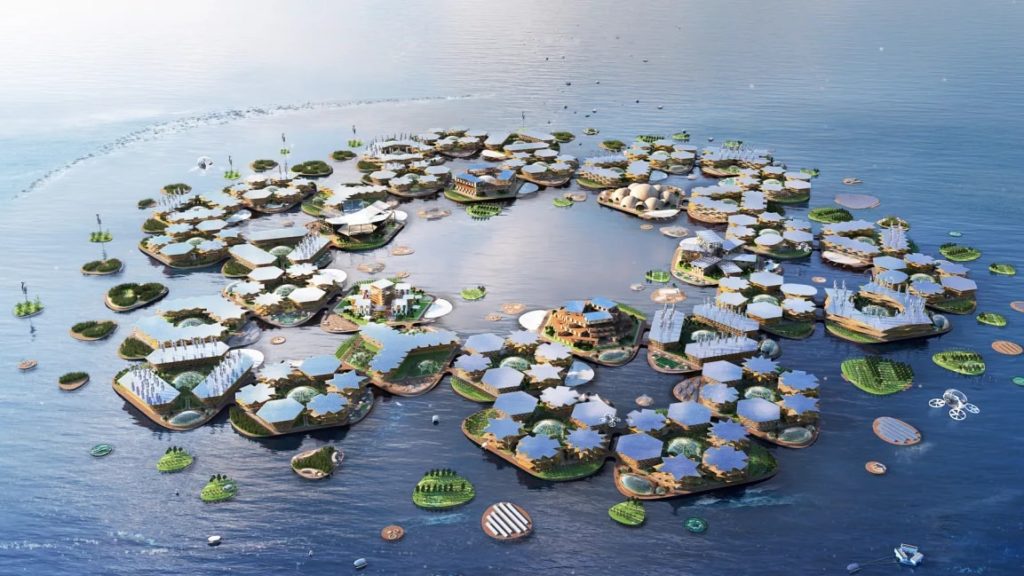 In 2007, Marc Collins Chen, minister of tourism of French Polynesia, said that a third of the French Polynesian islands would be submerged by either 2035 or 2050- “depending on which scientist you spoke to.” An estimated 2.4 billion people- 32% of the world’s population- live in a coastal region and will likely be impacted by rising sea levels as a result of the climate crisis. In late 2018, Chen pioneered the concept of off-shore urban infrastructure, or ‘sustainable floating cities’, in order to tackle the issue of rising sea levels, founding the company Oceanix to put his vision into action.

In a 2019 meeting with the UN, Chen and a group of specialists, including zero waste experts, proposed their idea of what sustainable floating cities would encompass. Their plan involves 4.5-acre hexagonal floating islands- about the size of three and a half football fields- that each house 300 people. These islands are the foundation upon which these settlements would be built. A village could be formed by combining six of these islands and connecting them via an open port. The idea is that as long as each island operates an essential service such as healthcare, education, spirituality and commercial services, they could be fully functional communities. Furthermore, outside these communities there could be uninhabited functional islands for energy collection and crop yielding.

Furthermore, Chen claims that marine life would not be threatened under his vision as ‘the technology exists for us to live on water, without killing marine ecosystems’. There have been several plans for floating homes and apartments but what makes Oceanix’s plan more viable is their plan for scalability, such that scaling up and looping six villages together would result in a city of 10 800 people. These floating islands are intended to be self-sustaining in terms of their energy, food and water production. Ideally, they would be efficient as well through their repurposing of waste materials produced, and fuelling all operations with energy produced by the islands themselves in a closed loop system. These efficiency goals are ambitious, and take inspiration from cities such as Stockholm, Amsterdam and Copenhagen (this city is planning to become the first carbon-neutral city by 2025) that are making efforts to steer away from their reliance on fossil fuels.

The feasibility of the project hinders its implementation. Much of the technology to make this happen will need to be either invented from scratch or wholly adapted to fit the floating city. Further, Oceanix has yet to formulate a concrete business plan that would render them eligible to apply for green venture capital funds or government grants which aim to promote sustainable development. Furthermore, one of Chen’s main goals is to make these islands affordable but given the amount of investment and work that the first prototypes would need, this may be difficult to achieve. Moreover, the governance of such settlements has come into question, as it is unclear how these islands will be run, if inhabitants will have to commute to the mainland, and how they fit into more established economic systems.

Despite the technicalities, the point of such a concept is to revolutionise the way that we live, and question the systems we have in place. In a world that is in need of change, it’s these crazy ideas that will breed the innovations and sustainable technologies that are needed to combat pressing environmental concerns.