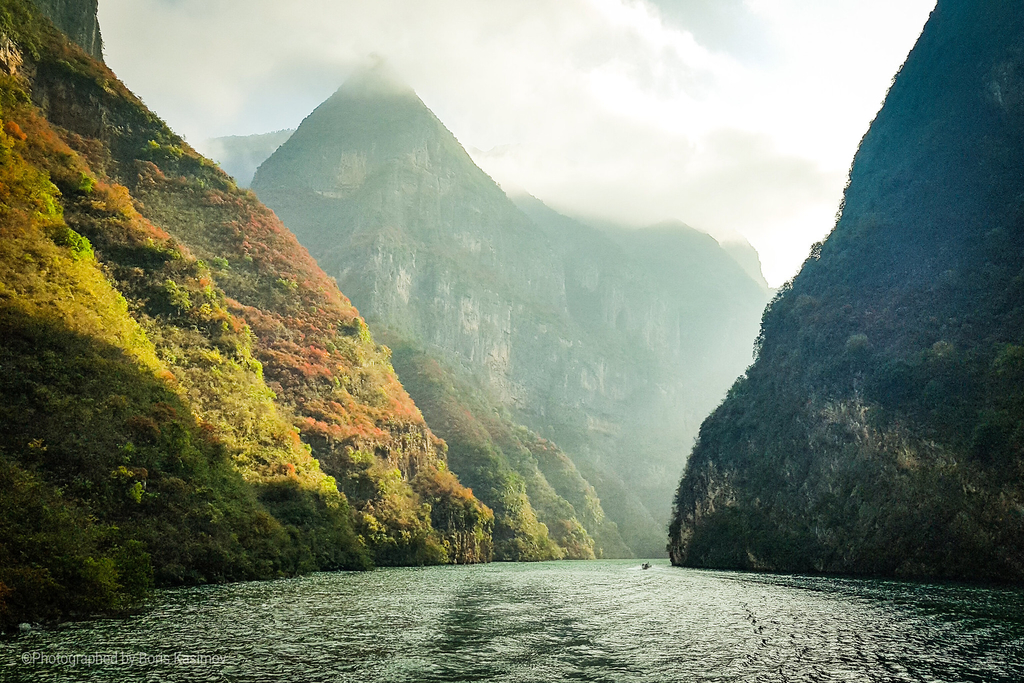 Water underpins a country’s development, and China- one of the fastest-growing economies- is of no exception. Water supports the country’s 1.43 billion population and its booming industries, but it is limited and unevenly distributed. In 2005, Former Chinese premier Wen Jiabao warned of the danger of water shortages which he said would threaten the ‘very survival of the Chinese nation’. Climate change is diminishing accessible water resources in China, triggering a severe water shortage crisis within the national boundary. Massive water projects are being constructed to deal with this shortage crisis, bringing a new range of environmental, social and geopolitical challenges.

Home to 20% of the global population, China has only 6% of the world’s total freshwater resources. 2014 statistics from the World Bank indicate that the total renewable water resources per inhabitant is only 2 018 cubic meters each year- 75% less than the global average.

Causes of the Water Shortage Crisis in China

Climate change plays a key role in the water shortage crisis in China. For thousands of years, civilisations along the Yangtze and Yellow Rivers fed on the glacial meltwater from the Qinghai-Tibetan Plateau – also known as ‘The Third Pole’. Once a stable source of river flow, the ice mass is now less capable of supplying glacial melt with fresh snow and ice, since global warming has raised the temperature of the glacial region by 3- 3.5 degrees Celsius over the past half-century. A study by Greenpeace in 2018 revealed that 82% of China’s glaciers have retreated and more than one-fifth of the ice cover has disappeared since the 1950s. Consequently, glacial run-off into the Yangtze alone has been reduced by 13.9% since the 1990s, lessening freshwater availability. Greenpeace anticipates the shortage will become ‘dramatically’ acute when the glaciers reach their ‘peak water’- when the rate of water consumption surpasses water supply- which could happen as early as 2030.

Meanwhile, increasing temperatures have also changed atmospheric circulation. It has become more difficult for humid summer monsoons to reach northern and inland areas, resulting in more unreliable rainfall patterns. This abnormally dry weather has been experienced by Beijing in recent years: between October 2017 and February 2018, no precipitation, including rain and snow, was recorded in the metropolis. The 116-day drought is unprecedented in the country’s record.

The country’s uneven resource distribution further exacerbates the scarcity problem: 80% of water is concentrated in South China, but the North is the core of national development. For instance, President Xi Jingping’s JingJinJi Project initiated in 2014 integrates three heavily industrialised Northern provinces- Beijing, Tianjin and Hebei- as a single megalopolis to compete with other world-class economic regions such as the New York Tri-State Area. The estimated population of the regions combined is 130 million, whereas the water available for consumption annually per person in the three provinces stands below 184 cubic meters (Hubei is below 100) as illustrated by the China Statistical Yearbook (CSY), far below the 500 cubic meter standard of water scarcity. Water is insufficient in the North and intense development is only putting more pressure on water demand.

The combination of inefficient water management and widespread water pollution has rendered China unable to effectively supply enough consumable water in some provinces; this is not taking into consideration the demand for water in future urbanisation. 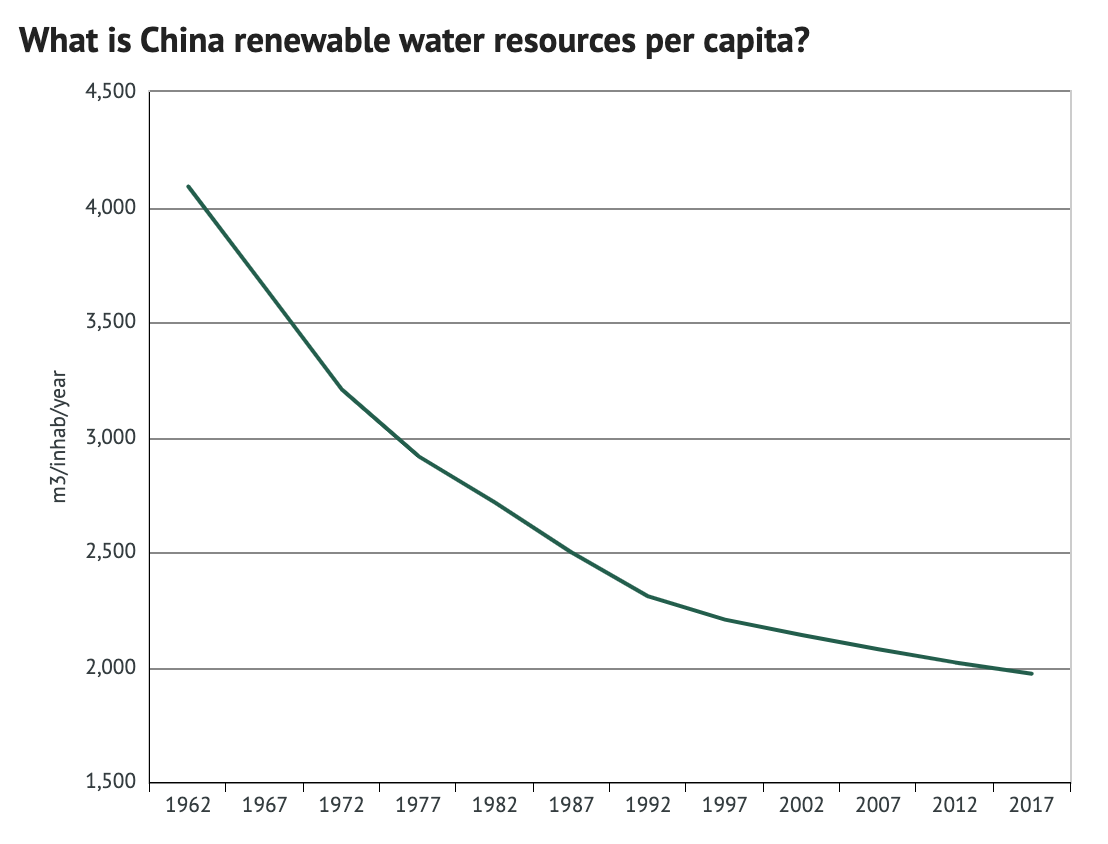 The Solutions to the China Water Shortage Crisis

The pressing water shortage crisis has forced China to develop various water schemes to boost water availability in dry regions; the South-North Water Transfer Project (SNWTP) is arguably the most well-known. With its conceptualisation traced back to the 1950s, the project is the largest and most expensive engineering work in the country; it is expected to cost $62 billion by completion in 2050, almost double the Three Gorges Dam Project.

The SNWTP aims to alleviate the water shortage problem in northern China by moving water from the Yangtze River in the South through 1 500 kilometre-long canals. The East and Middle routes- each taking 10 years to build- have been in service since 2013 and 2014 respectively and are capable of transferring 20.9 billion cubic meters of water each year. The West Route is expected to be completed by 2050.

However, the project opens the door to environmental, social and geopolitical challenges.

As construction advances across the country, natural landscapes are harmed, leading to biodiversity loss. All three routes will change natural hydrology on an unprecedentedly large scale; the East Route rises the water level of the four lakes it passes through. A study in 2009 estimated that aquatic plants will decline by up to 0.25 million tons in Dongping Lake surrounding the construction of the East Route. Freshwater clams, whitebaits and algae are among those species that will be affected.

It is not the first time China’s water schemes have led to the disappearance of local species. In the last decade, the construction of the Three Gorges Dam has permanently changed the Yangtze’s landscape, damaging the habit of the already-endangered baiji dolphin and rendering them ‘functionally extinct’ at the end of 2006.

The project may change hydrology and microclimate in the region; a 10-year study analysing the potential climatic impacts of the Middle Route predicts that the sudden influx of water may alter local evaporation and precipitation rates by bringing more frequent convection (short and intense rain) to the area. Because rain patterns affect temperature, the researchers predict regional microclimate will be modified as the project progresses.

The project diverts natural resources to one mega-region at the expense of another, adversely impacting the social well-being of the southern water-supplying region and challenging China’s domestic stability in the long term.

China’s provincial water disputes provoked the ‘blocking dam’ incident of 2001. Industries in the upstream Jiangsu province had been degrading the shared water of the Zhejiang province since the 1990s. A decline in usable water triggered Zhejiang residents to protest by sinking boats in the waterway to block the polluted water, revealing the provincial governments’ ineffective cooperation on resource management. If there is any public discontentment due to the SNWTP, it will not be merely provincial but regional, which could compromise the country’s national governance.

The project forces about 330 000 people to relocate to allow for the expansion of the Danjiangkou reservoir on the Middle Route. Insufficient compensation and lack of employment opportunities have created difficult lives for the displaced population, igniting a number of revolts including violence against immigration officials and obstruction of main roads, as reported by China Daily. Coercive displacement is typical of command economies in communist countries like China, North Korea, and in the past, the Soviet Union, whereby the distribution of natural and human resources is manipulated by the central government to maximise national interests, while sacrificing individual rights. Forced evictions occur with most infrastructure projects in China, and is a constant source of mass protests.

The water supply of the Yangtze Basin in Southern China relies on natural precipitation and glacial melt. As climate change accelerates Himalayan glacial retreat and brings abnormal weather, Southern China may become equally vulnerable to water insecurity; already, south-west China experienced a severe drought in 2011, which impacted the drinking and irrigation water of more than 60 million people. The SNWTP takes water from the Yangtze River and reduces its river discharge; a decline in groundwater may result in seawater flowing inland in dry seasons, contaminating the freshwater aquifers of the Yangtze Delta.

China’s South-East Asian neighbours are equally concerned by China’s response towards its water issues. Chinese territory hosts the headwaters of many important regional rivers. For example, the Mekong originates from the Tibetan Plateau and flows through Western China before reaching Laos, Thailand, Vietnam and Myanmar. The  Brahmaputra also flows across the boundary of China, Bangladesh and India. Therefore, China’s changes upstream can significantly impact the water of downstream countries.

China is often feared to control regional water resources, shown in its reluctance to sign international agreements on cross-border water management. The country can seize water sources without any military force; because the rivers originate within its territory, they are seen as China’s natural assets. The SNWTP reinforces this impression- despite the inclusion of transboundary rivers such as the Mekong, the Nu River and the Brahmaputra in the West Route, China keeps the project unilateral without seeking input from the affected countries. As a study has analysed, any physical resistance by these countries would be deemed as military aggression, forcing them to comply so as not to compromise regional peace and water sovereignty.

While the West Route is currently in its planning stage, there is already tension and mistrust by residents. In late 2017, the ‘Red Flag River Project’- a proposal by Chinese scientists and engineers to divert Himalayan glacial water to China’s arid West- created panic among India’s media, since Himalayan glacier melt is an important source of water for two of India’s most important rivers. Although the project was found to be fraudulent, India’s response illustrated its mistrust of China’s use of the region’s water resources.

China’s SNWTP is at best a short-term solution, preventing the government from correcting man-made problems and creating new challenges in the intra- and international community. Experts suggest alternative solutions, such as proper utilisation of local water resources through raising the water price and improving water management bodies.