With global poverty expected to increase drastically due to the coronavirus pandemic, experts say that it has become more important to review the capacity of forests to cushion economically-disadvantaged sectors from exacerbated levels of impoverishment.

In its report “Forests, Trees and the Eradication of Poverty: Potential and Limitations,” released in October, the International Union of Forest Research Organizations (IUFRO) said that forests play a “crucial role in risk management, preventing the poor from sinking even deeper into poverty.”

“Globally, around 40% of the extreme poor – or some 250 million people – are estimated to live in forest and savannah areas, and frequently, the rural areas where the world’s poorest live have high tree cover and high levels of biodiversity,” the study said.

Countries have already started to repair nature as part of their plans to revitalise the economy post-COVID-19.

Now there are also calls to focus on forests – a rich source of resources. From providing sources of income through timber and non-timber forest products to strengthening food security, forests have contributed to as much as 25% of the income of rural households, the report’s accompanying policy brief said.

IUFRO cited examples in Mexico, where granting communities with direct control over most parts of the value chain in commercial forest management, has decreased poverty. Trained by forestry authorities, the state government in the region of Yucatan and civil society organisations,  communities manage their own forests and forest enterprises and have their own sawmills instead of “stumpage,” or set fees for private firms that want to harvest or cut trees from forests. Owning their own sawmills also gives these communities more control over the production of lumber.

Further, a 2019 project in Madagascar, saw vanilla orchids from agroforestry plantations – which were cultivated in native as well as other forests- bringing much-needed income to families. Vanilla derived from the orchids is sold abroad.

While forests have helped mitigate poverty, the violation of rights of forest dwellers like indigenous people and their prohibition from accessing the forests themselves have resulted in lopsided development in tropical forest-rich countries like Cameroon and the Democratic Republic of Congo.  Those that benefited economically, historically, as the study pointed out, were European countries like Belgium, France and Germany, as they are the ones which landed deals for forest exploitation and conversion.

Global Witness reported in 2018 that illegal logging by European company Norsudtimber continues to expand, an allegation that the company has denied, while France and Norway reportedly planned to pour funds into industrial logging in DRC. There was positive development in 2019, however, as DRC officials issued a forest concession for the first time to indigenous communities.

IUFRO pointed out then that it’s important to identify the factors limiting the potential of forests to reduce poverty and how these should be addressed:

Taking these into consideration, IUFRO said policymakers and leaders worldwide should include better management and use of forests in their post-pandemic recovery plans.

“Governmental policies to alleviate poverty typically tend to focus on agriculture, infrastructure, and cash transfers, among others, while neglecting the role of forests. This approach threatens not only to undermine efforts to conserve, restore and sustainably manage forests but also to lessen gains made in alleviating poverty.”

Formal definitions for “biodiversity” vary widely, but its purpose in measuring the variety of life is relatively uncontroversial. Emphasising the aspects of species richness and abundance, biodiversity is overwhelmingly concentrated in the tropical ecosystems of rainforests, savannas, freshwater bodies and shallow-water coral reefs, where over three-quarters of all known non-marine species can be found. Why is this? Amongst numerous proposed explanations, factors of high net primary productivity (NPP), spatial heterogeneity and niche conservatism hypothesis will be examined. 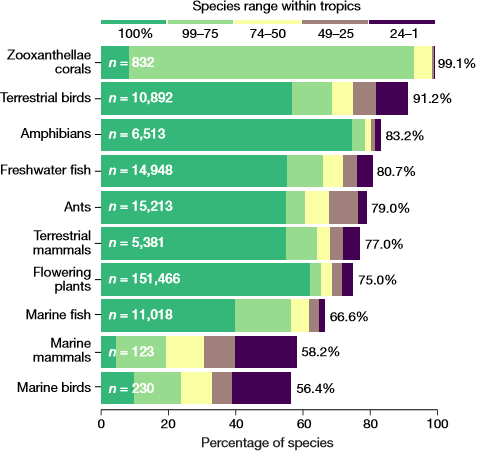 High NPP in tropical regions allow them to sustain larger communities with wider varieties of species, as easily observed from the sheer abundance of observable plant biomass in the tropics. The figure below illustrates how mean annual NPP near the equator (at 0° latitude) is approximately double that of temperate zones (between 35°-50°), while demonstrating the negative correlation between NPP and absolute latitude. With increased energy availability at lower latitudes, tropical habitats can support more species with minimum viable populations, contributing directly to α-diversity (alpha-diversity, the mean species diversity within a habitat at a local scale). Furthermore, greater ecosystem carrying capacity could also translate to enlarged populations of various organisms. Holding mutation rate constant per individual, bigger populations would increase frequency of mutations and hence genetic variation within a species. Beyond reducing their susceptibility to extinction, intraspecific genetic variation is also an important precursor for speciation to occur. 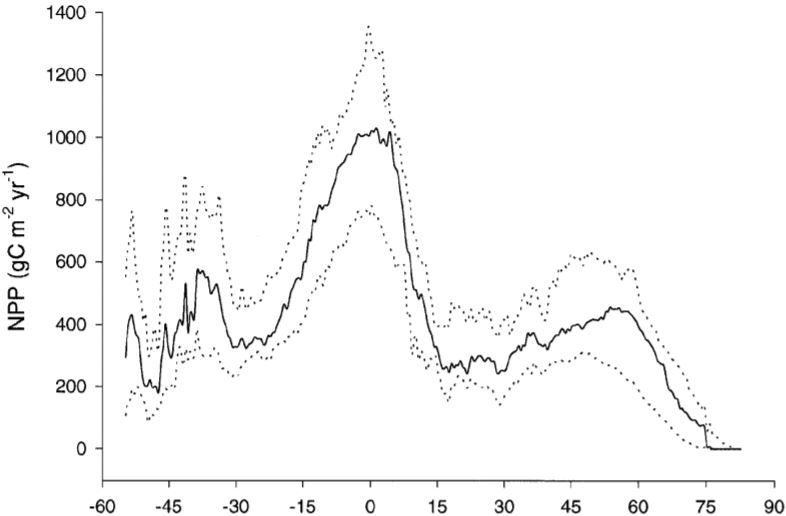 Without undermining the importance of energy abundance, it is spatial heterogeneity within the tropics which set the stage for speciation to take off, by partitioning resources more effectively while favouring further niche specialisation. For speciation to arise from intraspecific genetic variation, limited or complete segregation of deviating individuals (those individuals with differing characteristics from the average member of the same species) is required, until sufficient divergence of characteristics has occurred to ensure reproductive isolation. In tropical rainforests, stratification of vegetation into the forest floor, understorey, canopy and emergent layers helps facilitate these processes.

A study conducted in the Bornean rainforest of Kinabalu Park revealed that concentration of flower-visiting butterflies increased towards the canopy where flower availability was highest, while fruit-feeding butterflies mainly reside in the understorey where rotting fruits are more common. Differing physical characteristics were also observed across the vertical gradient, with forewing length of butterflies decreasing at greater heights, since smaller body sizes are advantageous near the canopy to avoid being preyed on by insectivorous birds.

Additionally, organisms themselves can become niches or resources for exploitation by others. Large old trees are especially well-known for providing microhabitats ranging from leaf litter to tree crowns, allowing organisms in tropical biomes to specialise and establish their own ecological niches separately from other individuals within the same species. Replicated over multiple generations, differences in intraspecific genetic composition then gives rise to formation of new species along these environmental gradients, bolstering β-diversity (beta-diversity, the change in species composition along an environmental gradient or across ecosystems. It is commonly measured along changing elevation on a mountain slope, or differing wetness of soil as we get closer to a river bank) in tropical ecosystems through means which are less prominent at higher latitudes, as temperate and polar region don’t have as many micro-habitats for deviating individuals to isolate and form new species along environmental gradients.

Given the numerous existing species with tropical origins, their limited expansion to higher absolute latitudes has been instrumental in preserving the relative species richness near the equator. Climatically stable tropical biomes have existed for lengthier geological timescales, whereas those further from the equator tend to be plagued with fluctuating temperatures and rainfall intensity. Consequently, more evolutionary lineages from the former managed to persist till the modern-day. The niche conservatism hypothesis aims to explain why tropical biodiversity seems largely restricted to their native geographies, by theorising that ancestral ecological preferences by different species would be preserved across time and space. This was empirically proven in a recent meta-study which concluded that species originating in warmer climates had steeper slopes of latitudinal diversity gradients, demonstrating significant affinity for tropical habitats. The poor survivability of tropical organisms in harsher environments- as in, those that experience extreme hot/ cold temperatures or those with low precipitation- is aggravated by their vast opportunities for specialisation within their native habitats, which allowed species to develop narrow ecological niches. Conversely, colder or more volatile environments may favour survival of generalist species with broader ecological niches for their adaptability to changing seasonal patterns. Consequently, these species may have experienced greater success during migrations towards the equator, further contributing to already-high tropical biodiversity.

There are several key reasons for high biodiversity in tropical ecosystems. High NPP directly contributes to α-diversity by supporting more species with minimum viable populations, whereas enlarged populations of each organism increase overall mutation frequency and hence intraspecific genetic variation. Spatial heterogeneity within these habitats promote resource partitioning and niche specialisation. Continued reproductive isolation and divergence of deviating individuals from parent populations thus set the stage for intraspecific genetic variation to develop into new species along environmental gradients, enhancing β-diversity of these ecosystems. Finally, the niche conservatism hypothesis explains why tropical organisms remain largely restricted to their geographical origins, hence preserving the relative biodiversity richness of tropical ecosystems. A holistic understanding of contributing factors for hyperdiversity is essential to evaluate the challenges faced by these ecosystems amidst anthropogenic climate change.