Team Seas: How One Influencer Is Leading Efforts in Cleaning Up the Oceans 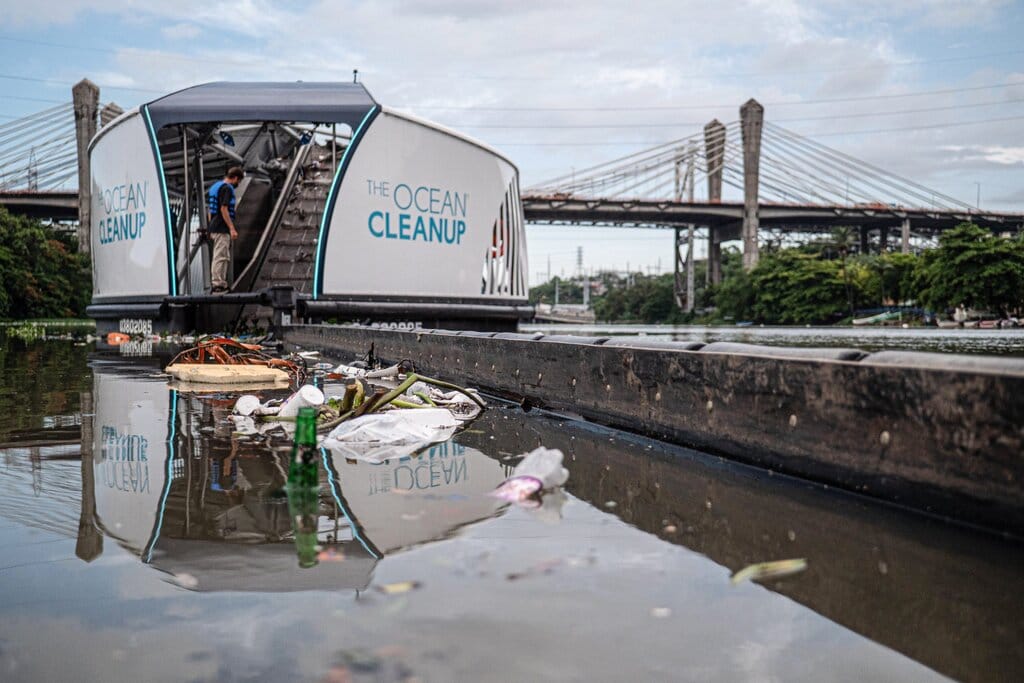 Social media has proven to have the power to connect and galvanise action as evident with youth climate protests and environmental campaigns. But one particular YouTuber was able to the platform and other social media content to raise significant awareness and funds for efforts in reforestation and cleaning up the oceans. Here’s how Team Seas managed to creatively engage and encourage millions to donate and take action in combating climate change and pollution.

For those who haven’t visited YouTube recently, there is an ongoing fundraising event for ocean cleanup that has gained support from thousands of people on the int

ernet, with more than thousands of social media content created to support and raise awareness about the issue.  The project in question is the Team Seas campaign, founded by YouTuber Mr Beast and Mark Rober. It is seen as the spiritual successor to Team Trees, a campaign which pledged to plan one tree for every dollar raised, and eventually helped raise $23 million. But with Team Seas, the plan is to remove all the plastic out of the world’s oceans with a fundraising goal of $30,000,000. Each dollar donated equals one pound of plastic removed from oceans, rivers, and/or beaches.

Content creators from 145 countries with more than 1 billion followers combined, including Dogecoin, which auctioned a piece of NFT art and donated all of its proceeds, as well as YouTube itself, have shown their support for this project, which have now raised more than USD$6.6 million donations – more than 20% of the campaign’s original goal.

Oceans are one of the most important ecosystems on the planet. They cover 70.8% of the Earth’s surface area, supporting food and livelihoods for people around the world. Oceans provide 70% of the world’s oxygen as they are home to 85% of the world’s plants, as well as important carbon sinks to help reduce global warming.

Marine ecosystems also have the highest extinction rate. It is known that cod stocks have been reduced by more than 90% in Canada’s east coast, while grouper in South Florida in the US have declined by 95%. According to the report of commercial fish species, if the fish population decline continues at this current rate, most fish species will be extinct by 2048.

On top of this, plastic waste continues to make its way into our already vulnerable oceans.  An estimated 200 million tons of plastic are currently circulating in the marine environment with 11 million tons of new trash entering the ocean each year. Scientists and environmentalists agree that there is an urgent need to reduce our plastic waste. And thus, Team Seas was launched.

Social Media as a Tool for Environmental Action

Top news headlines and scientific facts are not enough to engage younger audiences in environmental issues. What has proven effective, however, are videos, live streaming donations, and even memes. Especially Gen Z has grown up with climate change, many of which are ready to take action, and these social media platforms can help to spur more.

Mr Beast, whose real name is Jimmy Donaldson, started posting videos on YouTube at the age of 12, with content preliminary focussed on gaming. Since then, his channel has amassed over 48 million subscribers and over 9 billion views and is now one of the platform’s biggest and highest-paid stars. However, his environmental activism journey did not begin until 2019, when Donaldson’s channel hit 20 million subscribers, and a fan suggested that he could celebrate this win by “saving the earth for once”. This was followed by social media pressure proposing MrBeast to “plant 20 million trees for this special 20 million subscribers”.

These certainly got Donaldson’s attention, who eventually connected with one of his colleagues and former NASA engineer Mark Rober to come up with a plan to complete the challenge. Five months later, the Team Trees project was officially launched, with the help of the Arbor Day Foundation, a nonprofit conservation organisation. Each dollar donated to the project would equal one tree being planted.

Since its official launch, the campaign has raised 23 million, among the donors are celebrities and major internet influencers such as Twitter CEO Jack Dorsey and beauty expert Jeffree Star. But the largest contribution comes from Tesla CEO Elon Musk, who donated $1 million to the project, whose action brought even more attention to the campaign.

“This is the first time we’ve seen donations reach $8 million so quickly,”  Mr Nelson, a representative of the Arbor Day Foundation said. “It just needs to go viral and get many small donations from people, the act will make a lot of people feel better.”

Up to 2022, Team Trees  has planted more than 23,000,000 trees across the world including the United States, Canada, Haiti, Nicaragua, Kenya, Madagascar, Indonesia, and Nepal.

Following the success of the Team Trees, Donaldson has partnered with the two of largest ocean conservation non-profits in the US, Ocean Conservancy and the Ocean Cleanup, for his endeavour. The project Team Seas was eventually launched in October 2021, with a video showcasing Donaldson and a team of volunteers from Ocean Conservancy cleaning the contaminated beaches of Bajos de Haina, Dominican Republic. The launch was accompanied by a film illustrating how and why waste from under-served neighbourhoods finds up in rivers, as well as a description of the government’s and the United Nations’ efforts to reduce marine pollution.

Just like its predecessor, Team Seas received significant public attention, with over a thousand influencers from 145 countries creating content about the fundraiser, ranging from challenges and ASMR, to reaction and explanatory videos about the importance of ocean protection. The Team Seas marketing team itself continuously engages young audiences in creative ways across social media platforms including Facebook, Instagram, Twitter and Reddit. 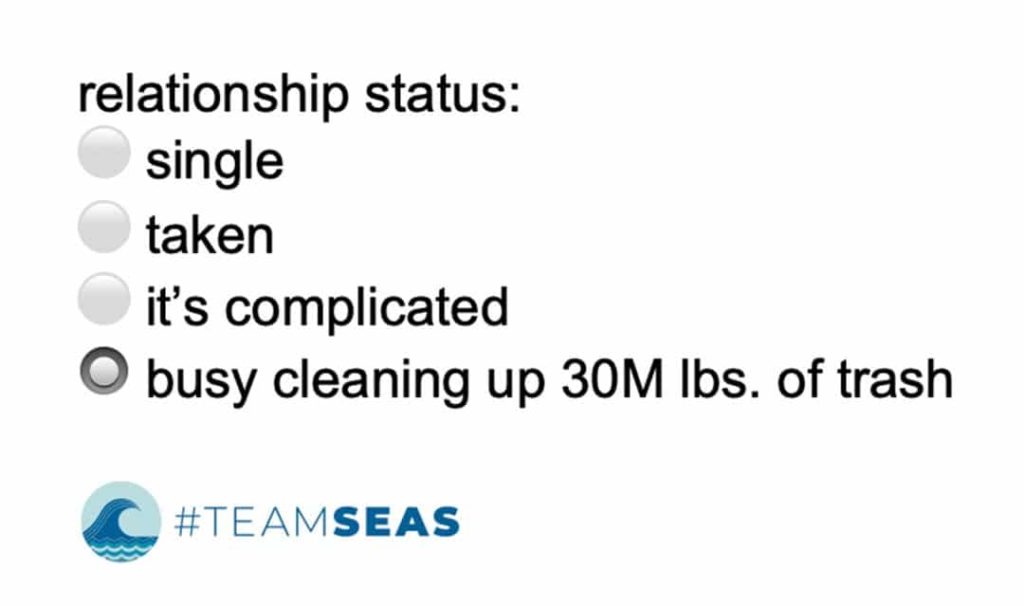 An example of how Team Seas creatively engages with audience on its social media platforms. Source: Team Seas FB page

The campaign has successfully met its target and raised more than 30 million by the end of 2021, and continues to take donations in hopes of carrying on removing more plastic waste from the world’s oceans and rivers.

The power of young generations and social media platforms to unite people to help and donate to a greater cause couldn’t be demonstrated more perfectly than this project. Going viral, starting online trends, and creating memes or funny tweets might seem childish, but putting a purpose behind it can drive real changes.

The Legitimacy of Team Seas’ Efforts

Some might question whether the legitimacy of the campaign, and whether the significant funds that have been raised is truly directed back into ocean cleanup efforts. Here are three factors that could dispel those arguments.

Ocean Conservatory is a nonprofit environmental advocacy group based in Washington DC in the United States, which helps formulate ocean policy at the federal and state government levels based on peer-reviewed science. Since this first cleanup, Ocean Conservancy has helped to pick up over 300 million pounds of trash from the ocean. Team Seas works with Ocean Conservancy and its partners to collect millions of pounds of plastic and rubbish from beaches all around the world with the help of volunteers. Professional crews are also dispatched to clean up some of the world’s most iconic and fragile seascapes. The organisation provides the team with the best available science and collaborates with its International Coastal Cleanup local partners around the world to identify places where cleanups will have the greatest impact.

The project’s other main partner is The Ocean Cleanup, a nonprofit engineering environmental organisation based in the Netherlands that develops technology to extract plastic pollution from the oceans and intercept it in rivers before it can reach the ocean. In late October 2019, they announced a new initiative, the Interceptor, to tackle the trash problem closer to the source, with plans to prevent 80% of riverine trash coming from 1000 rivers worldwide.The Ocean Cleanup also works with its Global Ghost Gear Initiative® members and partners on the sea to discover ghost gear graveyards across the world to aid the Team Sea campaign. The gear will be grappled or float to the surface, where it will be hooked onto boat cranes and hoisted out of the ocean by specially trained personnel. Following that, Team Seas will work with local authorities to ensure that any labelled, functional gear is returned to local fishermen. When possible, the remaining equipment will be recycled, and the remainder will be properly disposed of.

All the donations made by every individual are available on the website with their registered name, amount of money donated, and short messages. They also take cryptocurrency, making it more Gen Z-friendly. Donations start from USD$5 (equivalent to five pounds of trash removed). Cryptocurrency Dogecoin has also enabled donations through its platform and is auctioning a piece of NFT art, with all proceeds donated to the project. 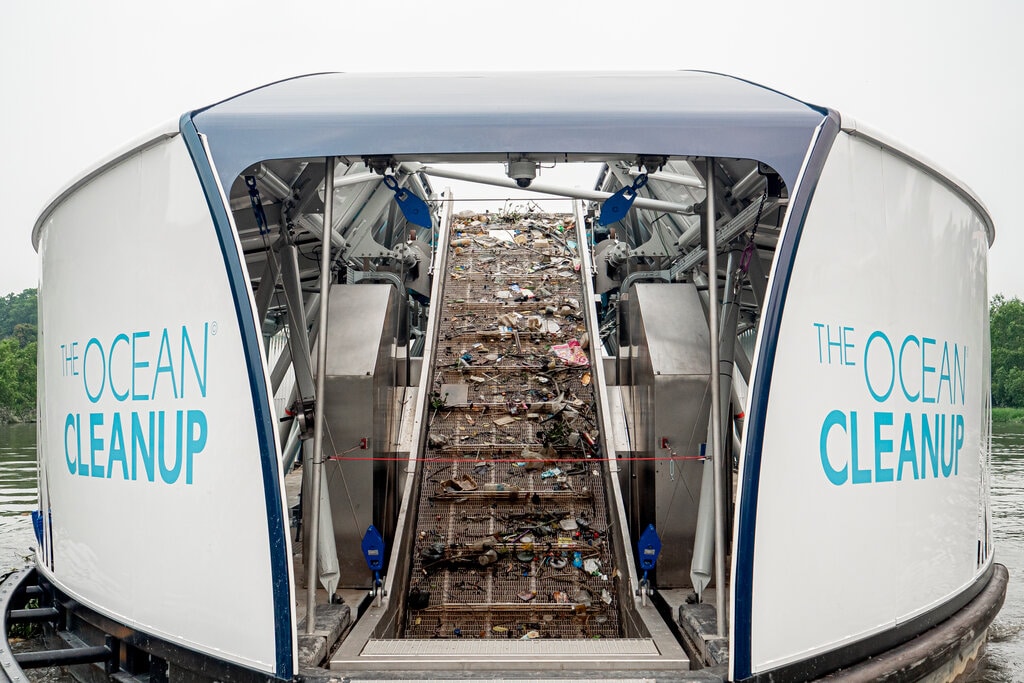 The Interceptor, a super waste-eating robot, was the starting point for the project and is the main tool used to collect and remove plastic waste from the oceans. Team Seas co-founder and former NASA engineer, Mark Rober employs the Interceptor to collect trash without the need for human interaction.

Waste that is drifting down a river or around the shoreline is collected by a barrier that extends from the robot’s base once it is moored to a point on the shore. This barrier allows marine species to freely swim through and beneath it, but it catches anything floating near the surface of the water and loads it onto a conveyor belt. Anything captured on the conveyor belt is subsequently placed into one of four floating trash cans, where it is recycled or properly disposed of.

Featured image by: The Ocean Cleanup