The Indonesia Omnibus Law: Prioritising Economic Growth at the Expense of the Environment 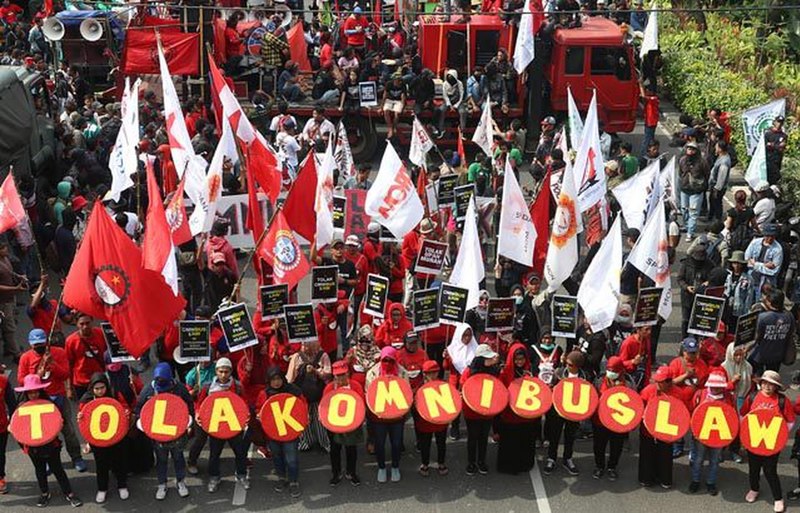 In early October, the House of Representatives in Indonesia, under the Presidency of Joko Widodo, passed the controversial Omnibus Law, amending 79 existing laws in one single bill. The legislation has been widely unpopular and has been heavily criticised by civil organisations, environmental groups and trade unions, causing massive protests in more than three dozen cities. The Omnibus Law is intended to boost Indonesia’s economy and create jobs by simplifying business permits and easing foreign investment restrictions, however, it does so at the expense of worker’s rights and environmental protections and could cause greater deforestation and biodiversity loss.

How Does the Omnibus Law Affect Indonesia’s Environment?

Among the most controversial articles of the Omnibus Law is the repeal of the current regulation requiring at least 30% of forest area to be conserved for each watershed area or island. According to the environmental NGO Madani, this removal opens the door for massive deforestation and can exacerbate the effects of natural disasters in a country already prone to floods, droughts and earthquakes.

The Omnibus Law also eases the requirements for businesses to carry out environmental impact assessments as a precondition to obtaining a business license and limits public consultation to only those who are directly affected by the specific project. Ultimately, this can lead to the issuance of business permits to companies that neglect the environment. It also prevents environmental organisations and members of the community that are more aware of the environmental impact from objecting to the project, since they may not be directly impacted.

Another significant amendment is the removal of the strict liability principle from the Forestry and Environmental Law, making it harder to prove and prosecute companies that set fire to their land in order to clear it for commercial purposes. According to Greenpeace, such practices, especially for palm oil plantations, have already burned 4.4 million hectares between 2015 and 2019 in Indonesia. The removal of the strict liability principle may ultimately lead to an increase in the conversion of rainforest to plantations, greenhouse emissions and endangerment of species, including the Sumatran orangutan.

The introduction of the Omnibus Law jeopardises the significant environmental improvements Indonesia has achieved in the past several years. Since 2017, deforestation in the country has declined from one million acres a year to fewer than 250 000 acres a year, due in large part to the approval of more sustainable governmental policies, such as the moratorium on forest clearance and the commitment of 83% of palm oil refineries in Indonesia and Malaysia to the No Deforestation, No Peat, No Exploitation (NDPE) practices.

The Omnibus Law May Deter Investors From the Indonesian Market

While the Omnibus Law aims to spur more domestic and foreign investment in the country, it contravenes the current investment trend towards sustainability and may ultimately deter investors. Within this context, 36 institutional investors managing USD$4.1 trillion signed an open letter highlighting their concerns regarding the environmental impact of the Omnibus Law. Additionally, the EU recently launched a public consultation on its initiative to reduce its contribution to deforestation worldwide, promoting the consumption of products sourced from deforestation-free supply chains.

Lastly, the Omnibus Law stands in stark contrast to the growing global demand for sustainable commodities and the increased commitment by investors to incorporate environmental, social and corporate governance (ESG) into their investment decisions.

The government of Indonesia has lost an opportunity to strengthen its economy while protecting its natural resources, jeopardising the mid and long-term development of the country in a world where sustainable practices are becoming significantly more important.