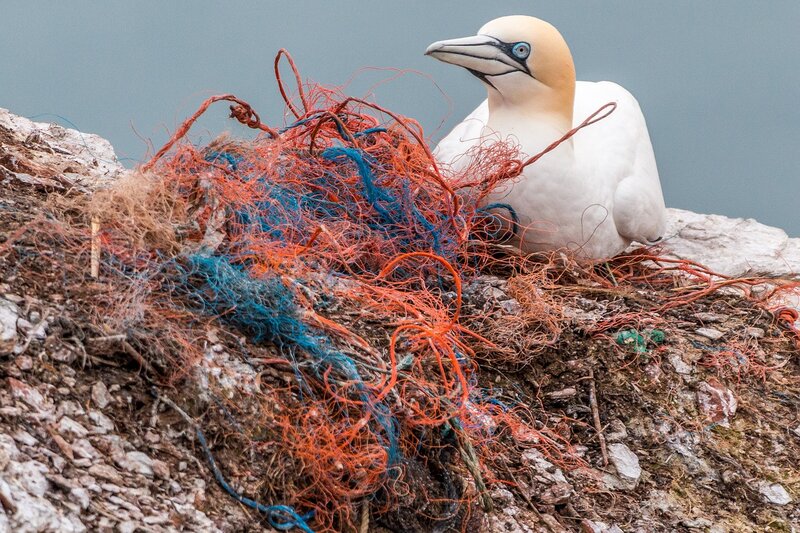 Recent figures from the WWF indicate that between 500 000 and one million tons of ghost fishing equipment are abandoned in the ocean each year. Ghost nets are lost, abandoned or discarded fishing gear left by fishermen. The proliferation of discarded ghost nets is a major issue for marine life and sea habitats, as well as the commercial fishing industry and marine vessels themselves. It is estimated that ghost nets make up 46% of the Great Pacific Garbage Patch (now 1.6 million square km in size, three times that of France) and up to 10% of all marine litter.

Ghost nets are made from a range of synthetic fibers, nylon and other plastic compounds and are able to travel vast distances once lost or abandoned. The most common type of ghost net is called a gillnet (also referred to as a driftnet) which, if exceeding 2.5km in length, have been banned within international waters by the UN since 1992. Gillnets are used on top of the water’s surface as well as on the seabed, acting like a wall in which fish and other marine life become quickly entangled. There are also pots and other box-like traps. Fish Aggregating Devices (FADs) are typically bamboo netting with buoys attached, and are used beneath a fishing boat to trap extra catch. Purse seine netting, named for its purse-like structure, works to envelop schools of fish, pulled to the surface at the right moment. Trawling involves large volumes of netting being pulled along the back of a heavy boat. Due to the nature of this practice, netting can become easily caught at the bottom of the ocean. Fish cages, wiring and hooks are also classified as ghost fishing equipment.

Ghost nets are a threat to a multitude of ocean species, big and small: Ghost nets don’t only catch fish; they also entangle sea turtles, dolphins, porpoises, birds, sharks and seals. These animals swim into nets, often unable to detect them, and either sustain injuries or are drowned or suffocated. In 2018, it was reported that up to 650 000 marine animals are killed by ghost nets every year. If the animal is lucky enough to escape, it may still die from its injuries. Often these tragic circumstances cause a long, painful death. If the ghost net is caught on the seabed, smaller ocean creatures begin feeding on the dead catch in the nets, reducing its weight and allowing the netting to float up to the surface again. This in turn creates a destructive cycle.

Figures indicate that over 40 000 tons of gillnets are abandoned every year in South Korean waters (where the netting is particularly popular) each year. In the North-East Atlantic, 25 000 ghost nets are discarded each year – totalling up to 1 250km in length. Between 2014 and 2015, volunteers retrieved marked ghost nets that travelled 4 700km from Maine, USA to the Cornish coast in England, totalling 51 tonnes of netting. 7 000km worth of gillnets are lost in the Atlantic Ocean annually, while in the United Arab Emirates, 260 000 traps are lost yearly and 250 000 in the Gulf of Mexico. A 12-month study in Thailand waters showed that 96% of tangled animals were non-targets for fishermen. Finally, between 2004 and 2015, 13 000 ghost nets were removed from the northern coast of Australia.

It takes approximately 600-800 years on average for ghost fishing nets to naturally decompose.

Seals and sea lions are particularly vulnerable, according to the WWF report, finding that 1 500 Australian sea lions die annually due to entanglement; 53% of these entanglements between 1997 and 2002 involved pups. In 2018, more than 300 300 dead olive ridley sea turtles were spotted off the coast of Mexico. It was determined that they died from hooks and nets. Further, more than 80% of Indian Ocean dolphins have been killed from gillnets, classified as ‘by-catch’ while fishermen were fishing for tuna. Also, the Vaquita (the most critically endangered ocean species) is facing imminent extinction due to illegal fishing in the Sea of Cortez, the one place where vaquitas are found. However, they are collateral in the search for the Totoaba fish, highly desired for its medicinal properties. As of March 2020, there are only ten remaining Vaquita in the ocean.

In October last year, a pregnant minke whale was found beached on the coast of Scotland with ghost netting knotted in its mouth. Representatives from Scottish Marine Animal Stranding Scheme said, “It looked like it had become recently entangled in a section of discarded or lost fishing net – this had become jammed in the baleen and then dragged behind the animal. This would have hugely impaired the animal from feeding or swimming normally, and likely led to an exhausting last few hours of life. Based on the flank bruising and lungs, it appears this creature live stranded and drowned in the surfline.”

Abandoned ghost nets are also doing considerable damage to marine habitats. This is because the netting has a smothering effect on reefs and consequently attracts invasive species, disease and parasites to coral reefs, causing long-term damage to the ecosystem. Damage to habitats can also occur when trawling and lobster pots (netted cages designed to capture a range of crustaceans) destroy fragile coral during strong currents and storms.

The benthos– ocean bottom regions- are also susceptible to the impacts from discarded fishing gear and ghost fishing. Discarded fishing gear, especially trap gear, sinks to the bottom where it can smother organisms that live on top of and just below the sediments, like seagrasses, crabs, and worms. These harmful practices are counterproductive to fishermen, who will ultimately suffer the consequences of destroying marine ecosystems as their catches will be affected. It is estimated that 53% of the world’s fisheries are fully exploited, while a further 32% are considered to be overexploited or recovering from overexploitation. Ghost fishing nets are left in the sea for a variety of reasons. Gear may be abandoned when fishermen cannot retrieve the net due to it snagging on rocks and coral on the seabed. Some fishing vessels cannot afford to retrieve stuck gear. Fishing nets are considered lost when marker buoys become detached or if heavy tides remove netting from its original location of deployment. Retrieval becomes especially difficult if the vessel does not use GPS technology. Sometimes ghost nets are abandoned deliberately due to poor on-shore facilitation for disposal as well as high disposal costs. Additionally, if an illegal fishing vessel is in danger of being caught, nets may be cut off or thrown overboard.

There are a great number of solutions and technological measures that have been implemented to help retrieve ghost nets – if used more broadly with government support, the clean-up process could be more efficient and widespread. Producing nets with biodegradable components could shorten the time that abandoned gear is left intact in the ocean. Project NetTag is working on a special underwater acoustic transponder for fishermen to secure to their gear. About the size of a matchbox, these transponders have batteries similar to smartphones, but use circuitry which requires very low power, which means they can operate for many months attached to a net. Another European project called MarGnet has been researching the effectiveness of a sonar device which is attached to the seabed to decipher pollution hot-spots through generating an 360 degree underwater map which is then investigated by diving teams. Underwater drones such as Deep Trekker’s Remote Operated Vehicles (ROVs) are able to operate in extreme weather conditions and are a useful tool in locating ghost nets. In 2015, a WWF-led search along the Baltic Sea resulted in 268 tons of ghost fishing gear being removed from the ocean. There are plenty of other examples of grassroot clean-up of missions.

Governments across the world should do more to remove ghost nets and clamp down on illegal fishing. World Animal Protection has formed a Global Ghost Gear Initiative that calls for an alliance of governments and organisations to share data, resources and education on the issue as well as coordinate search efforts. The United Nations Convention on the Law of the Sea (UNCLOS) underpin the rules and legalities of human activity at sea, but WWF says that more action must be taken to apply these regulations. Article 194 of the convention provides for state regulation of fishing gear by providing the licensing of fishing equipment used in waters under national jurisdiction. However, implementation and enforcement should be strengthened at the global, regional and national levels, including through the adoption of adequate implementing legislation. In 2009, the European Community Council Regulation enforced a law stating that fishermen are obligated to retrieve and report lost netting. However, Greek fisherman Vannis Athinaios has witnessed this law being ignored: “The law is not enforced. Most of us have equipment like GPS and plotters. Big boats have advanced equipment and crews of divers to track lost gear down, but they don’t do it because they can make €6,000, the cost say, of a lost net on any given day.”  In 2008, The FAO Committee on Fisheries set guidelines for marking fishing gear, however they are voluntary. Elizabeth Hogan of Oceans and Wildlife with World Animal Protection says that governments should take the matter more seriously, “This would not only result in loss prevention by responsible fisheries, it would also help stop illegal fishing (IUU), which accounts for intentionally discarded gear (typically abandoned at sea to avoid detection). IUU fishing costs the global economy US$20 billion annually. Marked gear would help authorities track illegal fishing activity and bring criminals to justice.”

Overall, more awareness and education needs to be provided to better communicate the pervasiveness, danger and durability of ghost fishing equipment within our oceans. With ghost nets dubbed the ‘silent killers’ of the sea, the problem can only be addressed if governments come together on a world-wide level and work collectively to reduce unnecessary marine-life deaths. As of now, 16 governments have joined forces to achieve the goals of the Global Ghost Gear Initiative. If more governments make a commitment to carefully enforce strict rules and regulations to rid the oceans of this marine litter, this would be a great step in helping to establish much healthier oceans and safer marine life.