3 Lessons from Waste Management Solutions from Around the World 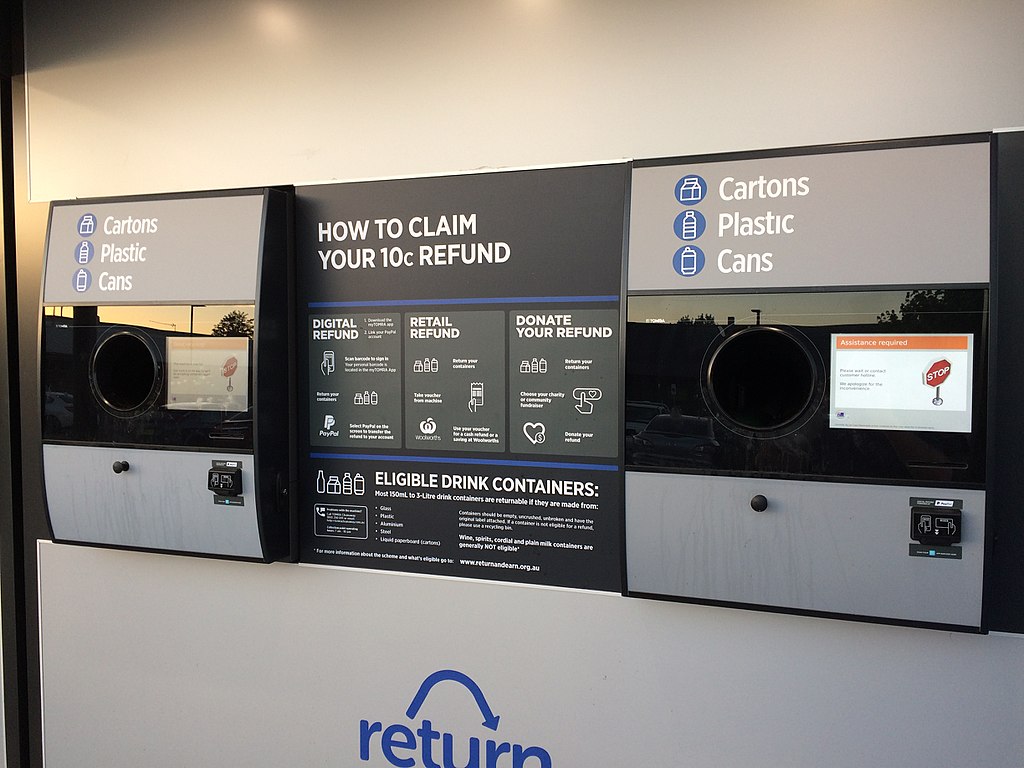 More waste, less recycling. Hong Kong has been dealing with a serious waste issue for years and the problem seems to get worse year by year. While per capita trash disposal rates have been growing at a rapid pace, the recycling rate has steadily decreased. In August 2021, the Hong Kong Legislative Council passed the long-awaited Waste Charging Scheme: it is hoped that this move will help reduce per capita waste disposal by up to 45% and increase recycling rate by 55% at the same time. Since the new scheme will not start until 2023, let’s take a look at some of the most successful recycling strategies and waste management solutions in cities and countries around the world.

It took nearly two decades for the Hong Kong Legislative Council to pass the city’s first waste disposal bill. The move aims to counteract the massive waste problem that the city is facing. Indeed, waste production rates across the territory have been steadily increasing over the last decades, and especially during the pandemic the city has seen a rapid surge in trash generation, as the use of single-use items such as masks and take-out plastic containers has skyrocketed. Even though the new scheme is a good step towards the right direction, more needs to be done in order to reverse the dangerous path that Hong Kong’s waste problem is taking.

While we wait to see what effect the new waste charging scheme will have on the territory, we thought it would be a good idea to explore some of the world’s most successful strategies that cities or entire countries have adopted in recent years to decrease municipal waste production and improve its management.

The EU Directive on Single-Use Plastics

Enacted in July 2021, the Single-Use Plastic Directive promotes the transition to a circular economy by banning the use of single-use plastics across all countries of the European Union, including cutleries, plates, cotton buds, straws, and balloon sticks. The Directive also aims at reducing the use of certain types of single-use plastics through Extended Producer Responsibility (EPR) schemes: these require companies producing packaging such as wrappers, wipes, and tobacco products, to cover the costs for its collection, sorting, and recycling after use. Member States must also restrict the use of food and beverage packaging from the catering and takeaway services. Lastly, the Directive introduced stringent rules regarding plastic bottles production and collection, setting specific standards for the design of bottles and containers so that they are easier to recycle as well as for the labelling on them, which has to indicate the product’s environmental impact as well as clear and concise instructions on how to properly dispose it. 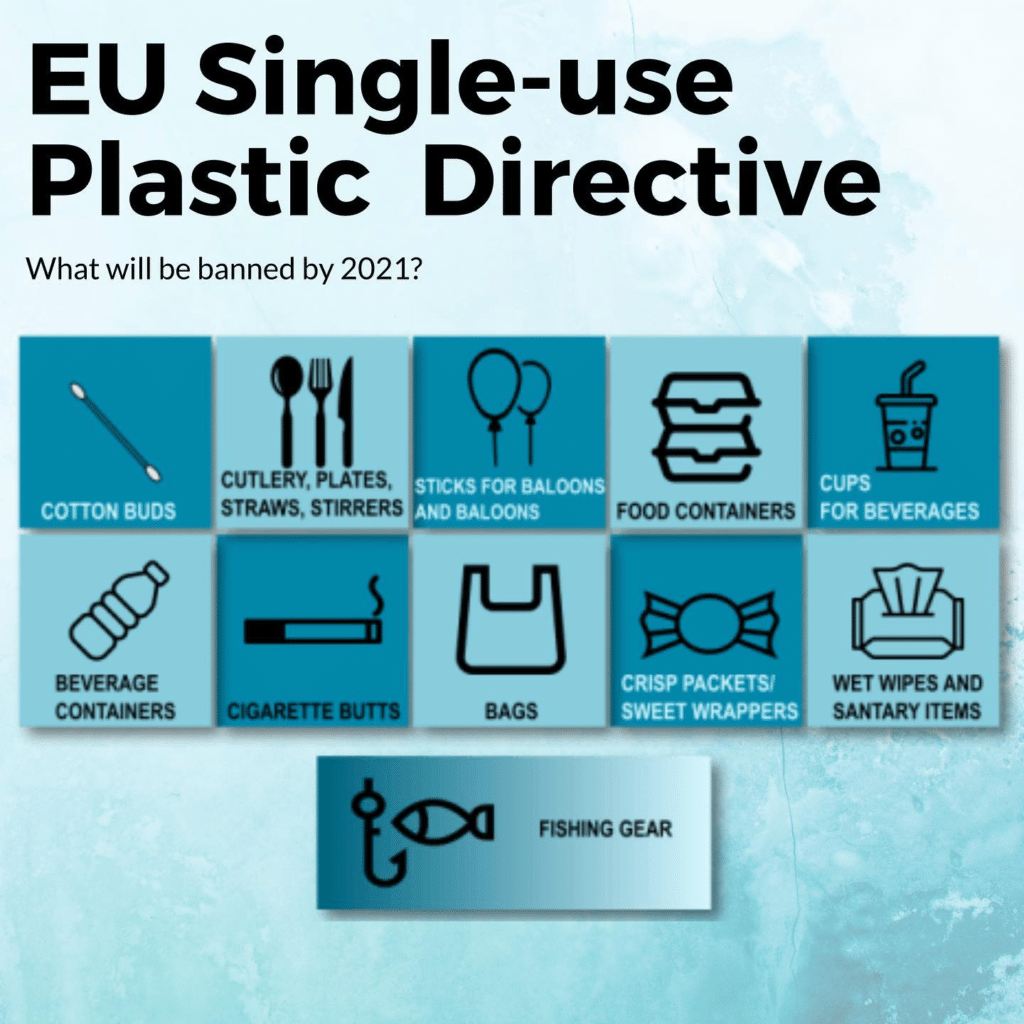 Hong Kong’s waste management solutions are also based on a Producer Responsibility Scheme (PRS) and includes mandatory ordinances such as the Plastic Shopping Bag Charging Scheme, which was fully implemented in 2015, as well as PRS on Waste Electrical and Electronic Equipment, a scheme that as launched three years later, which forces suppliers of electrical products such as air-conditioners, refrigerators, washing machines, televisions, and computers to pay recycling levies as well as providing recycling labels when distributing electrical equipment. Furthermore, in July 2021, the Environmental Protection Department (EPD) launched a public consultation on the Scheme on the Regulation of Disposable Plastic Tableware inspired by the recent action taken by the EU, mainland China, and Australia and proposed a stricter regulation of disposable EPS tableware, a ban on the provision of disposable plastic tableware for dine-in services, along with straws, plates and cutlery for takeaway services. The move is surely a step in the right direction. However, the current scheme does not provide concrete targets and it is not sure if and when such policies will be enforced. 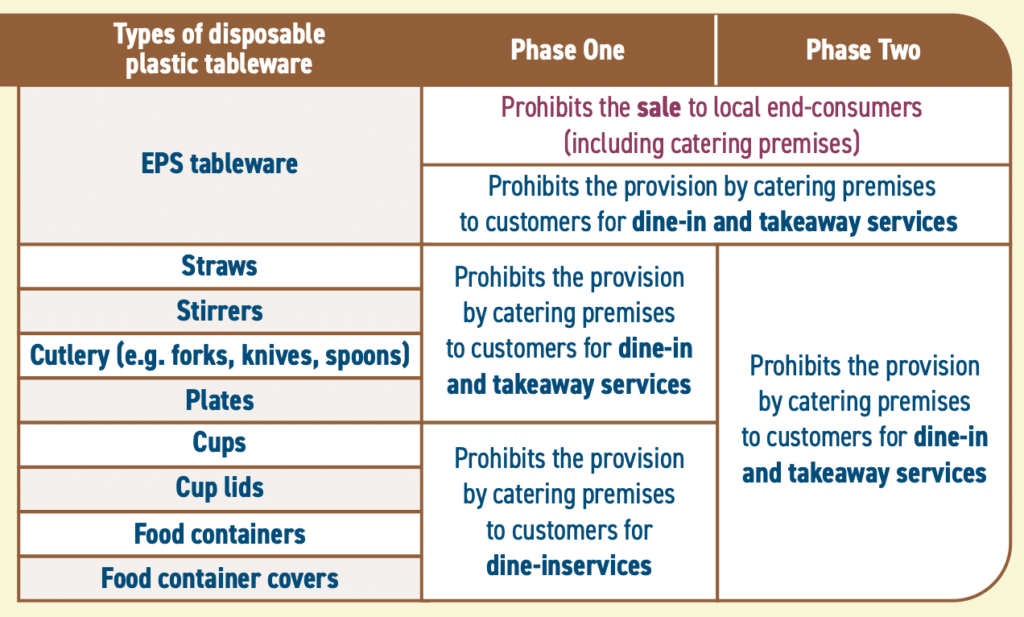 You might also like: The Hong Kong Waste Charging Scheme is a Good First Step, But More is Needed

Several North American states, south Australia, as well as 10 European countries have so far implemented a Deposit Refund System (DRS), one of the few extremely effective waste management solutions to incentivise consumers to recycle beverage bottles, mainly but not limited to plastic bottles. The scheme has proved to be successful in increasing these countries’ recycling rates, sometimes even bringing them up to almost 100%. Successful examples are countries such as Germany, which has reached an outstanding 98.4% of total return rate since the implementation of the scheme, and Norway, where 97% of all plastic bottles are recycled.

The system is straight forward: when purchasing certain bottles, consumers pay a deposit, which is reimbursed once the empty bottle is returned to a retail outlet. In Germany, for example, the deposit usually ranges between €0.08 and €0.25. “One-way” plastic bottles are in the higher price range, while the deposit for reusable glass and plastic bottles usually does not exceed  €0.15. The difference in price is a strategic way to encourage people to return especially these environmentally damaging plastics: indeed, having paid a higher deposit for non-reusable bottles, the consumer is particularly incentivised to bring it back once empty. Furthermore, making plastic bottles pricier is also a way to make them less attractive products to buy altogether.

Even though results differ in every country, DRS is undoubtedly a successful waste management solution and can have an overwhelmingly positive impact on waste production. They are proving to be particularly efficient in reducing littering generation, increasing bottle recycling as well as helping industries and consumers to develop a more responsible and sustainable mindset, in line with the polluter-pays principle such scheme is based on. 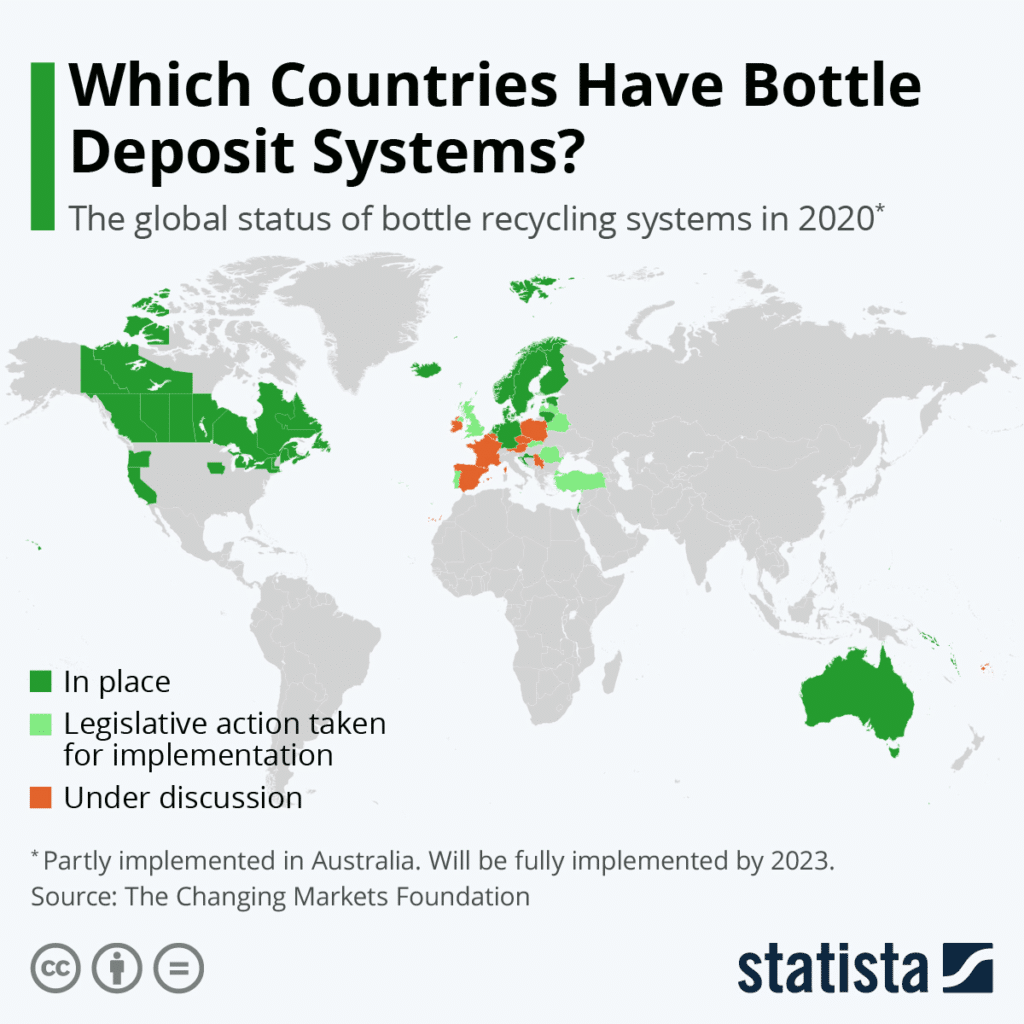 Countries that have a Deposit Refund Scheme (DFS). Source: Statista.

In recent years, many US cities started implementing policies to recycle and compost more to help tackle the massive waste problem that the country is facing. At the forefront of what is now known as the “zero waste movement” is one of California’s most populous cities, San Francisco. In 2009, the city passed an ordinance requiring all residents and businesses to sort their waste into recyclables, compostables and landfill trash, making it the first American city to make composting mandatory. When one thinks of recycling, materials such as plastic and glass usually come to mind. However, organic matter can be recycled, too: yard trimmings, food scraps and other types of organic waste can be composted and turned into extremely valuable fertiliser for the soil. Waste management solutions such as this process can be highly beneficial for the environment, as it helps drastically reduce carbon emissions into the atmosphere, improve the soil’s health as well as mitigate the harsh impact of droughts on the land.

Considering that almost one third of the food produced for human consumption, nearly 1.3 billion tonnes goes to waste every year worldwide. Composting would have massive benefits and it would ultimately contribute to cutting down on the overall trash. Food waste is a big issue in Hong Kong, too. According to Feeding Hong Kong, over 3,600 tonnes of food waste are sent to landfill every day here. Introducing large-scale composting facilities such as the one in San Francisco would help divert this huge amount of food waste away from Hong Kong’s oversaturated landfills, which would then be reused to create enormous amounts of nutrient-rich fertiliser. Indeed, in the case of San Francisco, the introduction of compost, along with other waste regulation policies, financial incentives, and extensive multilingual outreach to residents and businesses, allowed the city to divert more than 80% of all discarded waste from landfills, making huge steps towards its goal to become the world’s first zero-waste.

Cutting out the use of single-use plastics, regulating the disposal of bottles, incentivising waste sorting and promoting compost are all great approaches to waste management solutions. However, for the waste problem there is no silver bullet. That is why it is of utmost importance that, according to its own resources and needs, each country starts taking action to solve the huge problem that waste is for the environment. Nations must find  the right approach and must consequently implement policies to reduce the amount of trash produced and efficiently deal with its management.