What is the Nagoya Protocol? 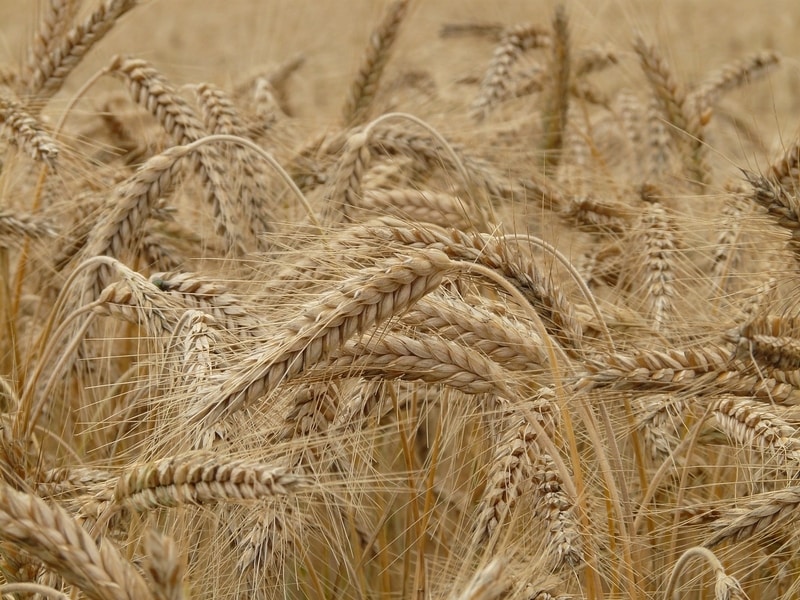 The Nagoya Protocol on Access to Genetic Resources and the Fair and Equitable Sharing of Benefits Arising from their Utilization to the Convention on Biological Diversity is an international agreement created by the United Nations (UN) that equitably shares the benefits of genetically modified organisms. The Nagoya Protocol is related to biodiversity protection and is one of two protocols that allow ambitious biodiversity goals to be efficiently achieved.

The Nagoya Protocol is an international agreement that acts as a legally binding instrument to set regulations on access and benefit sharing (ABS) in biological diversity. As a supplementary agreement to the Convention on Biological Diversity (CBD), it provides a legal framework to effectively implement CBD’s aim of “fair and equitable sharing of benefits arising out of the utilisation of genetic resources.” The Nagoya Protocol specifically focuses on building greater legal certainty and transparency for those who provide and use genetic resources. The protocol was adopted in October 2010 and entered into force in October 2014, aiming to create an equitable distribution of the benefits of utilising genetic resources.

How Many Parties are There in the Nagoya Protocol?

The countries part of the Nagoya Protocol can be seen below. There are currently 131 ratified parties (132 ratifications) of the Nagoya Protocol. Parties to the protocol include Afghanistan, Botswana, China, South Africa and the UK. The countries in dark green represent those that were among the first to ratify it, while the later dates of ratification are shown in darkening shades of red. According to the CBD Convention on Biological Diversity ‘ratification’ signifies ‘the consent of a State to be bound by a treaty’. 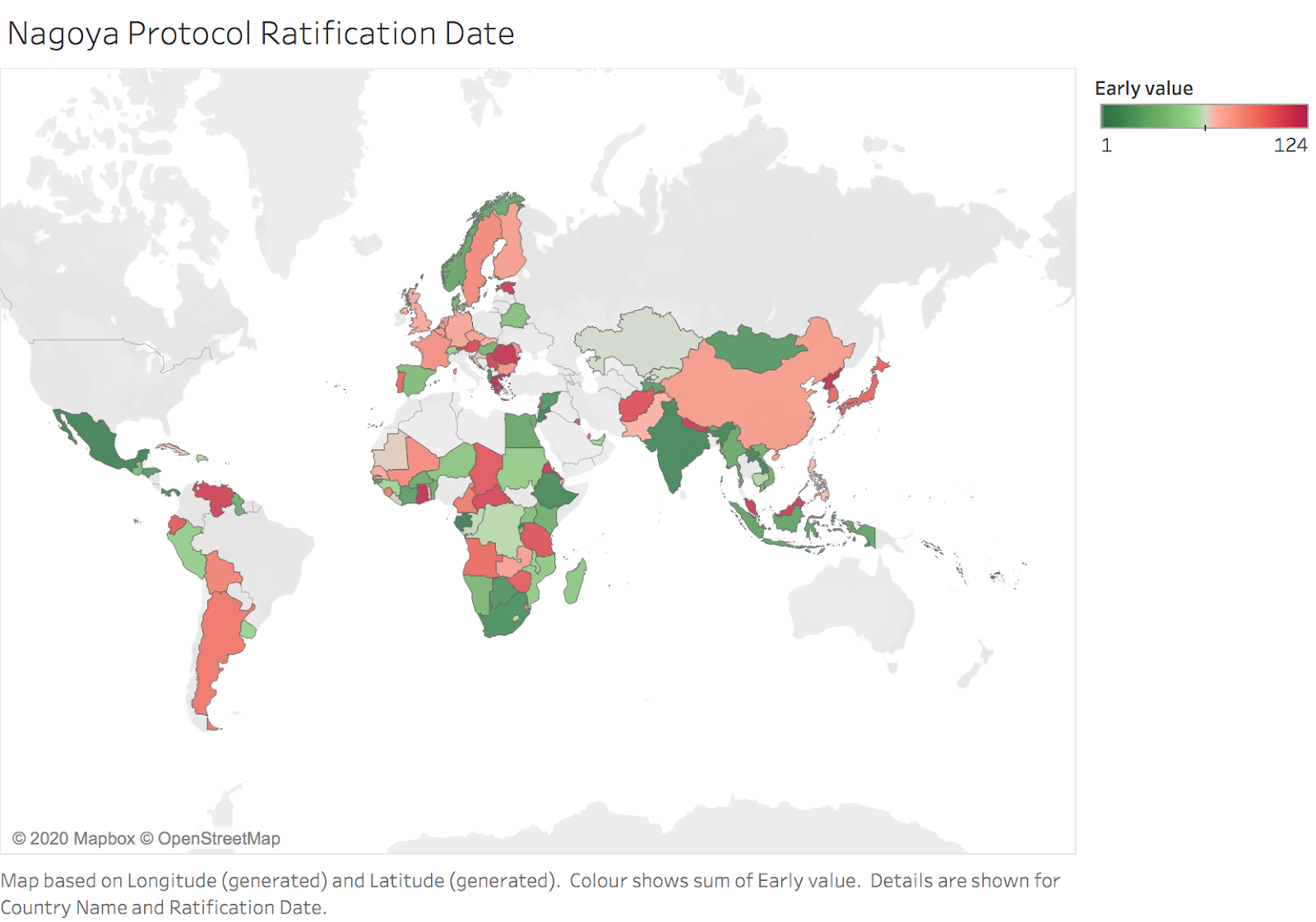 However, in order to fully understand the extent of the work that has been created by the United Nations, the existing framework, that most are not aware of, must be discussed.

Convention on Biological Diversity and the Strategic Plan for 2011-2020

The Nagoya Protocol is headed up by the Convention on Biological Diversity, an international legal instrument, facing penalties from the UN if the rules of compliance are broken. The agreement expects to cover “all possible domains that are directly or indirectly related to biodiversity and its role in development.” The convention acts as a multilateral treaty that has three aims:

In order to achieve these broad aims, the Convention created the Strategic Plan for the years 2011-2020. The plan includes a shared vision among parties and national targets to be implemented as policy instruments for greater effectiveness.

This vision says, “By 2050, biodiversity is valued, conserved, restored and wisely used, maintaining ecosystem services, sustaining a healthy planet and delivering benefits essential for all people.”

The vision itself contains a large focus on reintroducing an affinity or connection to nature that has been lost. In a study conducted by Kals, Schumacher and Montada, an emotional connection towards nature has an impact on behaviour. One of the study’s conclusions was that affinity is a powerful indicator of nature-protective behaviour, which the Strategic Plan vision aims to improve.

In order to achieve these ambitious goals, the Convention on Biological Diversity created two protocols that enabled the Convention to administrate the increase in biodiversity internationally in a formal agreement.

Framework and Scope of the Nagoya Protocol

The first is the Nagoya Protocol. Entering into force in 2014, the Nagoya Protocol allows a transparent legal structure to ensure that the benefits from using genetic resources are shared. Its importance stretches beyond sharing modified products but allows the benefits of resources to be distributed with confidence and transparency. The protocol promotes conditions that encourage research on the sustainable use of genetic products. These resources may improve future food security or agricultural efficiency.

Perhaps most importantly, the protocol allows researchers to pool knowledge and allow technological transfer. This alone is invaluable, in a world where maximising limited resources is quickly becoming the name of the game.

Any sharing of biological resources is monitored by researchers who overlook the protocol ensuring that, for example, if a new plant was introduced into a new country, it would not take over and destroy the native plants. The protocol would ensure that the potential impact would be researched before.

Further, if any profits are made by, for example, selling a traditional medicine, it will be split between those who distributed the medicine and those indigenous people who created it.

The protocol may prove influential in ensuring progress towards at least the seventh and eighth Millennium Development Goals: improving environmental sustainability and developing a global partnership for development.

Its obligations include taking measures to ensure that genetic resources utilised within jurisdictions are accessed with prior consent, cooperation in cases of alleged violation of another party’s requirements and taking measures to monitor the utilisation of genetic resources after they leave a country including by designating effective checkpoints at any stage of the value-chain: research, development, innovation, pre-commercialisation or commercialisation

Convention on Biological Diversity and the Cartagena Protocol

The second protocol created from the Strategic Plans for the years 2011-2020 is the Cartagena Protocol, which focuses on biosafety, including the safe handling and use of ‘living modified organisms resulting from modern biotechnology that may have adverse effects on biological diversity, taking also into account risks to human health’.

The CBD defines a modified organism as one which contains a “novel combination of genetic material obtained through the use of modern biotechnology,” surveying the transboundary movement of genetically modified products.

Effectiveness of the Nagoya Protocol

The effectiveness of the Nagoya Protocol was showcased with the International Cooperative Biodiversity Group working on the Sustainable use of Biodiversity in Papua New Guinea Project. The task completed scientific research which focused on the biological chemical and medicinal properties of the biodiversity within Papua New Guinea. The research resulted in over 500 species of herbarium species being deposited in local herbariums. Additional projects using these species led to the creation of a new antivenom by the Australian Venom Research Unit. The commercialisation of this product meant that the benefits were shared with all parties, including the people who designed the traditional medicine.

Thus, the Nagoya Protocol holds undeniable importance in attempting to achieve the Millennium Development Goals, ensuring that the benefits of genetically modified products are distributed equitably between all parties.