What Satellite Imagery Tells Us About Methane Emissions in Greenland 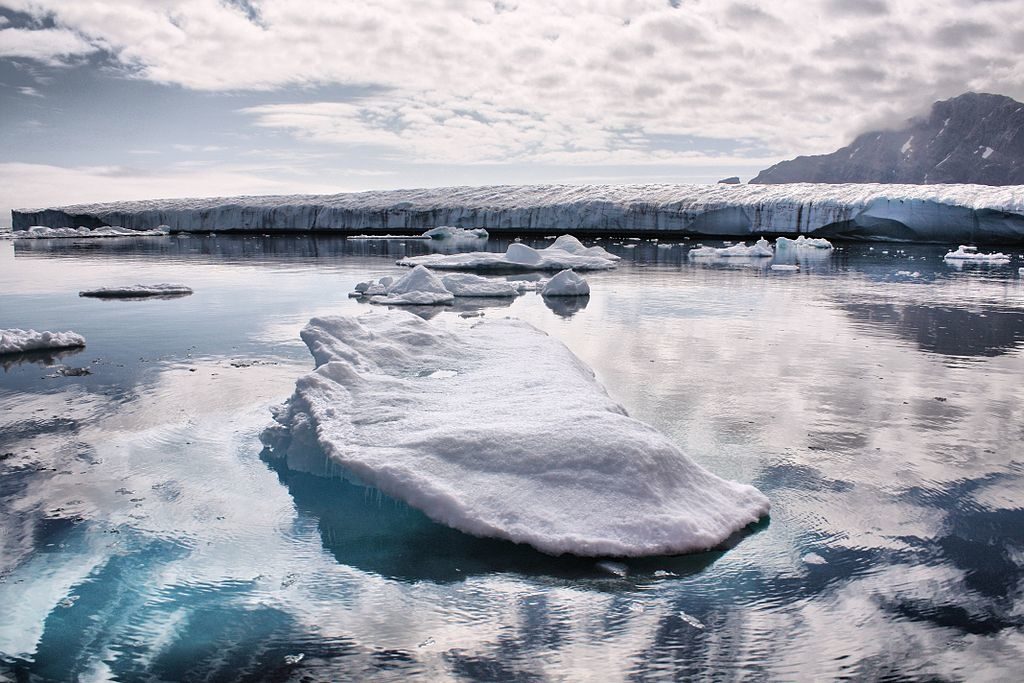 Earth.Org analysed satellite data to assess the concentration of methane emissions in the Greenland ice sheet (GiS) in July 2019. The GiS covers an area of roughly 1,7million square km; together with Antarctica’s ice sheet, it contains more than 99% of the world’s fresh water. Most of this water is frozen in masses of snow and ice and as greenhouse gases build, the oceans absorb 93% of the excess heat those gases trap. The warming air and water are causing ice sheets to melt at unprecedented rates.

Besides sea-level rising, the melting of this ice sheet in Greenland has another side-effect- methane emissions, which has rapidly increased in the past decades and more than doubled from pre-industrial times.

Methane, or CH4, has a 20-year Global Warming Potential (GWP) of 84, which means that over a 20-year time period, it’s 84 times more powerful than CO2 at trapping heat in the atmosphere. Methane emissions are temperature-sensitive and could provide significant feedback mechanisms in a changing climate.

The Arctic region is one of the most abundant natural sources of methane. It is estimated that the Arctic permafrost (carbon-rich soils that remain completely frozen for at least two years straight) stores 1 650 gigatonnes of organic carbon, twice the amount of greenhouse gases in the atmosphere.

As the temperature rises above 0°C, microbes in the permafrost decompose frozen organic matter into methane, an anaerobic biotic process known as methanogenesis. Thawing of the permafrost produces both methane and CO2. A warming climate can induce environmental changes that accelerate this decomposition and release of greenhouse gases. This feedback can accelerate climate change, but the magnitude and timing of greenhouse gas emissions from these regions and their impact on climate change remain unclear. This makes it all the more concerning that ice sheets are currently ignored in global methane budgets and that there is no existing data on the current methane footprint of ice sheets.

A study conducted by the University of Bristol found that much of the methane produced beneath the ice likely escapes the GiS in large, fast flowing rivers before it can be oxidised to CO2.

A study estimated that 6.3 tonnes of methane was transported by meltwater underneath the ice in the summer of 2015. Every summer, the ice sheets melt in Greenland, peaking in June to August and although this is a natural process, global warming is accelerating the rate of melting. Subglacially produced methane is rapidly driven to the ice margin by the efficient drainage system of a subglacial catchment of the GiS. Another study reported a concentration of methane emissions 15 times the background atmospheric concentration in the air expelled with meltwater in West Greenland in 2016. The total amount of methane released with meltwater remains unestimated.

From 1992 to 2018, about half of the ice loss from Greenland was from melting driven by air surface temperatures, which have risen much faster in the Arctic than the global average (more than double), and the rest was from the speeding up of the flow of ice into the sea from glaciers, driven by the warming ocean.

While many studies place their focus on the West GiS, the satellite images produced from Sentinel- 5P have revealed another bright hot spot on the north, near the North Pole. 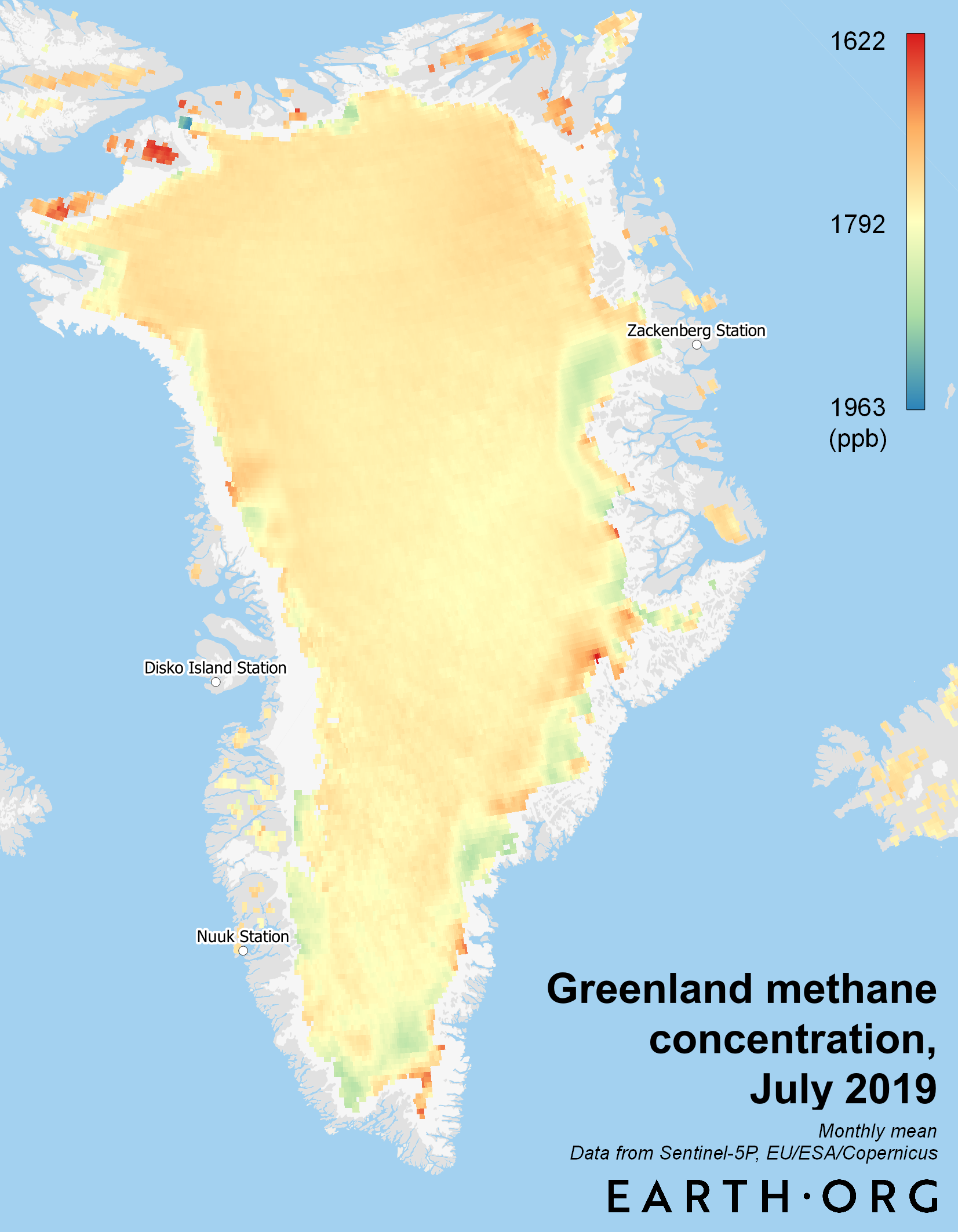 The image above shows the concentration of methane in Greenland in July 2019 according to images taken by Earth.Org from the Sentinel- 5P satellite. The mean methane concentration over Greenland during the month was 1 809.6 ppb (parts per billion), with a local maximum of 1 968.2 ppb.

Researchers suggest that the microbes in the frozen soil contain methane-oxidising communities, essentially making the tundra a methane sink. The effect of methane digestion increases with temperature, so it is particularly potent in the growing seasons (July- September).

According to a study conducted in December, Greenland’s ice is melting seven times faster than it did in 1992. From July 30 to August 3, melting occurred across 90% of the continent’s surface, dumping 55 billion tonnes of water over 5 days. On August 1, the GiS lost 12.5 billion tonnes of ice, more than any day since researchers started recording ice loss in 1950.

Melting seen at this rate was not expected for another 50 years; by the last week of July, melting had reached levels that scientists with the IPCC had projected for the year 2070 in the most pessimistic scenario.

The region has lost more than 4.2 trillion tonnes of ice in the last 25 years, which has raised global sea levels over 1cm. The rate of ice loss has risen from 33 billion tonnes a year in the 1990s to 254 billion tonnes a year in the last decade. The IPCC has estimated that global sea levels could rise by 60cm by 2100, putting 360 million people at risk of annual coastal flooding. However, this new study shows that if the current melt rate continues, Greenland will raise sea levels nearly 7cm more than the IPCC’s prediction by 2100, putting an additional 40 million people at risk.

One of the keys to reducing methane emissions in Greenland, and certainly the rest of the world, is cutting the use of fossil fuels. Additionally, there is too much uncertainty surrounding the impacts of these environments on the planet and they should be considered in the Earth’s methane budget so as to allow researchers and policy makers to collaborate to mitigate and manage the effects of these emissions.

This is the second of two parts in an Earth.Org investigation of methane emissions in the polar regions. See December 20th’s article, ‘Methane Emissions in the Arctic Could Amplify Global Warming’.